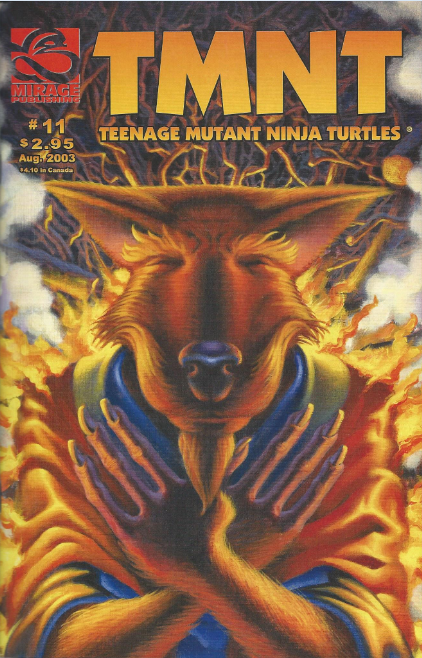 In Central Park, two women are enjoying a picnic together.  They make small talk until they’re beset upon by a gang of “goths”.  Those “goths” turn out to be vampires, who begin biting them all over.  One of the girls slips away and alerts two police officers.  When one of the cops makes it to the scene of the attack, however, the other girl is dead. 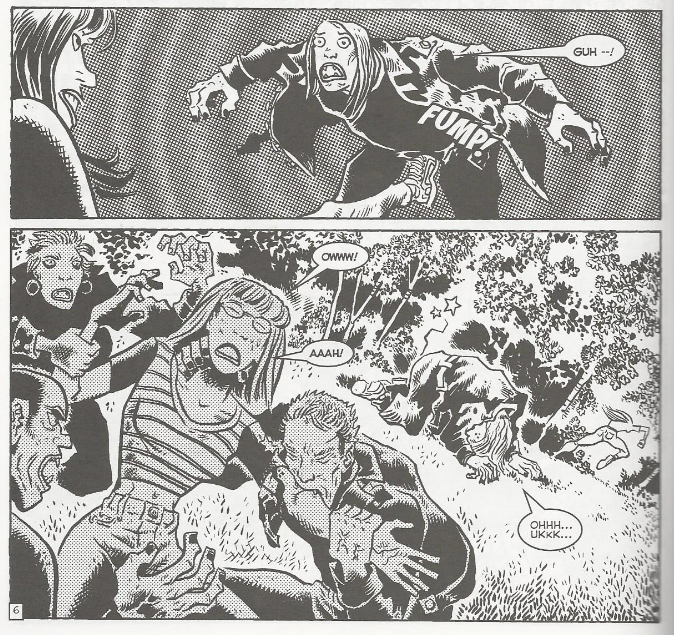 Later, somewhere else in Central Park, Michelangelo dives down into a pond and secures a tether (passing by an ordinary turtle as he does).  When he returns to shore, he finds Raphael angrily chopping wood as Leonardo loads it into the tethered boat.  Not far away, Donatello sneaks up to Splinter’s body and uses a pair of scissors to take something from it, apologizing as he slips away.

The funeral procession begins and the Turtles, the Jones family, the Justice Force, Professor Honeycutt and several other friends march through the woods and gather at the shore.  The Turtles act as pallbearers, loading Splinter’s body into the boat with the tinder.  They float it out to the middle of the pond and swim back.  Radical arrives late to the ceremony, having only recently received Leonardo’s message. 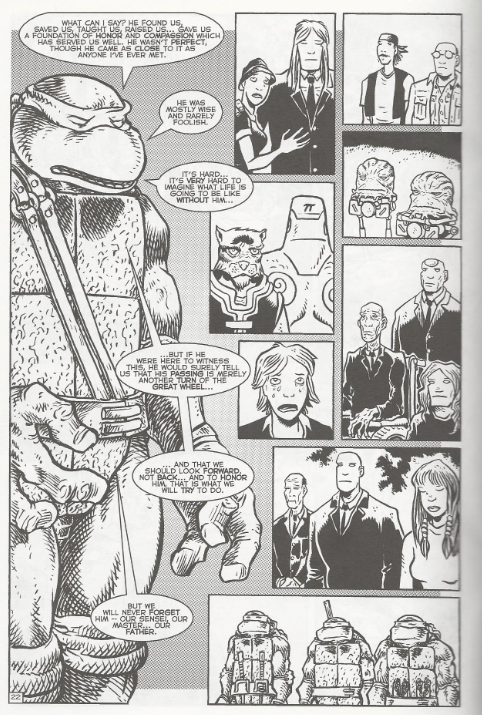 Leo gives Splinter's eulogy, describing the lessons their sensei imparted on he and his brothers.  He says that were Splinter to assess his own passing, in his wisdom he would recommend that his mourners look to the future rather than the past.  Leo would agree, though he assures all that none who had ever met Splinter will forget him.

Leo lights an arrow and prepares to launch it at the funeral pyre.  A light appears in the sky and the gathered prepare for a fight, but it’s only Renet.  She says that Splinter once showed her kindness when she needed it most and takes her place among the congregation (the Golem says something to her in weird gibberish, but she tells him to save it for later).  April looks at Renet and wonders if she might be able to help her as Leonardo lights the pyre and ignites his sensei’s body.  Raphael notices something stirring in the reeds and points it out to Donatello.  Apparently, Leatherhead heard the news and came by to pay his respects, albeit privately. 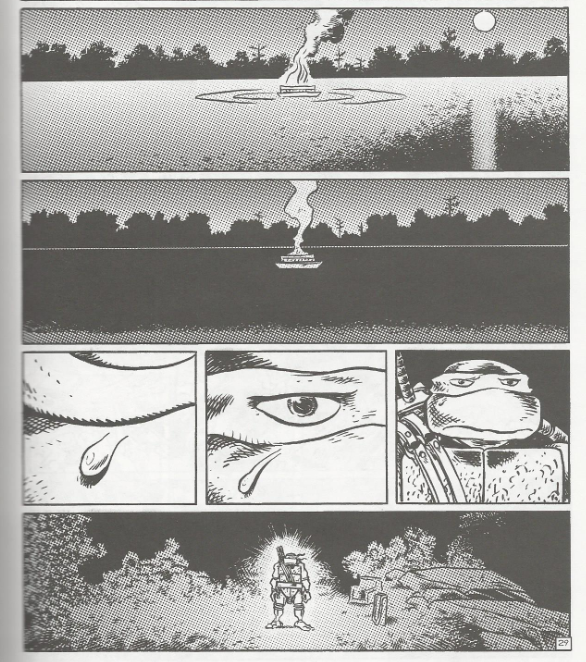 Hours pass and the gathered leave.  All except Leonardo, that is, who stays until the last embers of the pyre burn out.

Elsewhere in the city, several Foot Soldiers pursue a warrior wearing strange armor.  They lose him, only to find themselves the ones being ambushed.  The warrior cuts them all down, then leaves behind a triangular object before exiting the scene.

*Several stories take place between this and next issue.  For a potential listing, see my Mirage continuity timeline.

*Those attending Splinter’s funeral include:

*What “kindess” Splinter showed to Renet, and how she knows the Golem, have yet to be explained.  Renet will appear next in TMNT (Vol. 4) #14.

*The nature of what Donatello takes from Splinter’s body won’t be revealed until TMNT (Vol. 4) #32.

This issue marks something of a narrative breaking point for TMNT Volume 4.  This is the last opportunity in the serialized pace of the comic to offer a “breather”.  From here on out, every issue will flow into the next and you’ll never get a break.  All the characters will go their separate ways, perhaps as a reaction to losing Splinter and finally “growing up”, and the narrative will proceed to be pulled in 5 or 6 different directions.

Things are going to move SLOW from here on out.  Really, really, reeeaaallllllyyy sloooooooowwwww.

That isn’t to say the directions Laird takes the characters after this won’t be interesting.  On the contrary, many of the arcs will prove to be very thought-provoking.  It’s just that you’ll only get a few pages to follow them in each issue and breaking them up will make even the shortest of storylines take YEARS to resolve (spoiler alert: 12 years and counting and most of them aren’t resolved).

This is kind of where my patience with Volume 4 starts to unravel and my memory of its storylines begins to decay.  6 issues-worth of story is going to get stretched out over 20+ issues and man, it’s hard to stay enthusiastic amidst such doddling.  Throw in the multi-year hiatuses and only the most stout-hearted of Turtles fans will be able to give a shit beyond this point.

All that being said, it was a tasteful if bittersweet issue.  Splinter’s funeral is very quiet, yet spans 21 pages.  Leo’s eulogy only fills one of those pages, so most of it is just a lot of sad people standing around, looking at their hands.  But it feels appropriate.  Have you ever been to a funeral?  They aren’t exactly a laugh riot.

What struck me at first was that only Leo offers a eulogy and it’s a fairly short one.  Laird could have easily had every character take turns giving a speech, but it isn’t necessary.  Leo sums it up in just a few sentences and you know that everything coming from “sensei’s pet” is genuine and sincere.  No one could really add to what Leo has to say so we leave it at that.

You’ll also probably notice that a handful of those in attendance are completely new faces.  Volume 4 is seeded with “in a tale yet to be told” editorial boxes, or just non sequiturs, with the intention that all those gaps would be filled in via the then-upcoming Tales of the TMNT Volume 2.  While many of those untold tales were covered, others were left dangling (I guess 70 issues wasn’t enough to cover them all?).

While the Golem got an origin, his relationship to Renet was never explained.  Likewise, how Splinter showed Renet kindness when she needed it most was never elaborated upon.  Then there’s the mysterious cat-guy whose identity has never been revealed.  Perhaps he was the superhero named Meta-Beast who was mentioned (but not shown) in TMNT (Vol. 4) #4?  At this point, there’s a better than even chance we’ll never find out.

Eastman’s and Laird’s presence was appropriate; sort of like how Jack Kirby and Stan Lee used to draw themselves into issues of Fantastic Four, usually during milestones (like the wedding of Mr. Fantastic and the Invisible Woman).  What’s unintentionally hilarious is that Eastman and Laird inserted themselves into the TMNT comics once before… as muggers.  I guess from an in-universe perspective their encounter with the TMNT turned their lives around and so they felt obligated to pay their respects to Splinter?  It’s funny when you think about it too hard.

Then there’s Leatherhead, who seems to have reverted back to his “feral” personality.  When last seen, he was in his “scientist” getup, so whatever caused him to go crazy again remains unknown.  But then, that guy moodswings so much you probably don’t need an explanation for it.

As for Radical, I forgot that she shared a single exchange with Leonardo, having gotten the message about the funeral directly from him.  That little back and forth was all it took for future writers to decide they were madly in love and build a whole romance around it (for one issue).  The stuff of shipping fanfics made canon!

I don’t think any major Mirage protagonist was left out of the funeral, which sort of makes the Mirage roster seem slim, doesn't it?  The fact that Laird had to make up new characters from whole cloth just to fill seats should tell you something.  Likewise, Splinter hadn't been relevant to the series for so long that he also had to make up references to stories that never happened just to justify most of those guest characters mourning him.

Other plot threads are initiated in this issue, from the weird warrior guy to the goth vampires to whatever Don is doing with Splinter’s corpse.  I’m looking at this issue twelve years later and I regret to inform you that most of these plot threads go absolutely nowhere.

Anyhow, all snark aside, this was a wonderful issue.  It may be the last full issue of Volume 4 that I like.  From this point on, when Volume 4 is great it'll only be for short bursts rather than for full issues.  The fun’s over.  The rest of this run is gonna read like homework.

Oh Splinter, you really WERE the life of the party…