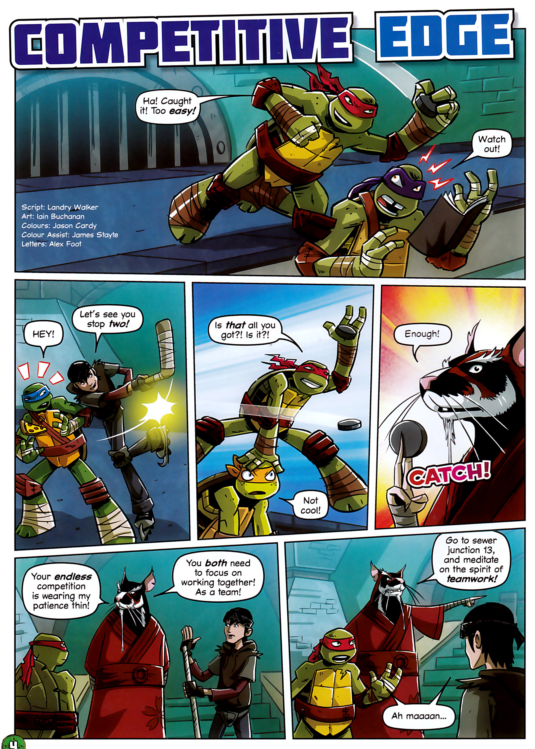 Down in the lair, Raph and Casey are challenging each other to a marathon of competitions and getting in everybody’s way in the process.  Fed up, Splinter orders them to leave the lair and develop their teamwork exercises through meditation until they’ve become less competitive.  At sewer juncture 13, Raph and Casey are seeing who can meditate better when Kurtzman buzzes them on the tPhone.

They meet him on a rooftop, and although he was hoping for the WHOLE team, they assure him that they can handle it on their own.  Kurtzman points out a pet shop being looted by the Kraang who intend to experiment on all the animals.  Seeing this as their opportunity to prove to Splinter that they can work as a team, Raph and Casey leap into action. 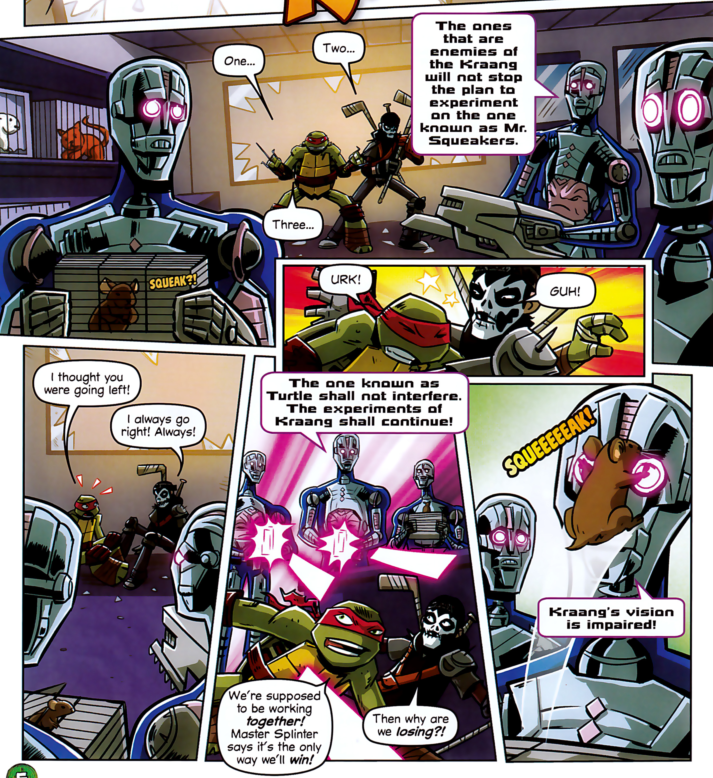 The pair confront the Kraang, but only proceed to get in each other’s way.  With things looking grim, Raph hatches a plan; to use their competitive spirits to their advantage.  He bets Casey that he can save more pets and Casey, seeing what Raph’s up to, accepts the challenge.  Keeping score of how many animals they save, they wipe the floor with the Kraang.  However, the problem remains that the Kraang might come back and purloin the pets at a later date… 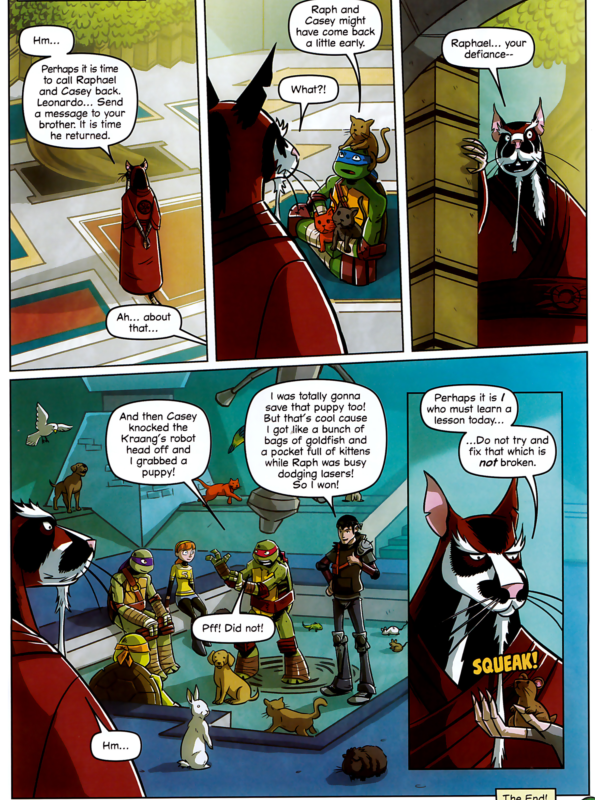 Back in the lair, Splinter asks Leo to fetch Raph and Casey so he can see what they’ve learned.  Leo, covered in cats, tells him that the pair have already returned.  Splinter storms out into the living room and finds the lair populated with all the pet shop animals.  He’s about to berate the two, but overhears their bragging to the other Turtles and April about how they worked together to rescue the critters.  Splinter sighs and decides that the lesson HE should take away from all this is “don’t fix what isn’t broken”.

*This story is continued from TMNT Magazine (Panini) #21.  The story continues in "Whodunit".

This was one of the short-form strips, but Walker condenses everything nicely and the pacing and humor work really well.  I think my favorite gag involved the Kraang all identifying the pets by their silly names (“Squeakers”, “Barkly”), but doing so with their laborious method of speaking.

The resolution, that Raph and Casey can use their competitive natures to actually ENHANCE their teamwork, was a nice twist, too.  Landry Walker’s pretty good at these kinds of stories that organically fuse the characters with the conflicts and don’t have to linger on any manufactured flaws.  He’s actually better at it than some of the writers for the cartoon.  There’s a season 2 episode that really got under my skin, “Newtralized”, where the conflict extended from Casey being a bumbling oaf who always screwed up the missions… a characterization he never had before or after that one episode.

The writer was clearly going for one of those “make a case for the comic relief” episodes, but Casey was never the kind of comic relief character whose existence needed to be justified (at least not in the Nick series).  So it wound up being this random moment of total mischaracterization just to enable the plot.  Walker does the idea better with this story, where Casey AND Raph both prove a liability due to character defects they ACTUALLY exhibit.  Like I said, it’s much more organic and faithful to the characters while getting the same point across.

Walker does a better job of it in 6 pages of a tie-in comic than Gavin Hignight (writer of “Newtralized”) did in twenty-two minutes of the cartoon it was based on.