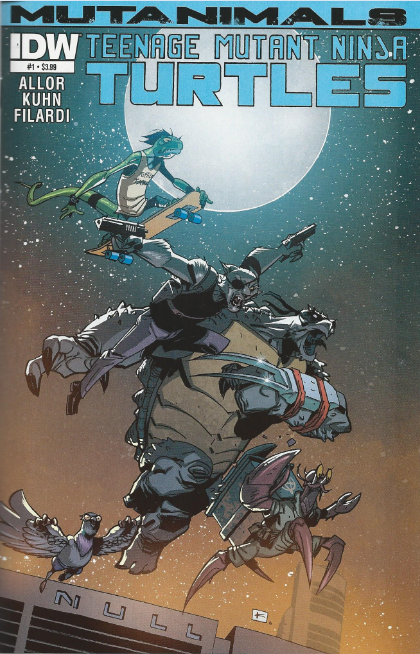 Lindsey is out for a walk with Pigeon Pete as her chaperon when they’re attacked by a group of strange men (the leader wearing an eye patch).  Lindsey tries to call Old Hob and leaves a partial message before she and Pete are thrown into the back of a van. 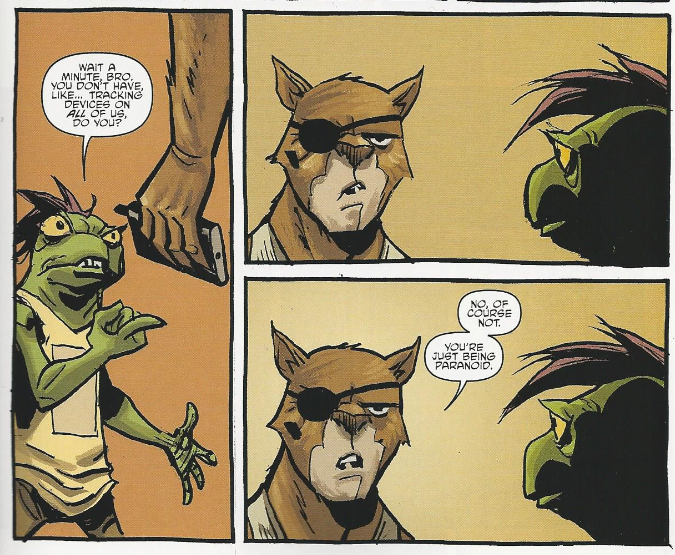 At Mutanimal HQ, the mutants are just returning from their raid on the Foot Clan.  Hob gets Lindsey’s message and rallies the troops to go rescue her and Pete.  They use a tracking device Hob implanted in Pete after the Bebop and Rocksteady incident to track him down.

Lindsey and Pete are unloaded at a Null Group facility where Lindsey is greeted by her ex-girlfriend and ex-research partner Jillian.  Jillian wants to offer Lindsey a job with the Null Group and promises that Pete will be returned to the streets safely (secretly, she tells the eye-patch man to take him to the rail yard).

Jillian gives Lindsey a tour of their lab and tells her that she’d be better off working for the Null Group than running around with a psychotic gang.  She says that the Null Group worked for the Foot Clan, helping them create the mutants they have in their forces.  With the resources provided by the Null Group, they can make far more progress in mutagenic research than ever before.  Lindsey considers the offer. 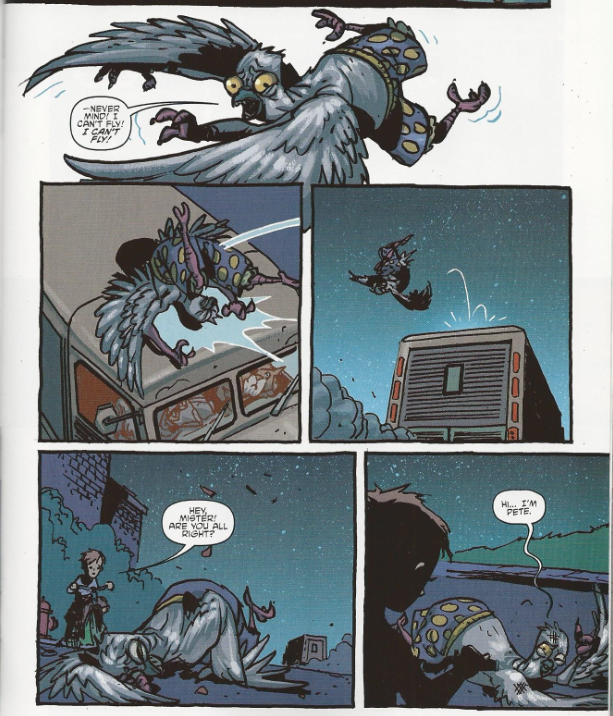 On the highway, the Mutanimals attack the Null Group van with their own van.  Herman the Hermit Crab shoots off the lock on the enemy van’s rear door and Pete attempts to fly to freedom (he crashes, but Hob says to leave him since now he’s safe).  They chase down the Null van and crash it against lamppost.  Mondo Gecko chases down the eye-patch man and Hob checks out his wallet, learning his name (Mr. Meiring), address and how many kids he has.  Hob threatens Meiring’s family and the man reveals where they took Lindsey.  Slash doesn’t seem to like this side of Hob.

The Mutanimals crash the Null facility and as soon as Hob sees the lab, he has flashbacks of the time he was experimented on by Baxter Stockman.  He orders the Mutanimals to trash the lab and kill everyone in it.  Lindsey helps Jillian escape through the back door while Jillian calls her boss to tell him about the attack.  In an office somewhere, a shadowy figure with what appear to be horns on his head gets the message. 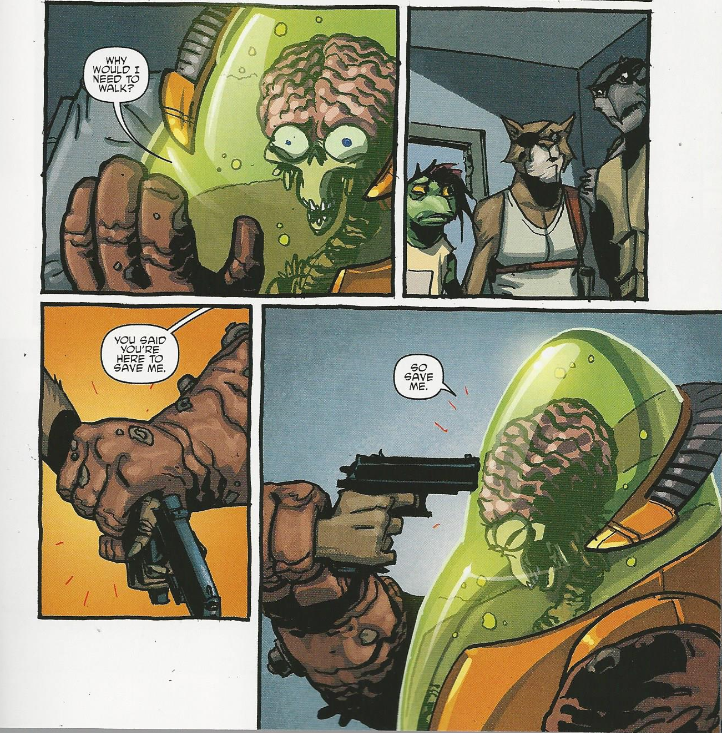 Hob and the Mutanimals continue their raid on the lab, eventually coming to a locked room.  Inside, they find a creature that’s nothing but organs held together in a make-shift “jar”-like torso with mangled limbs attached to the trunk.  Slash reads the chart and discovers that he’s codenamed “Mutagen Man” and he was an attempt to combine numerous different mutant types.  Mutagen Man begs to be killed, but Hob won’t do it and instead they escape with him in the van.

*This story takes place after TMNT (IDW) #43.  The story continues in TMNT: Mutanimals #2.

*The Mutanimals got into a fight with Bebop and Rocksteady in TMNT (IDW) #39.

Alright, the Mutanimals are finally up and running in their own storyline!  Color me psyched.  TMNT (IDW) #16 was when it all started, Hob recruiting Slash as the foundation of his “mutant army”, and that was just over two years ago.  It’s been great watching Hob build the Mutanimals a little at a time over these two years; gathering resources, making connections, figuring out how to work the ooze/mutagen/psychotropic serum, swelling his ranks and so on.  It’s been a slow development, but we’re here.

Since Hob began referencing his desire to have a mutant army (somewhere during the “City Fall” arc), that’s sort of led us readers to assume that there’d be some kind of mutant war in the title’s future.  I mean, what’s the purpose of having an army if there’s no war to fight in, right?  With Hob’s last words in this issue, that war is officially on.

Against some guys called the Null Group.  Who didn’t exist until just now.  Hm.

That’s the one thing I suppose I take issue with.  I mean, I think it’s fucking awesome that Allor dug up Null and his sinister corporation from the Archie Comics Mighty Mutanimal book, don’t get me wrong.  But within the vacuum of the IDW series, this is the first time they have ever been mentioned.  It’s clear to the reader that they were a more recent development; so recent, in fact, that their mere existence couldn’t have been referenced in any previous issues of the ongoing series.

So there’s sort of some retconning and exposition going on and not all of it is graceful.  Right from the first page, Pigeon Pete is referencing Null products and later, when Jillian gives Lindsey a tour of the lab, she clumsily tells her about the Null Group and what a huge corporation it is.  It’d be like if you were in Atlanta and a friend said, “Hey, want to take a tour of the Coca-Cola bottling plant?  You know, Coca-Cola?  The giant soda manufacturer and one of the largest corporations in the world?  You’ve heard of them, right?”

All that is done to explain what the Null Group is to the readers because, prior to this issue, they did not exist within the universe of the IDW comic.  It would have been a little more organic if the Null Group had been seeded, even subtly as background Easter eggs, in previous issues if only to save us from so much awkward exposition.

That said, Allor works them into the mythos of IDW’s TMNT series to make it seem like they were there all along and aren’t just a sudden invention.  Apparently, they helped the Foot Clan make their mutants, which helpfully ties up at least one dangling bit of logic (how did a group of assassins know how to perform complex genetic mutations?).

The big character reveal in this issue is Mutagen Man, of course.  In the various cartoons he’s appeared in, he’s been portrayed as a huge dork who gets accidentally turned into a hideous pile of disembodied organs suspended in a tank of ooze.  This origin deviates from the idea of Mutagen Man having a previous identity and actually takes cues from Peter Laird’s original pitch, when the character was called “The Unknown” (still love that name): 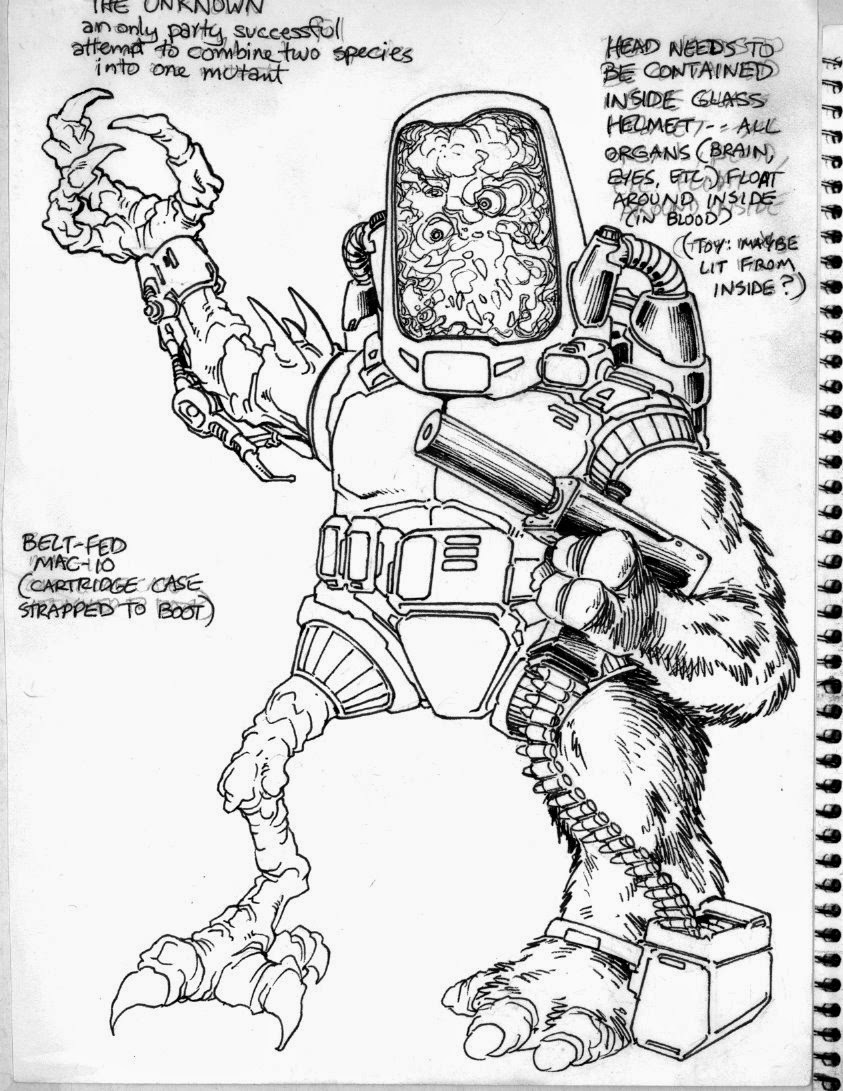 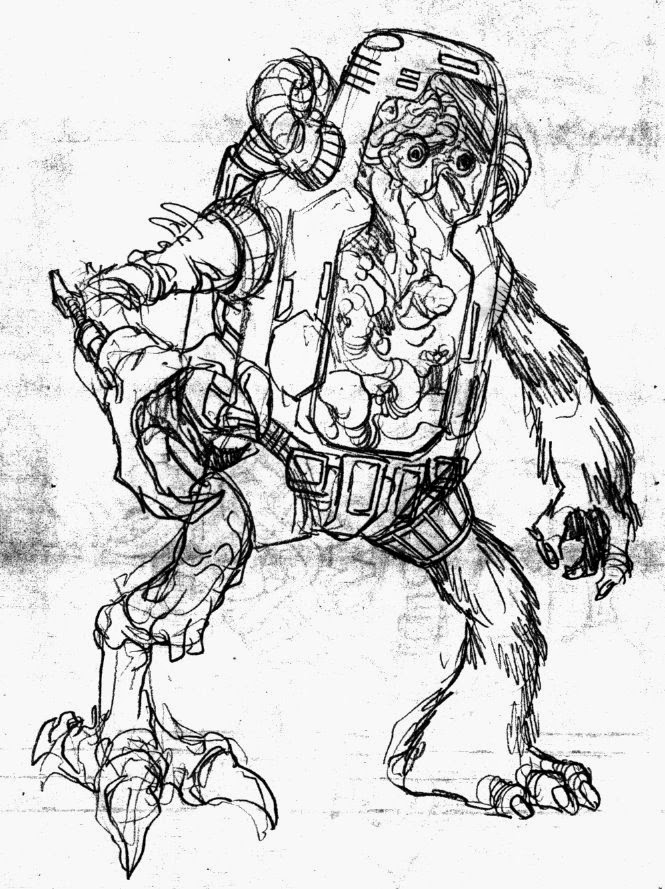 As you can read for yourself, Laird originally intended him to be a failed attempt to combine several types of mutant animals.  Allor dips into that bit of obscurity and we have a darker and more tragic sort of Mutagen Man (as horrific as his origin in the cartoons was, it tended to be played for laughs regardless).

Collectively, IDW’s Mutanimals are sort of a celebration of the Ninja Turtles brand across all its many incarnations.  You have Fred Wolf and Archie characters, Movie characters (IDW’s Slash has always been a fusion with Tokka), Nickelodeon characters and original IDW characters.  There’s a little bit of everything in this roster, except the Mirage and 4Kids series, but they deliberately avoided mutants so there isn’t much to work with from them.  Though hey, maybe if Hob becomes less of a bigot later on, Angel/Nobody can join up and then we’ll have both the 4Kids and Mirage series covered.

All in all, aside from the spontaneous existence of the Null Group and some clumsy exposition trying to convince us that they’ve been there all along, this was a pretty perfect issue.  Lots of humor mixed with action and drama.  Surprises, too.  I’m gonna hate it when the miniseries ends and the Mutanimals have to go back to being supporting characters in the ongoing series.