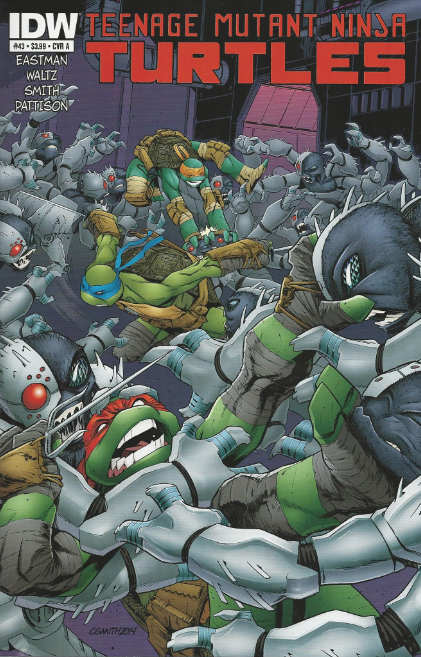 On Burnow Island, the Foot and General Krang’s army throw down.  While Koya and Bludgeon take on Tragg and Granitor, Krang pays Shredder back for sinking his ship.  Shredder is still bewildered that Krang was ready for him and the General mocks him for being betrayed.  The Turtles observe this and use the confusion to slip away so they can find the Fugitoid. 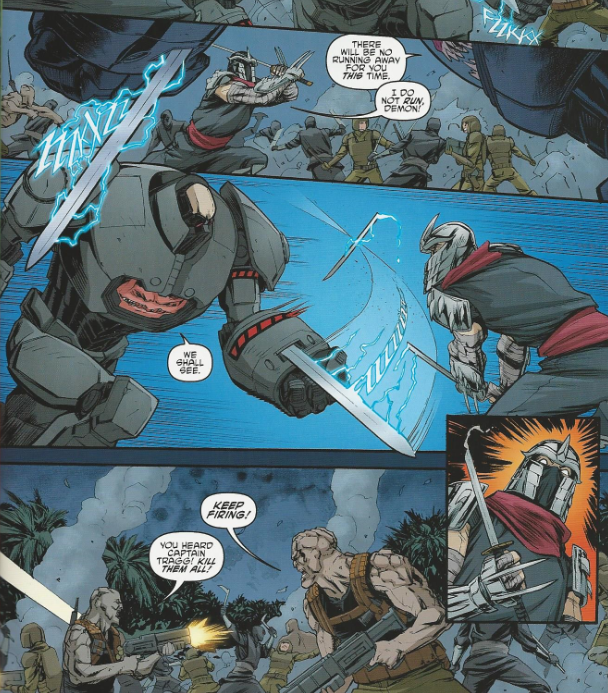 In their holding cell, Baxter Stockman reveals to the Fugitoid that he’s had a secret plan going all along.  When his Flyborg tapped into Krang’s computer system some while back, he downloaded the Technodrome’s schematics.  From there, Baxter uploaded malware into the system that would activate one minute after the Technodrome was switched on.  Baxter would then be able to seize control of the device for his own ends (though even one minute of terraforming would be long enough to kill thousands of people).

The Fugitoid won’t let Baxter get away with this and uses his holographic projector to take on the guise of Chet Allen.  He tricks the guards into thinking the Fugitoid has escaped and open the door.  Baxter has his own escape plan in motion, though, and dozens of mini-Mousers pour out of an air vent and shock the guards and the Fugitoid unconscious. 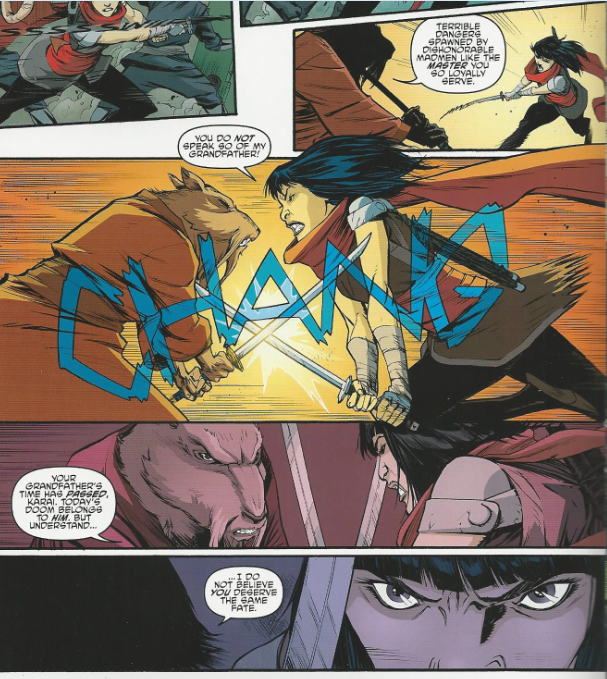 Back at Foot HQ in New York, Karai and Hun are suddenly besieged by Hob’s gang and Splinter.  Herman, and Mondo Gecko make short work of the Foot Soldiers, while Slash goes toe-to-toe with Hun (who wants revenge for the sucker punch Slash gave him earlier).  Slash takes Hun down with ease.  While all this is going on, Splinter locks swords with Karai and tells her that her grandfather’s time is over.  However, he expresses hope that she not suffer the same fate as him.

During the confusion, Hob slips into a backroom and raids it of all its ooze/mutagen.  Now having what he came for, he orders his gang to retreat, leaving Splinter behind to fight Karai alone.

Inside Krang’s base, the Turtles tear their way through the guards only to be confronted by Baxter and his army of Flyborgs and mini-Mousers.  They see he has the Fugitoid held captive and dive into the fray to save him. 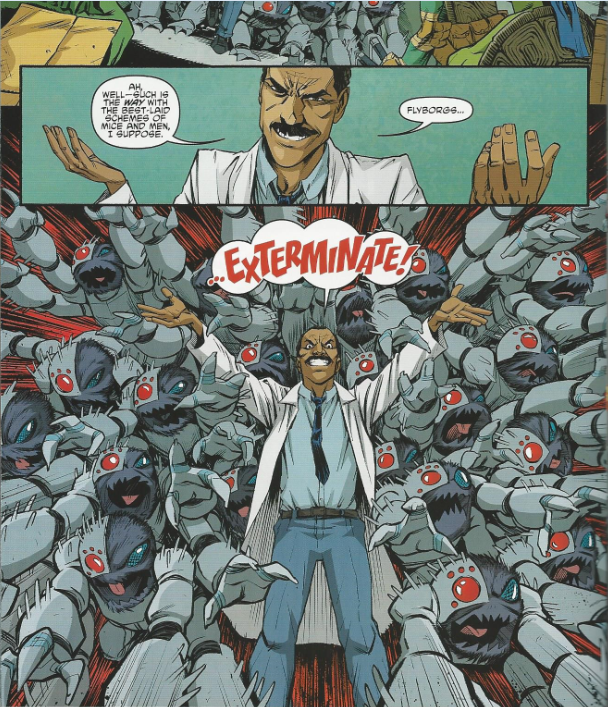 Outside, Krang receives word that the base is being invaded and Baxter has holed up in the Technodrome control room.  Krang leaves the pummeled Shredder behind and rushes to his base.

Inside, Baxter is about to activate his malware when Krang interferes, knocking Baxter out.  He then has his technicians reroute control and activate the Technodrome.  The Turtles, overwhelmed by Baxter’s forces, are helpless to do anything as the giant eyeball sends out a blast of terraforming energy.

Meanwhile, knowing that he has been betrayed by the Turtles, Shredder sends a message to Bebop and Rocksteady to kill Donatello.

*Shredder sank General Krang’s ship in their previous encounter, in TMNT (IDW) #37.  Shredder saw a vision of his war with Krang in TMNT Villains Micro-Series #8: Shredder.

*Baxter Stockman used his Flyborg to steal the schematics of the Technodrome in TMNT Villains Micro-Series #2: Baxter.

*The events of the Mutanimals miniseries spin-out from this issue.

*This issue was originally published with 3 variant covers: Cover A by Smith and Pattison, Cover B by Eastman and Pattison, and Cover RI by Aaron Conley.

Now, I know I criticized the pacing of the first half of this arc; it was all set up to get us HERE.  But now that we’re HERE, I’m having a blast.  I kinda wish we could be HERE all the time, but then if we were, I guess HERE wouldn’t feel quite so special.

All the mingling plot threads have finally collided head on and it’s pretty much madness the whole way through.  What’s great is how much action there is in this issue, yet the story still moves forward.  This isn’t just an “everybody fights” issue.

I suppose my only grievance has to do with the Fugitoid being duped by Baxter.  I mean, who didn’t see that coming?  It may have been a shock to the Fugitoid, but it wasn’t one for the audience.  And, really, why on Earth would the Fugitoid be surprised that Baxter betrayed him?  That’s all Baxter DOES, for pity’s sake.

Their subplot in this arc basically consisted of “betrayals within betrayals” and every time before now when it seemed like Baxter was throwing Fugitoid under the bus, it was all a part of their scheme to trick Krang.  By the time the REAL betrayal finally came around, the story had cried wolf one too many times and I was just sort of sick of the whole exercise.

But that’s my only substantial complaint with this installment.  I loved seeing the Mousers again and I dig it when media keeps those guys around as part of Baxter’s entourage beyond their initial appearance.  The Mousers, iconic TMNT foes as they may be, rarely continue on past their debut (be it in comics or cartoons), so it always feels kind of special when they show up again.

I didn’t so much care for the Mutanimals so quickly agreeing to ditch Splinter on Hob’s say so.  I guess the intent was to show how loyal they are to Hob (even though they question ditching Splinter at first), but would Slash really be okay with leaving the father of one of his closest friends to die?  And Mondo seems like way too nice of a guy to follow up abandoning an old man to certain death with a vacuous catch phrase (“Lead the way, Jefe!”).

That said, I’m pumped for the Mutanimals miniseries.  The first issue came out the same day as this one, so I’ll be reading that next.

As for Splinter, his words to Karai have me interested.  Way back when I reviewed Karai’s micro-series issue, I mentioned that IDW’s version was missing the one thing that linked all the disparate incarnations of Karai together: A sense of sympathy for the Turtles.  Every Karai has been wildly different from the others, save for that single bit of characterization.  To date, IDW Karai is the only one who has lacked it which has sort of made her feel like Karai in name only.

Splinter expresses a sense of hope that she won’t follow the same path as her grandfather.  Is this the start of some sort of cooperative relationship between Karai and the Turtles, similar to the ones she’s had in every other portrayal?  I don’t think Karai is in need of being “redeemed”, mind you (she’s murdered wayyyyy too many people in cold blood to ever qualify for “redemption”), but I would like to see a play on her consistent trait of working with the Turtles.  Maybe the writers will take it in a different direction and have her manipulate and use the Turtles under the guise of cooperation?  But then again, I think we’ve gotten enough of that betrayal stuff with this Baxter/Fugitoid plot thread.

Lastly, I enjoyed seeing Krang just beat the SHIT out of the Shredder.  It’s a sobering reminder that the Shredder isn’t the unstoppable ultimate villain he’s often made out to be.  In fact, it’s very consistent with the IDW series.  The Turtles whooped Shredder with relative ease when they fought him in TMNT (IDW) #12.  However, they got comparatively wrecked in their battle with Krang in TMNT (IDW) #20.  Krang really is the stronger adversary in this universe and his fight with Shredder in this issue reminded us all of that.

Anyhow, while the book still reads like it’s written for the trade, this arc has really geared up in the back half as I knew it would.  THIS was the part I’ve been twiddling my thumbs for over the past couple months.

Grade: B+ (as in, “By the way, I really appreciate that Cory Smith doesn’t draw the Turtles with dopey buck teeth and freckles and huge glassy eyes.  As much as I like Santolouco, he’s been sugar-coating his Turtle designs more and more over the past few arcs and it’s starting to bug me”.)