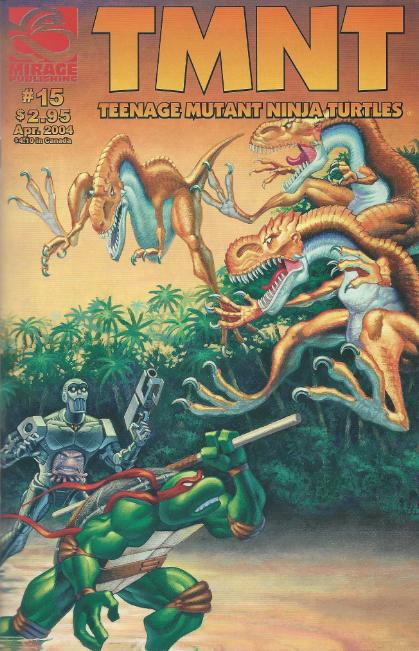 Route 101, New Hampshire.  Michelangelo and the Regenta have ditched the Styracodon bodyguards and headed out on the open road for some private fun.  Mikey takes her to a greasy spoon he’s particularly fond of and the two bond over lunch. 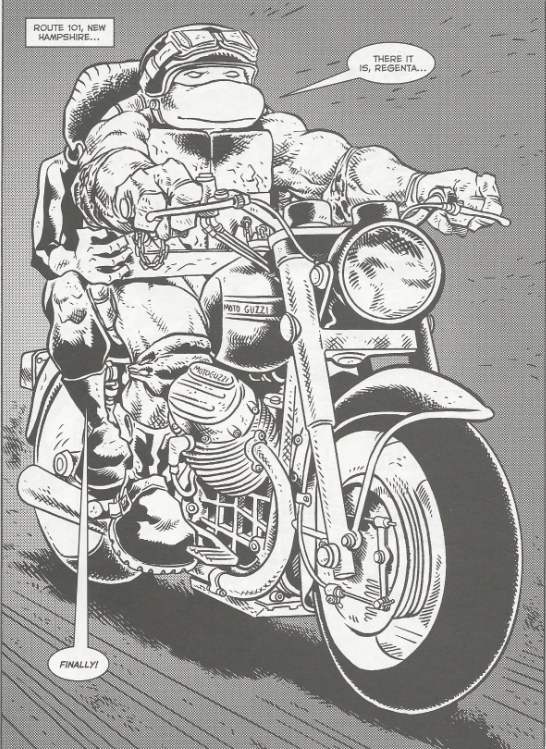 At Kurtzburg, the security forces race to intercept Raphael, who has now mutated into a hulking monstrosity (“Gameraph”).  Fugitoid, in his giant robot form, tries to subdue Raph, only to get tossed out the side of the building.  He shrinks down to his regular robot body and deploys his jetpack before hitting the pavement.  He flies back into the building, only to be swiftly decapitated by Raph. 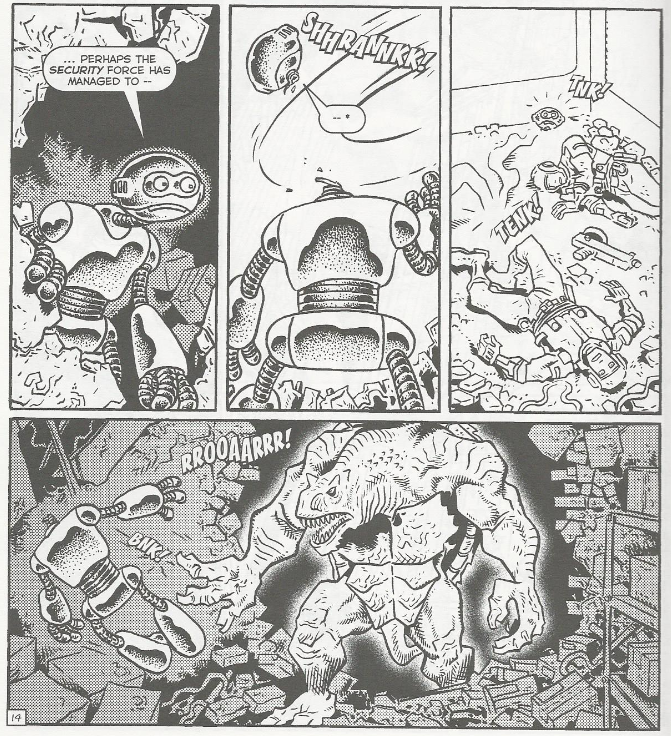 Raph begins to climb down the outside of the building when Raptarr shows up with a stun laser rifle.  He tries to coax Raph into surrendering, but the monster pounces on him, pins his wings and body-slams him into the pavement after dropping several stories.  Raph then brutally snaps Raptarr’s wings before grabbing the stun rifle and blasting him point-blank in the chest.  With Raptarr down, Raph stomps away into the streets. 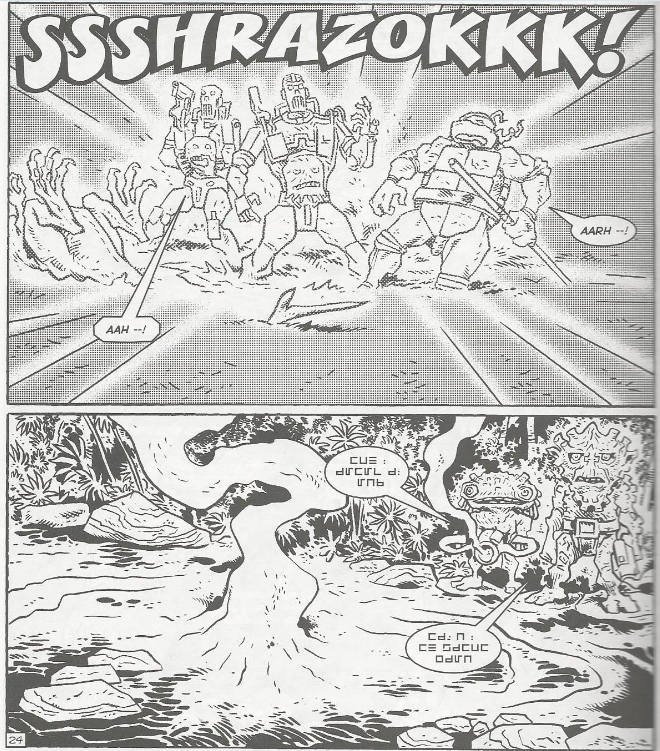 At the tepui, Donatello and the Utroms are ambushed by more of the velociraptor-like creatures that talk like Gollum from Lord of the Rings.  The Utroms are ready for them and use their stun lasers to kill all but one of the dinosaurs.  They get ready to take the monsters back to the anti-grav tug when more of the wood-creatures appear from the jungle.  Before Donnie and the rest can react, the wood-creatures blast them with a strange device and they vanish.

At a Foot warehouse in New York, Leonardo and Karai lay in wait for another attack from one of the mystery warriors.  Leo asks why she’s so sure the warrior will attack this warehouse, and Karai says that they seem drawn to a product that the Foot have begun printing through one of their publishing firms. 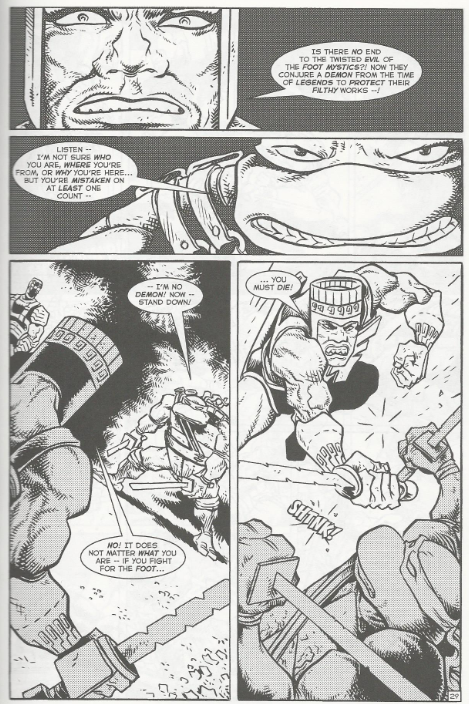 On cue, the warrior appears and begins tearing apart the Foot Soldiers.  Leo attacks and the warrior mistakes the Turtle for a demon conjured by the Foot Mystics.  Leo corrects him, but the two battle anyway.  The warrior’s maquahuitl blade snap’s Leo’s katana and gives him the upper hand.  Leo falls to the ground with the warrior poised above him, ready to deliver the finishing blow.

Back at the tepui, Donatello and the Utroms awaken to find themselves being hesitantly greeted by the missing explorers.  The explorers are unfamiliar with aliens and think that they’re “more monsters”.  Before a fight can break out, they’re all frightened into submission by the sudden appearance of the wood-creatures… only now they appear to be several hundred feet tall.  Even weirder, Don and everybody else seem to be imprisoned inside a big glass terrarium habitat.

*Raptarr last appeared in TMNT (Vol. 4) #3.  The explorers of the tepui went missing in that same issue.

*The idea of “Gameraph” was adapted two years later for the fourth season of the 4Kids TMNT cartoon, spanning a 3-episode arc between “Adventures in Turtle Sitting” and “Good Genes” parts 1 and 2.  In that version, however, it’s Donatello who mutates into the “Gamera” monster.  Likewise, the Playmates action figure produced for the character was of Donatello (though you can substitute it for Raph if you’re so inclined).

To give credit where credit is due, this issue was one of the better-paced installments in post-Splinter Volume 4.  Everyone (except April and Casey) get a good chunk of page-space to progress their arcs and no one seems ripped off by anybody else.  It might have to do with the fact that this issue was 37-pages, so there was more space to share between them.

To start with Michelangelo, on face value he seems to have gotten the least attention, but for now his arc involves developing a relationship with the Regenta.  While it starts out a bit spontaneous (they just met last issue and already they’re chummy enough to want to ditch the bodyguards), it grows at a steady rate.  The only real downer is that Laird spends a page and a half shilling for Moto Guzzi.  Did you know that’s his favorite motorcycle manufacturer?  Don’t worry.  He’ll remind you on many more occasions.

We also get our first look at the fully mutated “Gameraph” with this issue.  Now, admittedly, this plot will go nowhere and accomplish absolutely nothing.  It’s one of the worst aspects of Volume 4; just a total waste of time and talent.  BUT, when Volume 4 was first being published and we didn’t know how things were going to turn out, I thought this shit was really exciting.  Raph’s escape from Kurtzburg is positively brutal, as he wrecks the Fugitoid and Raptarr.  Yes, Raptarr was mostly a non-character who hadn’t been seen for 11 issues and hadn’t done anything worthwhile even when he DID appear… but it was a pretty vicious moment, nevertheless.

Leo’s making some more ground with the Foot Clan mystery.  Now we know that the warriors are intelligent enough to speak English and they’re specifically targeting something the Foot is publishing.  The warrior mentions the Foot Mystics and believe it or not, that little tidbit will be important later on.

Donatello’s arc also revives characters we haven’t seen for 11 issues.  Remember when Ken and his team of explorers went missing?  Yeah, I don’t blame you if you forgot.  Also, I hope you liked seeing Donatello at full height, because I’m speaking to you from the year 2015 and he STILL hasn’t gotten back to normal.

Also, the obnoxious Gollum-raptors make another appearance and thank God, most of them are dead now.  Laird mentioned in the letters page of the previous issue just how much he looooooves Peter Jackson’s Lord of the Rings movies, so ten guesses why the raptors talk like Gollum (they even say “preeeecioussssss”).  It isn’t because it was organic to the narrative or served any sort of purpose… The raptors talk like Gollum because Laird was on a LOTR kick and that’s it.

I’ve skimmed fanfics better than this.