The Flavor of Fear: Part 2 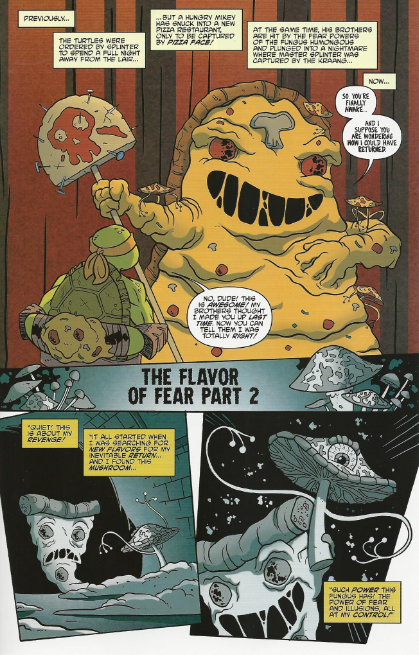 With his hands bound by pizza dough, Mikey is brought before Pizza Face.  The villain explains that after their last encounter, he began sending his pizza scouts out to search for powerful new ingredients so he’d be ready for a rematch.  While searching the sewers, one found the last remaining fear mushroom which he used to poison Mikey’s brothers.

Meanwhile, Pizza Face also set up this fake restaurant.  He’s let all the zombified patrons go, but with coupons and the lingering belief that his food was delicious.  Soon they will return with all their family and friends, and then Pizza Face will bake them into a giant pizza with his Mega-Pizza Kitchen of Ultimate Evil and eat them. 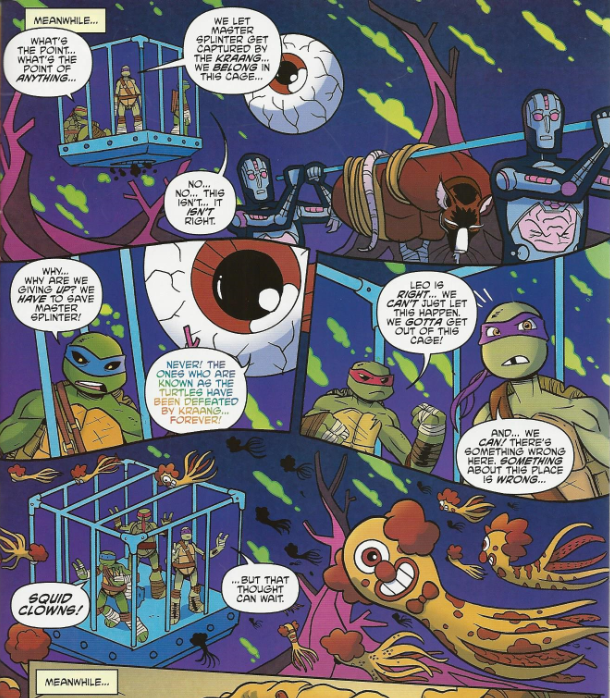 Elsewhere, Leo, Don and Raph are busy with their fear mushroom-induced hallucination.  They believe they’re trapped in a cage in Dimension X and Master Splinter is being taken away by the Kraang.  They manage to snap out of their despair long enough to kick the cage open, only to be attacked by squid-clowns.  The squid-clowns then dump them into a maze where a giant eyeball watches their every move. 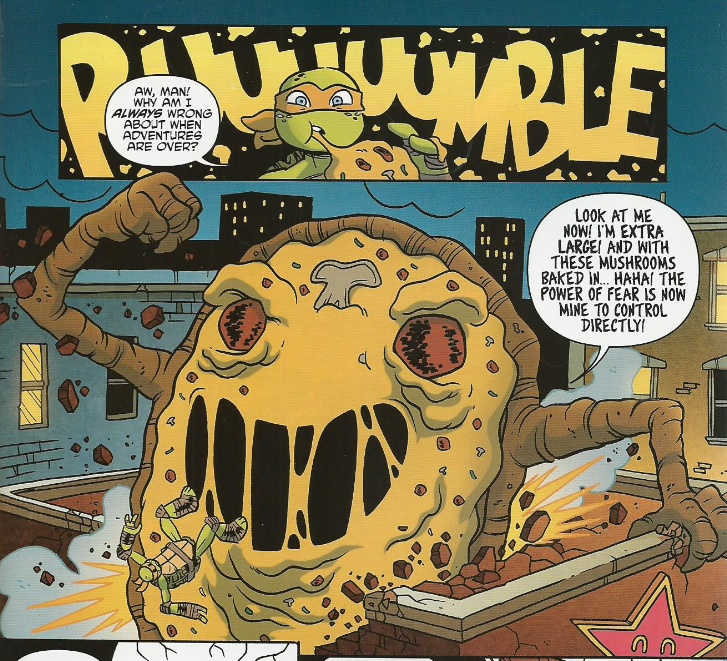 While this is going on, Mikey kicks Pizza Face into his own oven.  That was a big mistake, as the oven bakes Pizza Face into a giant pizza with the fear mushrooms now incorporated into him, allowing him to use their fear powers directly.  The giant Pizza Face then grabs Mikey.

In the hallucination, all the Turtles have succumbed to despair.  Leo manages to rally and attacks the giant eyeball, which transforms into a giant fear mushroom.  He stabs it and in reality he stabs the fear mushrooms topping the pizza he bought.  Killing the main fear mushroom starts a chain reaction which destroys all the smaller ones, including the ones in Pizza Face.  The giant Pizza Face explodes as all the Turtles come out of their trance.  Of course, since none of them were in their right mind at the time, they refuse to believe Mikey’s story about Pizza Face (having not believed him the first time, either). 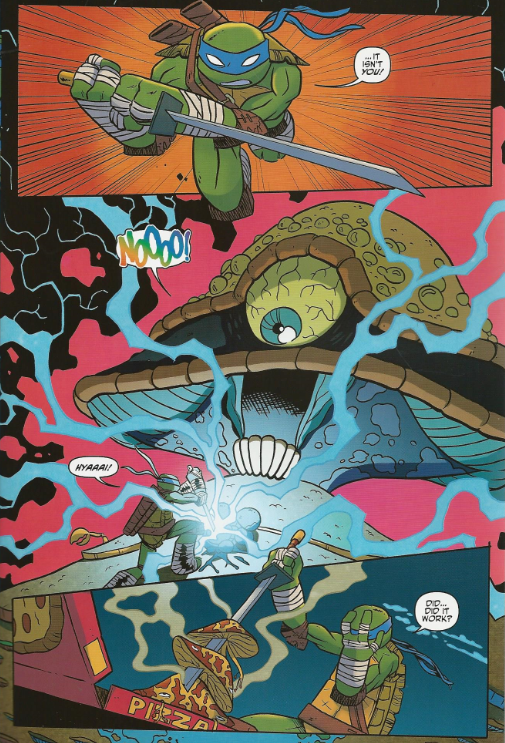 They return to the lair and explain themselves to Splinter.  He has a surprise waiting for them: A mushroom pizza from that new restaurant.  The Turtles all decline and Splinter eats it on his own, not noticing an eyeball in a mushroom slice.

*This story is continued from “The Flavor of Fear: Part1”.

We’re currently experiencing a Pizza Face Renaissance.  Things are finally going my way.  I should buy a lottery ticket.

This last half of “The Flavor of Fear” ends maybe a little abruptly, but it was still a fun story with lots of bizarre visuals from Chad Thomas.  Because of all the pizza monsters and hallucinations, he was able to get really weird in this one, so it’s a lot of fun to look at.

And points to writer Landry Walker for coming up with a means to keep the other Turtles from believing Pizza Face existed, so as not to disrupt the continuity of the cartoon.  The fear mushrooms (the narration calls them the “fungus humongous”, the characters call them “fear mushrooms”) were nicely tied in as a natural topping for Pizza Face’s scheme, but also as a handy way of keeping the other characters from taking the adventure at face value.  It ties up very neatly.

Hey, also, Shawn Lee's lettering on the fear mushroom's dialogue is great; that rainbow gradient thing.  I don't comment on lettering very often, but that was a cool effect.

All in all, even putting aside my admitted affection for Pizza Face, I think both halves of “The Flavor of Fear” combine into a solid story.  It’s goofy and weird with some wild and expressive art.  One of the better longform stories to come out of New Animated Adventures in a while.

Grade: B (as in, “But while I was a little disappointed at first that Pizza Face’s dialogue wasn’t written in Mario-isms, I think-a I can-a understand-a why that-a would get-a annoying to read-a after a few-a pages”.)