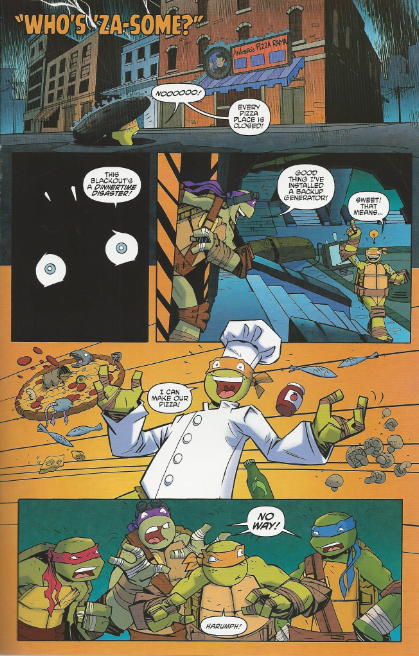 A blackout has closed all the pizzerias in New York, leaving Michelangelo to bake dinner with the lair's back-up generator.  Raphael refuses, telling Mikey his pizzas are weird and disgusting.  As April and Casey swing by, Mikey comes up with an idea: Leo, Don and Raph will each make their own pizza and April and Casey will judge if it’s better than Mikey’s cooking. 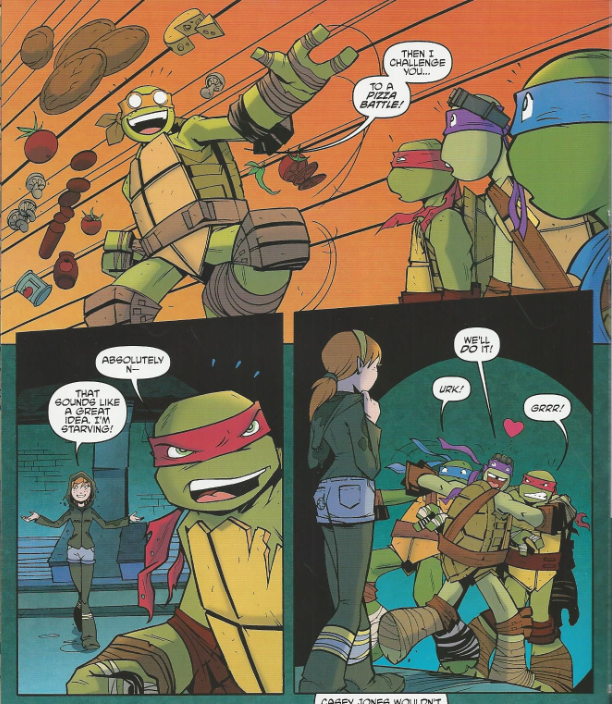 Leo figures that cooking is just like training and tries to prepare a pizza using martial arts moves.  He splatters it against a wall.

Raph comes to the conclusion that he doesn’t have to makes the best of the three pizzas, just one that’s better than Mikey’s  He succeeds at slicing and grating all the ingredients, but when it comes to gently kneading the dough, he mangles it. 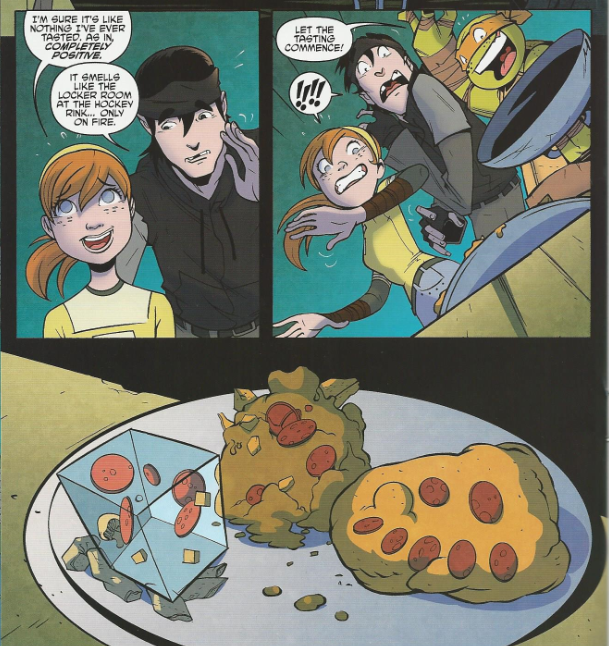 Judgment time arrives and the sight of the three grotesque abominations of pizza sends April and Casey fleeing the lair.  The Turtles admit that as bad as Mikey’s cooking is, he’s still better at it than they are.

With the blackout over, the Turtles head to Mr. Murakami’s for some pizza gyoza… with Mikey choosing the filling.

*The disgusting pizza Mikey imagines on the first page of this story is based on one of Pizzaface’s pizza disk weapons from the ‘80s TMNT toyline.  The disembodied human finger is a reference to his original toy sculpt, which would have included his severed finger as a topping but was removed by Playmates for being too gruesome.

I’ve noticed that there’s a certain pattern to back-up comedy relief strips that I find I like over others.  It’s the kind where the Turtles separate and each try to do the same thing, but of course their different personalities see them accomplish the task in totally different ways.

The template is pretty simple and only needs to be filled in by the given task, but I don’t seem to get tired of it.  Usually because it gives the writer the chance to embellish how radically different all the Turtles are from one another and the humorous effect tends to work.

In this case, Goellner comes up with a pretty no-brainer that I don’t think anyone has ever done before: Each Turtle trying to make their own pizza and how that turns out.  Has it been done before?  I can’t remember and Jesus Christ, I’ve read a lot of Turtle comics.

While the story isn’t exactly a knee-slapper, it’s certainly fun and very lively (thanks to Ferreira’s art). Raph tended to get the best lines as he critiques Mikey’s questionable cooking prowess.

It’s a good back-up and a nice thematic complement to the A-story about Pizza Face.

Grade: B (as in, “But despite all the gross pizza shenanigans going on in this issue, it still hasn’t made me love the dish any less”.)