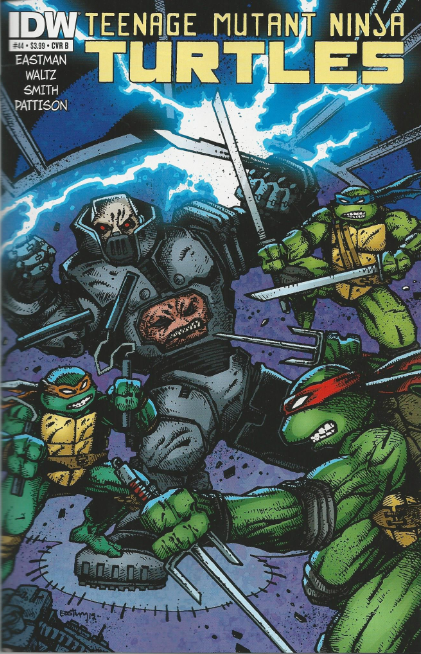 On Burnow Island, the Turtles smash their way through the hordes of Flyborgs and mini-Mousers to get to General Krang (who is lost in thought, reminiscing about his father).  Stockman orders his Flyborgs to fly him to safety and retreats. 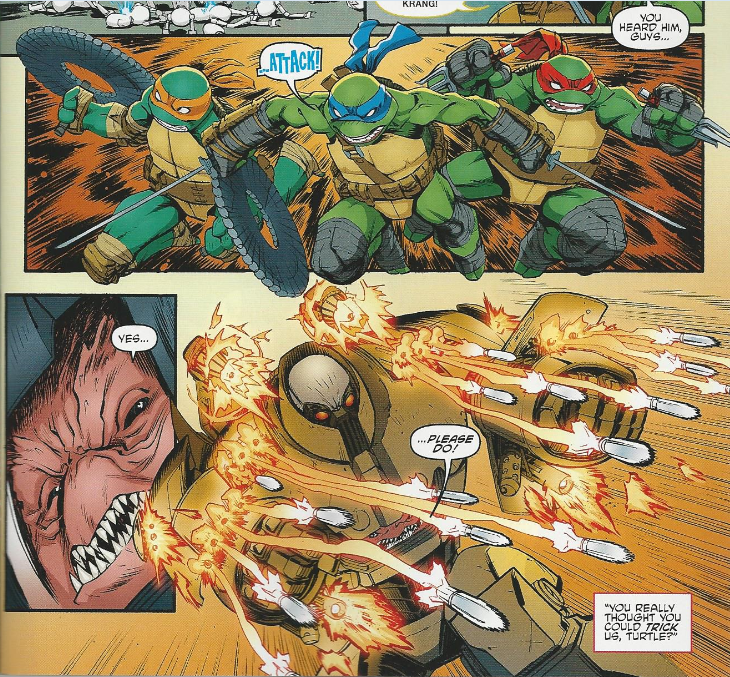 At Harold’s lab, Bebop and Rocksteady have begun trashing Donatello.  Harold tries to delay the Foot mutants with Metalhead and give Donnie a chance to escape, but they make short work of the robot.  They beat Donnie to a pulp and while Bebop holds him down, Rocksteady smashes his shell to pieces with his sledgehammer.  They then receive a call from Karai to return to Foot HQ to deal with the Mutanimal attack and the two leave. 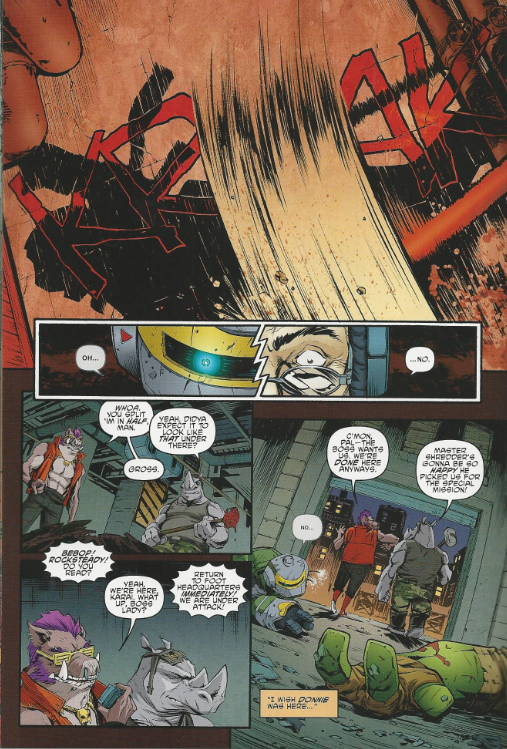 Back at Burnow Island, the Turtles keep Krang busy while the Fugitoid tries to reroute the power from the Technodrome.  It has already begun terraforming Burnow Island and if it reaches maximum power it will begin eliminating all life on Earth.

At Foot HQ, Karai and her Foot Soldiers prepare to strike down Splinter.  Nobody and Alopex arrive, having been told by Raph to keep an eye on Splinter since he didn’t trust Hob, and they dispatch the Foot Soldiers.  Splinter tells Karai that his feud was always with Oroku Saki and never the Foot Clan.  As a former member of the Foot, he believes in what the Clan represents, but despises what Saki turned it into.  However, he says he doesn’t see that same sort of evil within Karai and hopes that she can restore the Clan’s honor.  Conflicted, Karai chooses to drop a smoke bomb and retreat.  Nobody then receives a call from Harold, telling her to get back to the lab as fast as possible.

On the beaches of Burnow Island, the Shredder has been beaten into the ground by Tragg and Granitor.  Bludgeon and Koya try to keep on the offensive, but the Technodrome’s terraforming begins to asphyxiate everyone on the beach; Foot Soldiers as well as Krang’s army.  Thinking their master dead, Bludgeon and Koya retreat.  Likewise, Tragg and Granitor escape back to the Technodrome, which has maintained an Earth atmosphere for the human technicians working within it.  Everyone else dies. 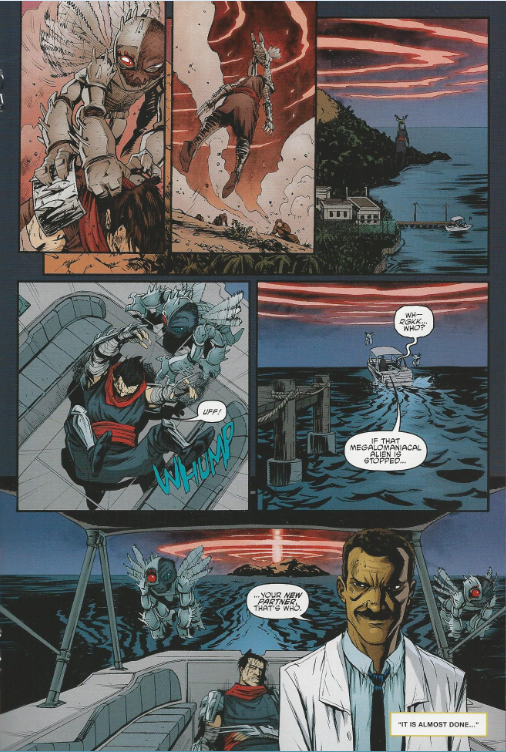 A lone Flyborg then buzzes onto the beach, snatches up the battered body of the Shredder and carries it to a boat.  Shredder weakly asks who is rescuing him and Stockman tells him it’s his “new partner” (assuming Krang is defeated).

Back inside the Technodrome command center, the Turtles have succeeded in disabling Krang’s robot body and seriously injure the Utrom within.  The Fugitoid successfully reroutes the power and shuts down the Technodrome.  The Turtles want to kill Krang, but the Fugitoid tells them they don’t have the time; as the terraformed atmosphere outside will soon leak into the Technodrome and asphyxiate them.  He promises to deal with Krang and teleports them back to Harold’s lab. 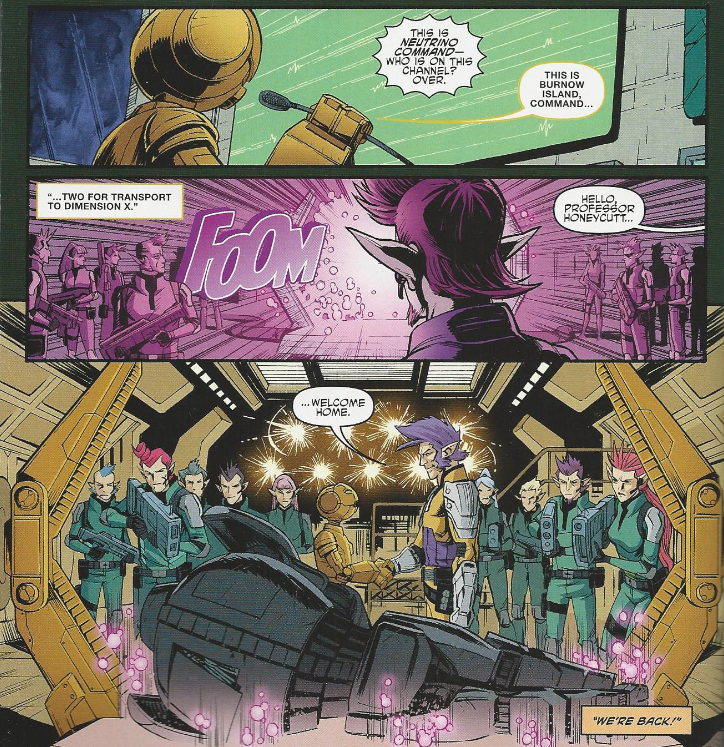 Krang curses the Fugitoid for dooming his people, but the Fugitoid disagrees.  With the atmosphere of Burnow Island now matching Utrominon’s, the Utroms can live in peace on the island forever.  However, Krang will have to pay for the lives of those he’s murdered; both the humans killed on Burnow Island and the countless scores of others from across the universe.  The Fugitoid then teleports himself and Krang to Neutrino Command in Dimension X, where Zak and an army of Neutrinos await to welcome him and take Krang into custody. 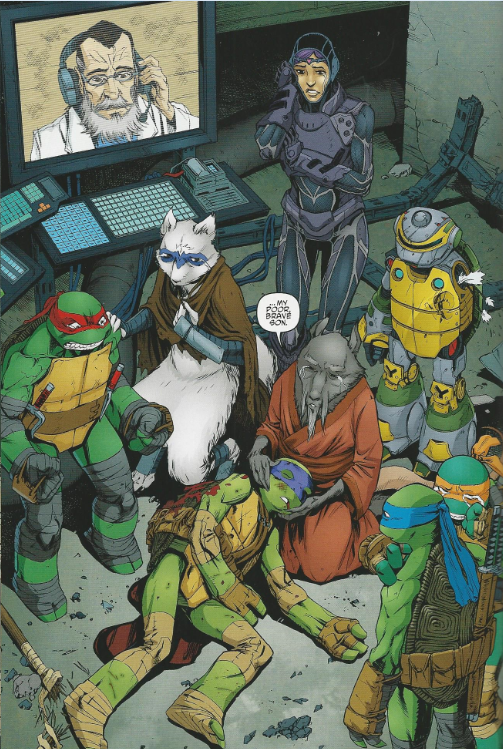 Back at Harold’s lab, the Turtles return home victorious.  Their celebration is cut short when Splinter, Nobody, Alopex and Harold show them the tragic sight of Donatello in a pool of blood, giving no signs of life.

I am going to gush about this issue.  But there’s something serious, a problem with IDW, that I want to discuss, too.  And it has nothing to do with their storytelling.  I couldn’t decide if I should address it at the start of this review or the end.  After writing a big long opening shpeal, I deleted it and decided to save it for the end, because I don’t want to start off my thoughts on such an awesome comic with rampaging negativity.

So with that out of the way…

General Krang has been a major driving force behind this comic’s conflicts since the first issue.  And now he’s out of the picture.  It feels like a real turning point; after 44 issues of Krang as one of the focal antagonists, he’s gone and we can move onto something else.  I’ll miss him, but I don’t feel like I was shortchanged on his arc, either.  His storyline went out with a BANG and I’m left wanting for nothing.

Okay, maybe there was a bit of villain decay regarding Krang's fight with the Turtles.  All four Turtles had to fight tooth and nail in TMNT #20 just to get him into a draw, but here only three of them manage to take him down while also contending with a horde of Flyborgs and Mousers.  Perhaps Krang was sapped after battling the Shredder, or maybe he was just too distracted because of the Technodrome.  Or maybe the Turtles had improved their skills enough over the past twenty-four issues that Krang wasn’t as much of a challenge as he was the first time they fought him.

Or maybe since we’d already gotten a long drag-out brawl between the Turtles and Krang, Waltz and the rest didn’t want to retread that ground for our benefit.  All are acceptable reasons and I was satisfied with the fight we got (and the image of the humbled Krang’s crumbled body being dragged before the Neutrinos to face justice).

Waltz, Eastman and Curnow also set the stage for what’s supposed to be the big “leading up to issue #50” arc.  I don’t want to call it a “finale” since the book isn’t getting cancelled (it might get relaunched with a new #1, though).  Rather, with Krang eliminated, the upcoming “Vengeance” arc is supposed to be the epic confrontation with the Shredder and the Foot Clan that the book has also been building toward since issue #1.  Curnow and Waltz have said that they originally plotted the series out to fifty issues, so while #50 isn’t the “end”, it’s the culmination of the editorial team’s initial vision.  While it does sort of feel like the book is knocking down its pins one at a time to get us to something of a fresh starting point, it’s also hugely satisfying to get something amounting to closure in this title, which has been all about slow-burn build-up since day one.

Then there’s Donnie.  This is what I alluded to at the start of my review.  As a storytelling beat, it fit perfectly with the rock-and-hard-place Donnie had been putting himself in over the past issues.  It was appropriate.  But was it shocking?  That’s where I have to get something off my chest...

IDW released preview pages of their Free Comic Book Day special in January.  Free Comic Book Day is in May.  MAY.  The preview completely spoiled Donnie’s fate from this issue.  They utterly derailed their own storytelling momentum just to promote a free comic that wouldn’t be coming out for another five months.

Thanks to IDW’s zeal to pimp the vital plot points of their comics half a year in advance, I had this hugely important moment completely wrecked for me.  And I try to avoid any thread or news site post that says “Preview” in it.  But all it takes is one person offhandedly mentioning it in a thread about a different topic, or someone posting a scan of the preview pages and that’s it.  Five months is a long time to try and hide from spoilers.  Sooner or later, someone is going to accidentally wreck it for you.  But we wouldn’t have to worry about that if IDW would just stop sabotaging their dramatic milestones with previews they release half a year early (they did this same shit with Dark Leo).

It’s like, imagine you’re sitting in a theater to see a movie you’re really, really excited about.  Then, they play the trailer for the movie’s sequel coming out next year and that trailer completely ruins the end of the movie you’re about to see.  What the FUCK?  Why would they DO that?  That would be awful!  But that’s essentially what IDW does.  While you’re waiting to pick up the conclusion to their current story arc, they’re already showing you pages of issues 5 months from now that completely ruin the end of the issue you’re about to buy.

So yeah, not only did IDW tell me this was going to happen to Donnie back in January, they told me everything that would happen next through May.  So as a result, I couldn’t appreciate any of the “oomph” that big cliffhanger splash page was supposed to have.

I bet it would have been awesome, though.

Grade: A (as in, “And I guess all the people complaining that IDW’s Bebop and Rocksteady were too comedic can breathe a satisfied sigh of relief.  They went full ‘Death in the Family’ in this issue”.)

As clarified by editor Bobby Curnow, although IDW did provide the FCBD pages to Diamond, it was under the stipulation that they NOT spoil the ending of this issue.  Diamond went ahead and did it anyway.  So Diamond is to blame, I guess.