The Mutanimals are Making a Comeback and What Took so Long? 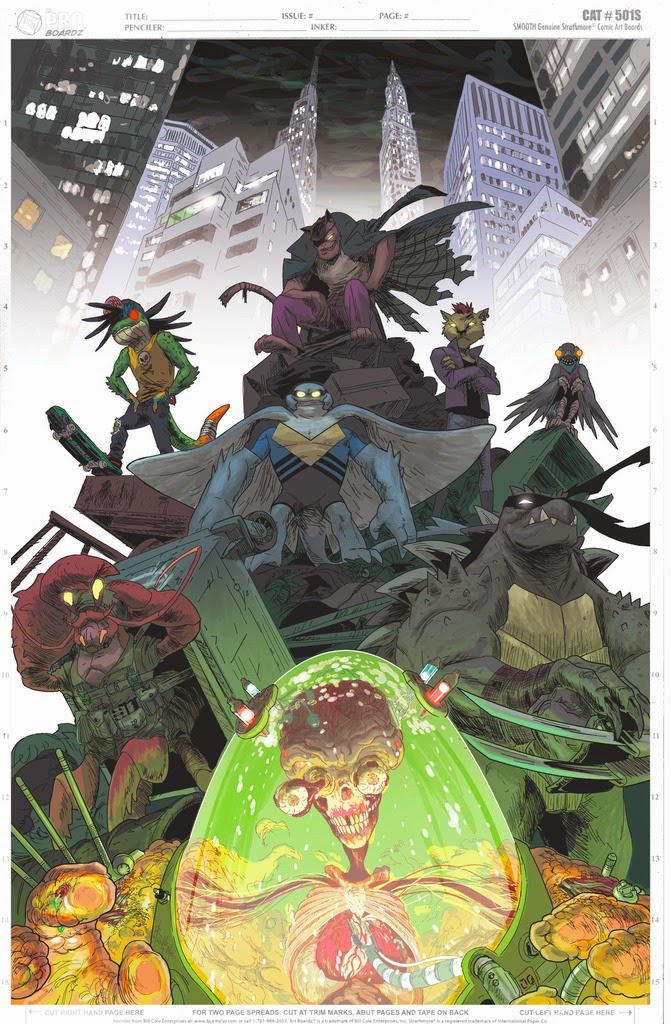 As you may have noticed, the Mighty Mutanimals are making a comeback across the various Teenage Mutant Ninja Turtles mediums.

IDW’s TMNT comic has been building them up for a few years now, with Old Hob finally realizing his dream of a mutant gang in TMNT #38.  The Mutanimals quickly received their own 4-issue miniseries a few months later. 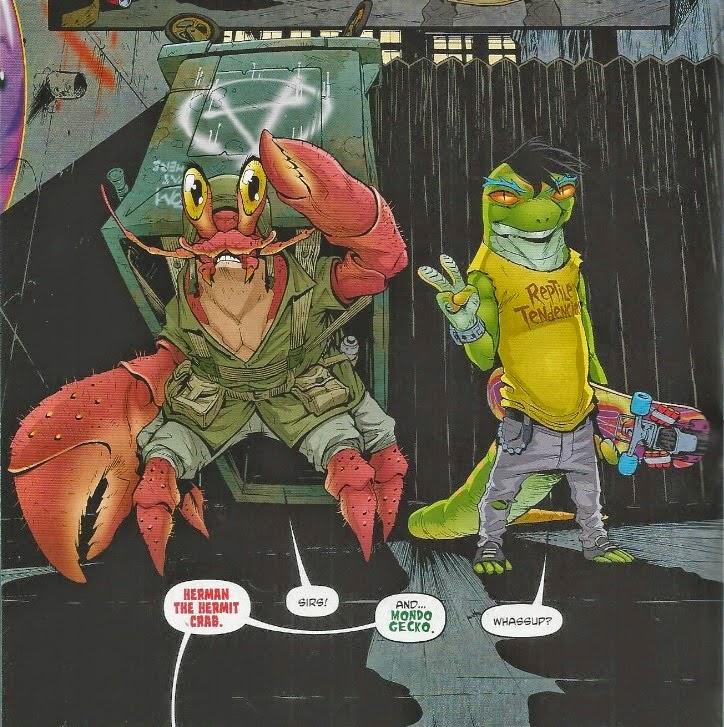 And right around the same time, the Mighty Mutanimals made their debut in Nickelodeon’s TMNT cartoon.  The mid-season 3 episode “Battle for New York” brought them to animated life for the first time. 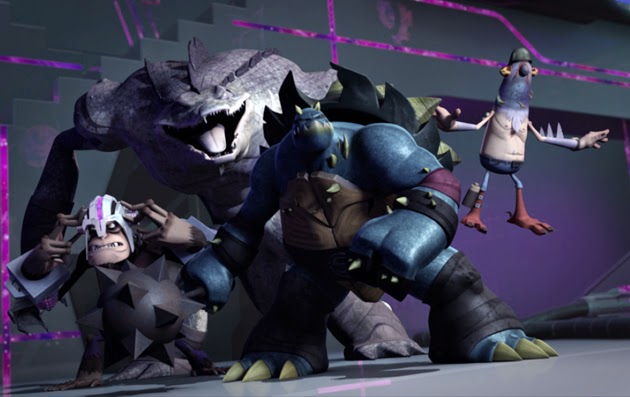 Yessir, we are currently in the midst of a Mighty Mutanimals Renaissance.  But what the FUCK took so long?

For some background, the Mighty Mutanimals were the brainchild of Ryan Brown and Steve Murphy (under the pseudonym “Dean Clarrain”) and were created alongside artists Ken Mitchroney and Garrett Ho.  Premiering with their own miniseries in 1991, a spin-off of Archie’s TMNT Adventures, the Mighty Mutanimals served a pretty inspired purpose.  They gave all those secondary characters introduced throughout TMNT Adventures a chance to be more than hi-then-bye guest stars. 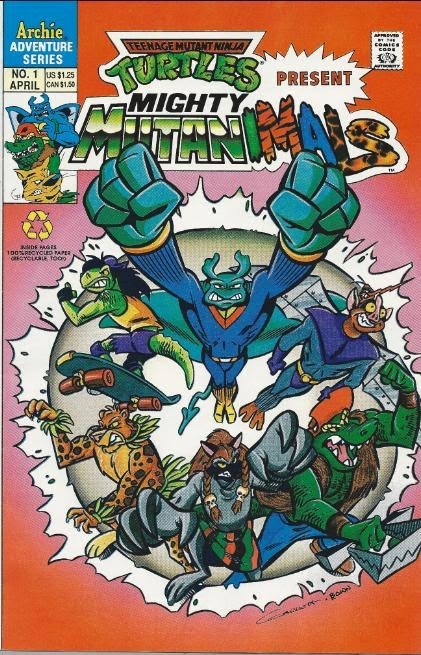 The original line-up consisted of Man-Ray/Ray Fillet (ostensibly the team leader), Leatherhead, Wingnut, Screwloose, Mondo Gecko, Dreadmon and Jagwar.  All but two of those characters also had action figures in the Playmates TMNT toyline and appeared in some form or another in the TMNT cartoon produced by Fred Wolf (Man Ray kinda-sorta as “Ray” but that’s another kettle of fish).

From there they spun off into their own ongoing series that lasted a brisk 9 issues, but also crossed over with the TMNT Adventures ongoing on occasion.  After that, they played a major role through the Merdude miniseries before receiving a back-up serial in TMNT Adventures… that ultimately killed them off.

The team died in 1994 and the Mighty Mutanimals would not be heard from again for twenty years.

Their initial failure probably had something to do with execution over concept.  Steve Murphy’s writing prioritized educational content over entertainment and the Mighty Mutanimals comic was often a patronizing bore.  Playmates also didn’t see the value in the brand as a larger spin-off franchise due to the characters already existing as merchandise under the TMNT banner.

So if you go back and read those original Mighty Mutanimals comics, you may not see what the big deal is.  It’s a team consisting almost entirely of action figure cast offs who literally, LITERALLY, dedicate themselves to saving the whales.


There are pockets of awesomeness scattered throughout the run (and excellent artwork from the likes of Mitchroney, Ho and Mike Kazaleh), but the stories reek of the Captain Planet era and one might not be shocked to find that the Mighty Mutanimals thrived for a smidgen less than three years.

Be that as it may, it wasn’t so much the source material that I think folks found enticing about the Mutanimals, but the concept and their potential.  Basically, if you already owned a bunch of action figures of TMNT supporting characters, now you actually owned a unified TEAM of characters who had their own adventures and their own villains!  It was like you suddenly had a completely new set of toys, free of charge.  That Wingnut figure gathering dust in the back of your closet was suddenly an indispensable component in your Mutanimals roster.

And when I talk about kids with toys, I’m also talking about creators with pencils, because they’re basically in the same situation.  The kids now have new avenues to send their imaginations down as they play with their toys and those writing the characters for comics or whatever suddenly have the same avenues opened up to them.  These oneshot guest personalities have become part of an ensemble cast and they can all be developed in conjunction with one another.  Leatherhead and Man Ray may have been smalltimers on the carpet or on the page, but when seen as part of a bigger outfit of colorful characters they immediately became more important and more fun.

It’s not like it’s a new idea or anything.  In fact, I look at it like this: The TMNT are the Fantastic Four and the Mighty Mutanimals are the Avengers.


The Fantastic Four and the TMNT are at the core of their universe and both have a static roster (let’s just forget about those weird fill-ins the FF occasionally resorted to).  As they should, since they’re a tight-knit family and the way they play off one another is as much a selling point for the team as the adventures they go on.

The Avengers and the Mighty Mutanimals, on the other hand, are assembled from preexisting characters who may not have turned many heads as solo acts, and their roster is fairly fluid.  The Avengers were designed from the start to lose and gain new members whenever the lineup started to get stale.  The Mighty Mutanimals, meanwhile, have never had identical rosters across any incarnation.

And that’s one of the things I love about them.  ANY Ninja Turtles side character has the potential to be a Mighty Mutanimal (well, except the humans, I guess).  If you’re an 8 year-old in 1992 and you don’t have the Mondo Gecko toy?  Well Ace Duck can fill in just fine.  And if you’re a writer for Nickelodeon and Man Ray hasn’t been introduced in your cartoon yet?  Then Pigeon Pete will do in a pinch.


Looking at the line-ups of the Nickelodeon and IDW Mutanimals so far (they’re certain to expand) alongside the original Archie line-up and the unproduced cartoon line-up, I don’t think there is any one character who is a constant among them.  Maybe if IDW ever gets around to introducing Leatherhead, and hooks him up with the Mutanimals, we might finally get our Mutanimal keystone.

And along with the unstable rosters comes an unstable goal for the Mutanimals; no two incarnations have served the same purpose as a team.

The Archie Mutanimals were a group of eco-terrorists who bullied legal waling operations and only incidentally saved the world from Biblical Armageddon… but strictly as a consequence of fighting against pollution and ozone layer depletion.

The Mutanimals from the cartoon series (that never got made) featured the same line-up as the Archie comic version but with the addition of Ninjara (who was never a member in the Archie books).  They would have been more along the lines of a traditional superhero group with their own secret island headquarters, high-tech vehicles and super villain antagonists.  The comic was moving in that direction, too, but got axed before it could get there.

The IDW Mutanimals were assembled by Old Hob and include Slash, Pigeon Pete, Herman the Hermit Crab, Mondo Gecko, Mutagen Man, and though we aren’t quite there in the miniseries yet, Ray Fillet and someone named Sally will be joining.  In this version they’re a street gang with designs on expanding into a military force devoted to making the world a safer place for the ever-growing mutant animal population (with violence if necessary). 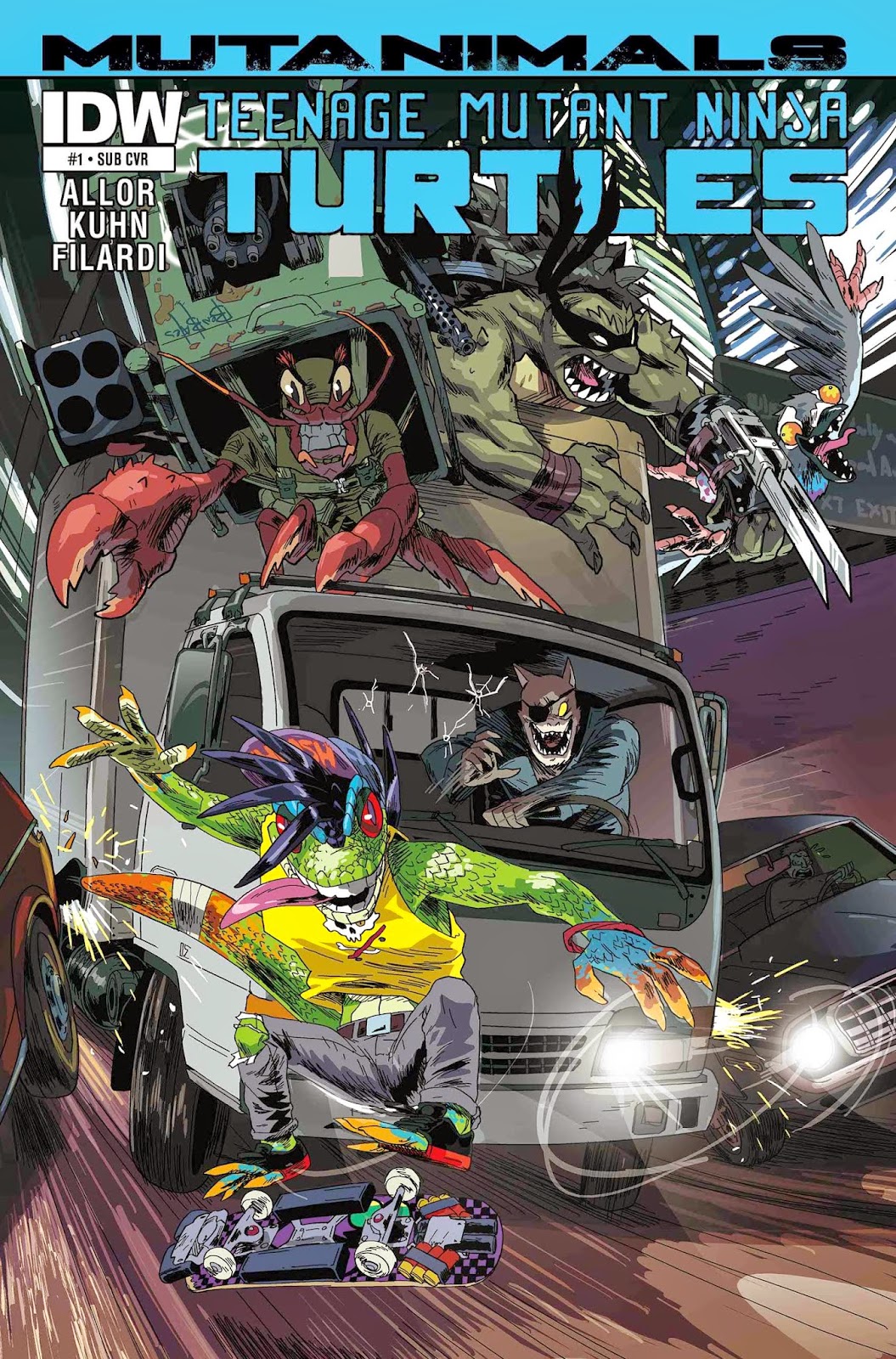 Lastly, the Nickelodeon Mutanimals were assembled by Slash and include Pigeon Pete, Leatherhead and Dr. Rockwell/Monkey Brains.  These guys act as a group of freedom fighters, defending New York City from the Kraang who were invading through Dimension X portals.  They’re ultimately a heroic group without the shades of grey present in the IDW version, or the out-and-out eco-terrorism of the Archie version. 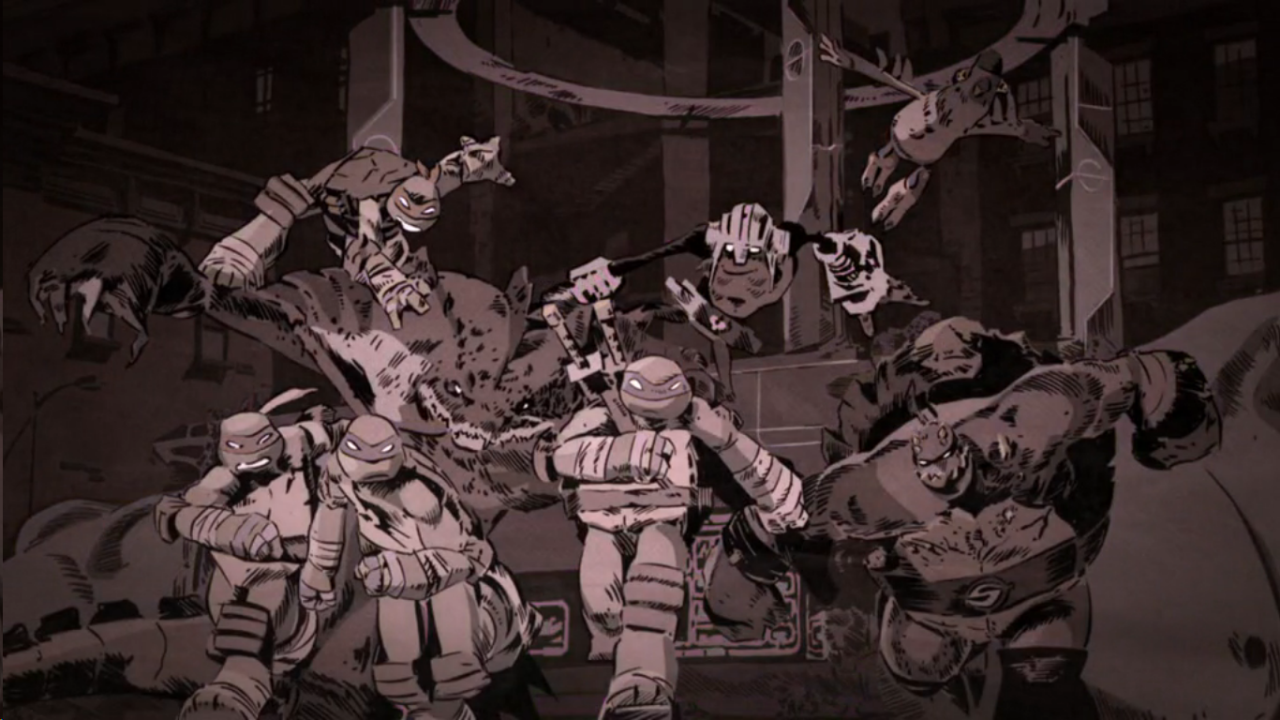 So as you can see, the Mutanimals are pretty much whatever the writers want them to be.  All that really unites them is that they’re a team allied with the Turtles who populate their ranks with guest characters.  It’s an extremely versatile concept.

So why did it take so long for them to make a comeback?

Well, there’s always the reality that they were pretty obscure from the start, but I think it has more to do with the post-Fred Wolf, pre-Nickelodeon era of TMNT deliberately avoiding any non-Mirage concepts.

After Kevin Eastman’s disastrous blunder, Ninja Turtles: The Next Mutation, Peter Laird took a firmer grip on the creative control of the franchise between 2000 and 2009.  The only comics coming out were the ones written or edited by Peter Laird and his Mirage staff, and the only cartoons/movies coming out were those overseen and approved by Peter Laird.  Aside from a few nostalgic homages or Easter eggs, the 2000s were all about distancing themselves from the Fred Wolf and Archie incarnations of the brand and the Mighty Mutanimals were a part of that.

Was it a bad time for the TMNT?  Oh Christ, absolutely not!  The 4Kids TMNT cartoon, at least for its first four seasons, was freakin’ great!  The Mirage comics were a mixed bag, but some of their all-time best output came during that decade.  The Imagi movie kinda sucked, but it was hardly the worst TMNT film we’ve ever gotten.  And the toys from Playmates were as good as anything they’ve put out before or since (the TMNT toyline has been remarkably consistent for the past twenty-eight years).

But it was also an era that the Mighty Mutanimals had no place in.  The 4Kids cartoon, it’s accompanying toyline and the Mirage comics were all mostly devoid of guest mutant characters, so even if the concept of a team composed of mutant one-shots had wormed its way into the series, there weren’t enough mutant one-shots to populate such a roster.

Times have changed, though.  The “Turtles Forever” movie was sort of Laird’s or Mirage’s or Playmates’ way of saying “It’s okay to mention the Fred Wolf and Archie TMNT again” and those floodgates have opened wide.  The IDW comic and the Nickelodeon cartoon have both been a fun mish-mash of Mirage, Fred Wolf, Archie and even 4Kids ideas, so it’s a small wonder the Mighty Mutanimals have found new life in both mediums.

But why didn’t they show up in the first year of the comics?  Or in the first season of the cartoon?  Well, practically speaking, to have a team assembled entirely from one-shot characters requires those characters to have been introduced in one-shot appearances one at a time.  And that takes a while.

I mean, they could have always brought in the Mutanimals wholesale as a preassembled team and introduced us all to the characters that way, but I think it would have done a disservice to the idea.  When Marvel Studios finally made their Avengers movie, it was AFTER they introduced all the characters in their own films; because they knew part of the appeal of the Avengers was in seeing all these characters you recognize coming together.  Likewise, part of the appeal of the Mutanimals is seeing them come together and swell their ranks as time goes on.

Will the Mutanimals ever go away for twenty years again?  I’d like to think they won’t.

While Playmates originally balked at the idea of the Mutanimals, I believe it wasn’t so much the concept of the team but the risk and expense of giving them their own franchise.  But under the TMNT banner, they function well both as an additional selling point for existing toys and as a creative opportunity for writers.  When the brand reincarnates itself after however many years it takes for the current iteration to lose steam, I think we’ll see the Mutanimals again.  It’s an intuitive idea and it’s very, very fun. 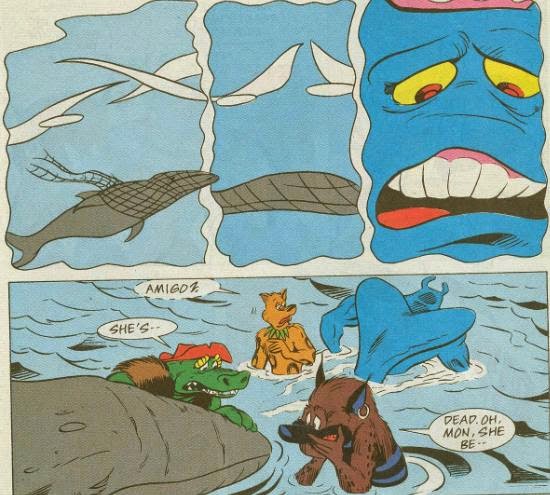