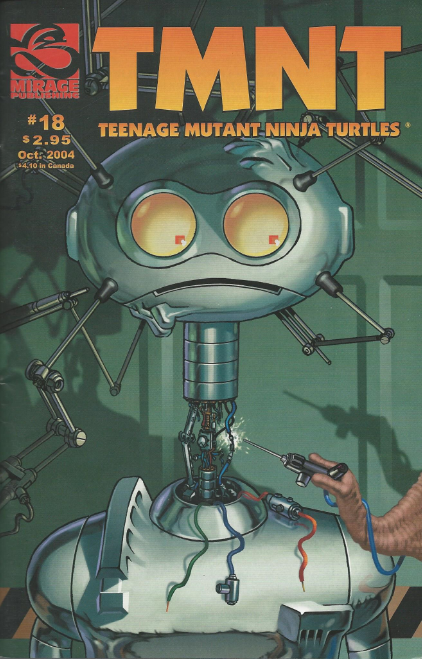 On the Moon-Island, Glurin repairs the Fugitoid and gets him up to date on everything that happened since Raphael mutated and escaped.  He informs the Fugitoid that Raptarr is being treated for his injuries and will recover, but Raphael has gone missing; possibly returning to the Turtles’ hidden lair.  Being the only one who knows the secret location, the Fugitoid must go there alone to check.  Poor Professor Honeycutt wishes he could track down Leonardo to join him. 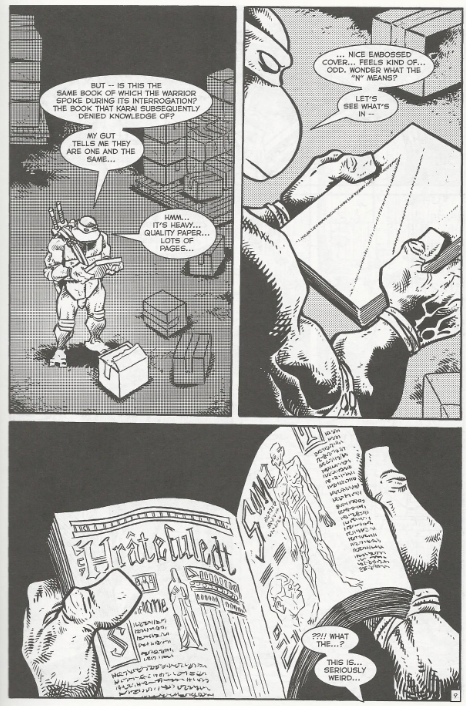 At a Foot warehouse, Leonardo tells the two Foot Soldiers on guard duty that they’re relieved under Karai’s orders.  They’re hesitant to believe him, but would rather not disturb Karai in the middle of the night to find out (they're also pretty fed up with the Foot, considering how many of them have been killed lately).  Once they’ve left, Leo checks on the book they’ve been publishing that Three Moon Jaguar was so desperate to stop.  It appears to be an arcane spell book with a big “N” on the cover. 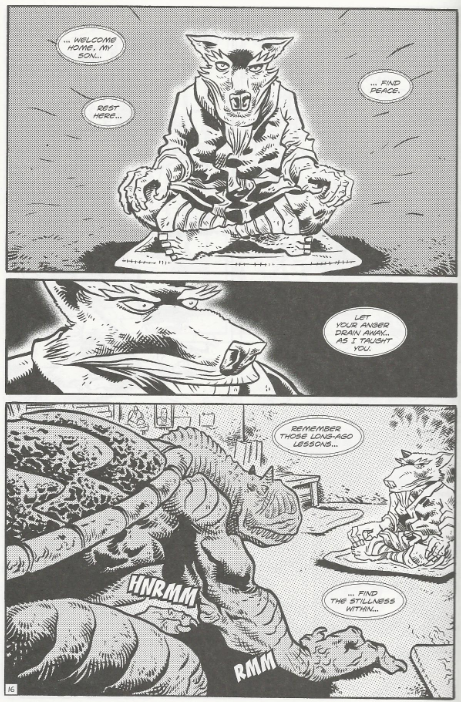 Down in the sewer lair, the mutated Raphael has torn his way in and feels drawn to Splinter’s old room.  There, he sees a vision or a memory of his master, giving him a lecture about controlling his anger.  Raph begins to mellow out when suddenly he’s startled by the sound of the answering machine.  It’s Casey, saying that April has been missing for four days and he’s worried sick.  As the message ends, Raph growls Casey’s name. 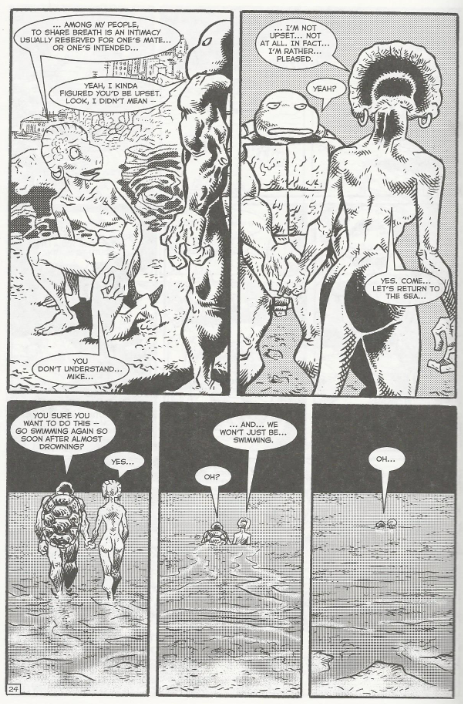 Off the coast of Maine, Michelangelo struggles to free Regenta from the fishing net she’s tangled in.  He climbs onboard the boat and borrows a knife from the bewildered fishermen and cuts her loose.  Carrying her unconscious body back to shore, he gives her mouth to mouth and she revives.  Mikey tells her what happened, but Regenta is more concerned with the fact that they “shared breath”, which among the Styraccodons is considered part of a courtship ritual.  She then invites Mikey back into the water for another swim… and something else. 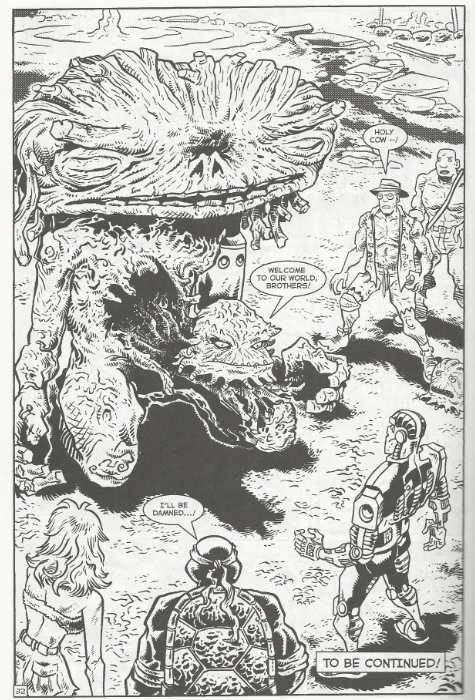 Inside the habitat at the tepui, the shrunken wood-creature slaps Donatello away and begins accosting one of the Utroms, yelling in an alien language.  Don tries to fight back, but keeps getting battered around like he’s nothing more than a nuisance.  The Utrom then tells Don to relax, that he understands the wood-creature’s language and that they’ve come to an understanding.  The wood-creature’s chest then opens up and out crawls an Utrom, albeit a more feral-looking one.

*Raph decapitated the Fugitoid and injured Raptarr in TMNT (Vol. 4) #15.

*Leonardo references their experience with the spell book “De Vermis Mysteriis” from Tales of the TMNT (Vol. 2) #30.

Hey, we’re catching up with some story elements left in limbo for about three or four issues.  So the Fugitoid and Raptarr are okay, but April never came home after her meeting with Renet.  We still aren’t going to find out what that was all about for four more issues, but at least we’ve got something to tide us over for now.

I rather liked the situation Honeycutt was placed in after the end of his segment.  Being the only one who knows the location of the TMNT’s secret lair, it's up to him to go there and check for Raph.  And Raph JUST ripped his fucking head off, so you can understand why he might not be in such a hurry.

All the other arcs are moving very slowly, though; some not even offering any new information.

Gameraph is getting a little calmer thanks to a vision of Splinter (left ambiguous so that it could be a message from beyond the grave or just a memory), regaining his faculties a little at a time.  It was a nice moment.

Leo just discovered that the book the Foot Clan’s been publishing is a grimoire with a big ole “N” on the cover.  There’s only one ancient book of horrible secrets that starts with an “N” that I can think of and it’s not “Nate the Great” (he accepted pancakes as currency, what a fuckin’ moron).

Mikey and Regenta start to get serious.  Mikey gets laid.  You know, I think Don’s the only Turtle not to get any through the course of the Mirage series.

And speaking of Don, his arc continues to canter about seven paces behind the reading comprehension of the audience.  I mean, Don’s arc really shouldn’t have been the cliffhanger segment for this issue.  The wood-creature revealing itself to be an Utrom was just a formality at this point and there was no shock or awe in that “reveal”.  It just makes all the other characters look dumb.

This was probably the most incremental issue of Volume 4 in a while.  Nothing really awful about it or anything, it just hasn’t got much going on.