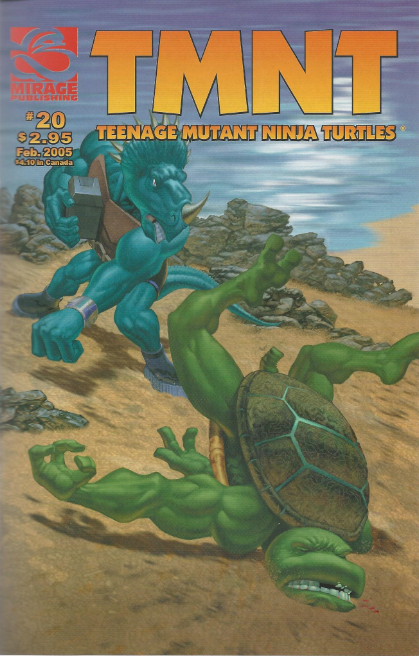 On a beach in Maine, Michelangelo and Seri build sand castles until Seri informs Mikey that it’s time to go back.  Mikey goes to a nearby shop to get a basket for their eggs, but when he returns he finds the Styracodon bodyguards forcing Seri into an anti-grav tug and collecting the eggs.  Mikey attacks them, but winds up getting shot by a stun laser and beaten until a couple teeth get knocked out.  The Styracodon guards then load his unconscious body into the tug. 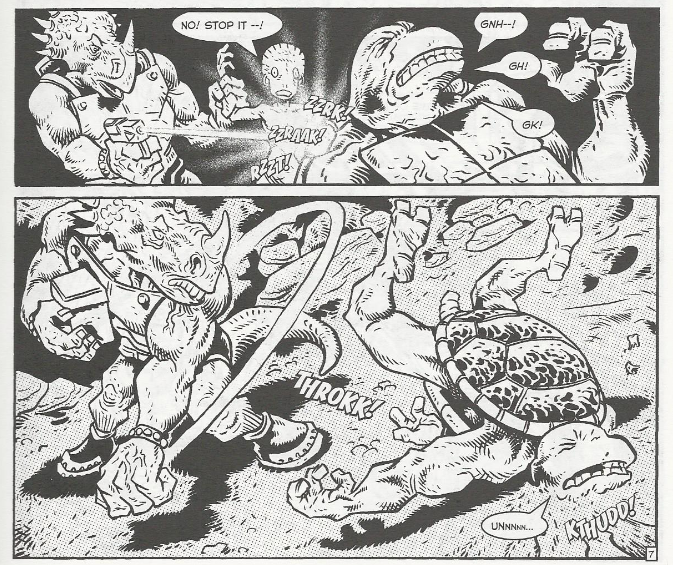 In the glass habitat in Venezuela, Donatello follows Glyminal to the Quantum Inversion Redimensioning platform and both are enlarged.  Glyminal shows him to the observation deck and Don is shocked to find that despite having just been “enlarged”, they’re still small enough to fit inside of a peach pit.  The Reptilians (raptor monsters) are out prowling for the Utroms, whose base is nestled high in the ruins of their old crashed ship.  The vibrations of the Reptilians are what’s causing all the noise in the habitat. 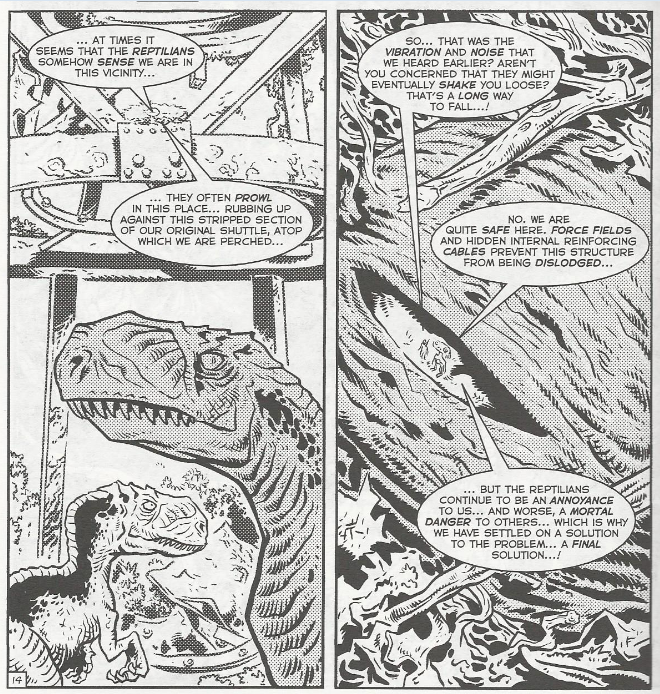 Springfield, Massachusetts.  Casey Jones prowls the rooftops in full vigilante gear, looking for trouble.  He spots a couple muggers and prepares to bash their skulls in when he sees Nobody get to them first.  Casey is surprised, since Nobody is supposed to be dead, but notices that this Nobody is a woman.  Casey leaps into action and helps the new Nobody clobber the punks, but when he tries to ask her what she’s doing in his old pal’s costume, she bolts.  Casey chases her down and pulls off her mask, revealing… April? 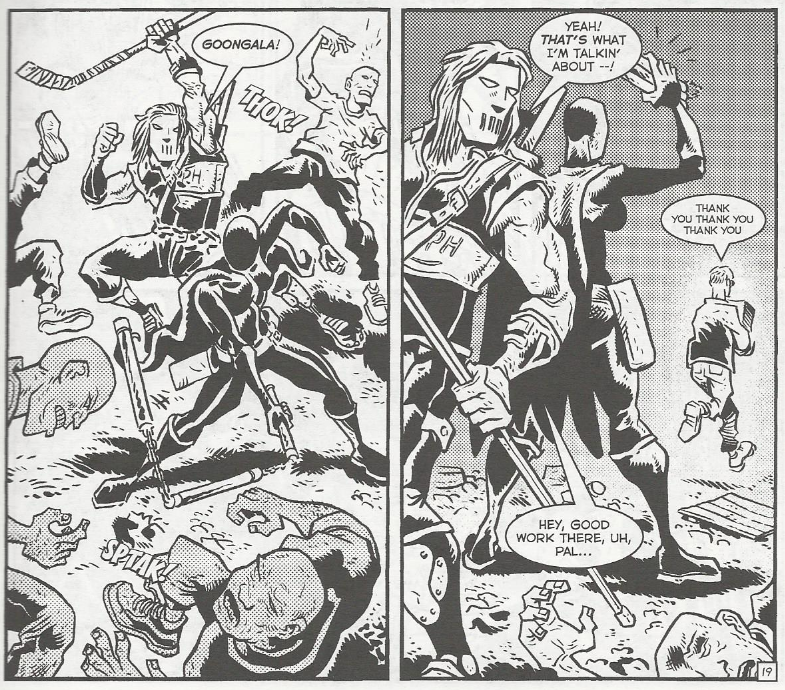 Down in the sewers, Leonardo heads toward the lair, wishing Master Splinter were still around to offer him guidance.  He hears noises coming from the direction of the lair and draws his remaining katana.  Creeping around the corner, he finds the Fugitoid and the mutated Raphael repairing the entrance.  Raph is happy to see his brother and the Fugitoid promises that once the steel door is repaired, they can tell him everything that’s happened.  Leo sheathes his blade, anticipating this story. 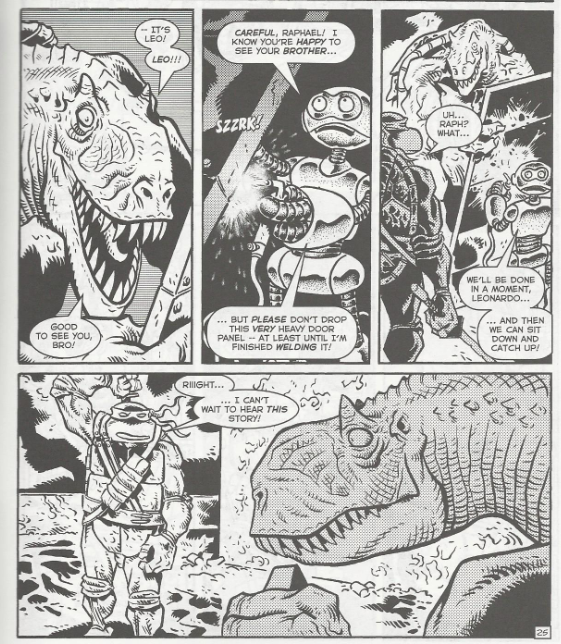 On the Utrom Moon Island, the Styracodon guards and a resigned Seri head toward the transmat platform with a large biostasis crate.  The Utrom customs officer inspects the crate and finds it filled with lobsters.  Although his scanner is giving off strange readings, he figures it’s a malfunction and lets them pass.  As the Styracodons load the crate onto the transmat platform, no one notices that Mikey is locked in a secret compartment beneath the lobsters.

Michelangelo’s arc has finally stepped out of the “mushy stuff” phase and into the “action” phase.  While I’d like to think Mikey could put up a better fight against two Styracodons, you do have to consider that he’s in his thirties, maybe a little off his guard because of his romantic distraction, and unarmed.  Excuses to justify his losing a fight he’d under most circumstances dominate, but it sets him up for a pretty exciting adventure, so the ends justify the means.

I think I said before that Mike’s and Leo’s arcs were the most entertaining parts of Volume 4, and if you were getting bored with Mikey courting Seri, we’re into the payoff, now.

Don’s arc is still molasses.  7 pages just to tell us that he’s still small and hiding in a peach pit.  A chunk of those 7 pages are devoted to some rather unnecessary decompression; a page that’s nothing but a silent 4-panel zoom-out from the peach pit, and a 2-page spread of the Reptilians prowling below.

The rest is just a lot of prattle as Glyminal takes FOREVER to explain some very simple concepts (they’re small and the Reptilians are searching for them).

Casey’s back in action, even if it’s a small moment (could’ve used some of that space given to Don’s rambling).  April as the new Nobody is another one of those ideas very flippantly introduced in Volume 4 and then never followed up on.  We’ll learn why she took on that very specific identity in a few issues (it’s melodramatic as hell), but she doesn’t continue with the masquerade after this, so it rubs off as a little pointless.

I wouldn’t have minded seeing April take on the Nobody mantle, anything to keep her relevant instead of wallpaper, but if you're gonna introduce an idea then you should go somewhere with it.  A Tales of the TMNT Volume 2 issue will come along later to ensure that she can never continue as Nobody, too, REALLY sealing the fate of this meaningless fake-out.

Lastly, Leo meets Gameraph; not much to say about this month’s Leo segment.  I mean, it IS nice to see at least two of the Turtles back together, though they’ll separate again pretty quickly.

Leo’s arc will continue to be the most intriguing along with Mikey’s, though we’re still in the “detective work” phase and it’ll still be a few more issues before… wait, never mind.  His arc NEVER gets out of the “detective work” phase, now that I think about it.  It’ll get more exciting and action-oriented in a few more issues, but we won’t be any closer to having answers, even 12 issues later.