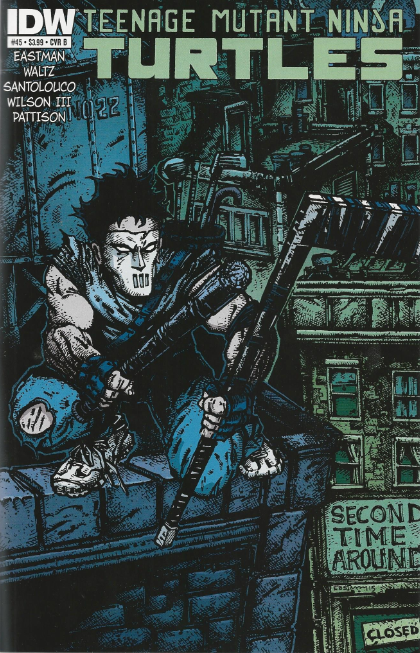 Donatello awakens in some sort of spiritual limbo where he is greeted by Tang Shen. 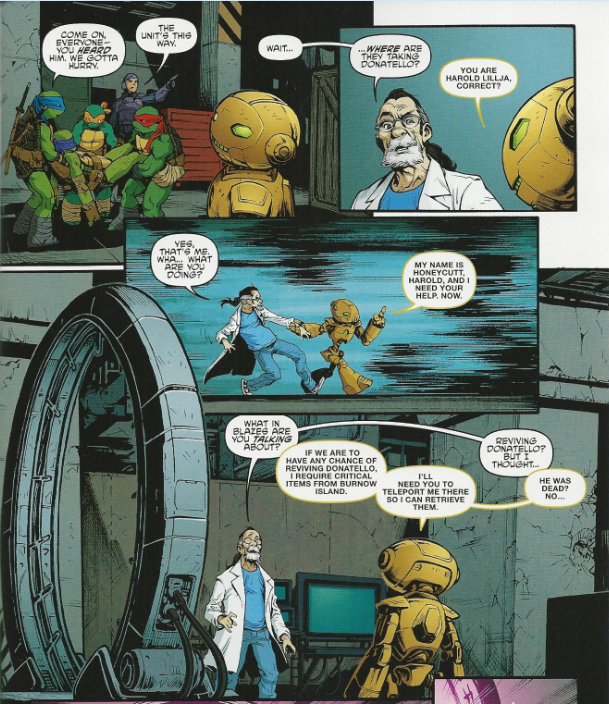 In Harold’s lab, the Fugitoid arrives from Neutrino through the portal only to see Don’s lifeless body.  He runs a scan and finds that Donnie is still clinging to life, but barely.  He tells the other Turtles, Nobody and Alopex to get Donnie’s body to the freezer/server room in order to slow down his metabolism.  He then tells Harold to activate the portal and send him to Burnow Island so he can fetch some equipment.  Splinter, hearing that his son is still alive, begins to meditate.

Splinter’s astral form arrives in limbo, which takes the form of a massive hedge maze.  He begins to navigate the maze, determined to bring his son’s spirit back.

At Foot HQ, Karai, Bebop and Rocksteady survey the damage, trying to find Hun (not sure if he’s dead or a deserter).  Koya and Bludgeon then arrive with the news about the battle at Burnow Island and that the Shredder is no more.  Karai takes charge, saying that she’ll let Kitsune determine whether her grandfather is truly dead or not.  In the meantime, she intends to cull the ranks of the Foot Clan of all outsiders and cowards, hoping to rebuild it even stronger in the Shredder’s absence.

At a grocery store in New York, a trio of Purple Dragons are shaking down the owner.  Casey arrives and beats the snot out of them, sending them away.  The owner, Arune, thanks him and Casey gives him a cricket bat in case they come back.  Arune then warns him that their leader, a big guy, was hanging around, too.  Casey realizes that must be Hun, whom he spots storming into the Second Time Around shop. 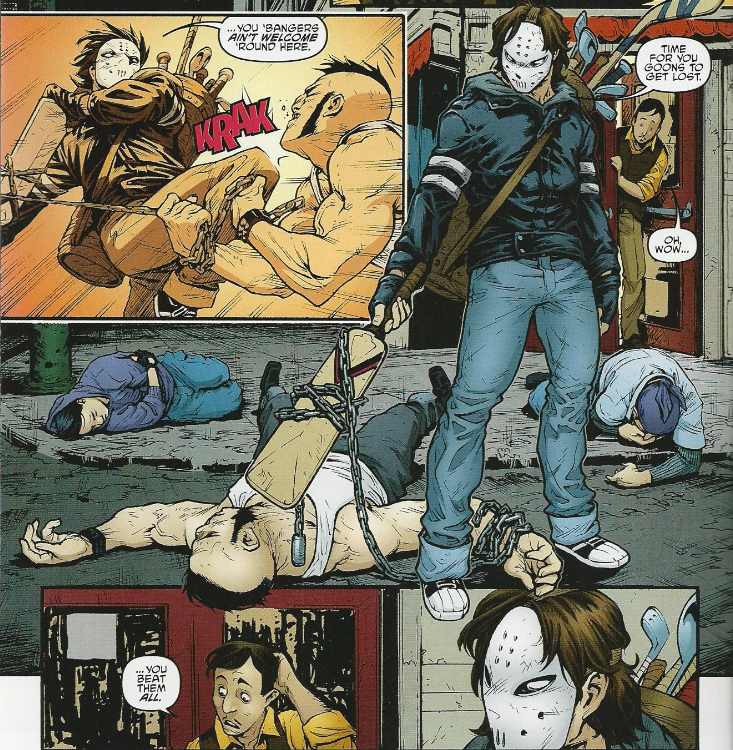 In limbo, Donatello is confused as to where he is.  Tang Shen asks her son where he wishes to go.

Back in the lab, the Fugitoid and Harold begin hooking Donnie up to a bunch of weird medical equipment.  After securing a helmet to Don’s head, the Fugitoid then activates the machine.

Outside the freezer, Raph throws a fit, insisting that they should have dealt with the Shredder first like Splinter wanted; if they had, Donnie would be OK.  Michelangelo tells Raph to shut up; that by focusing on Krang, they saved the world and Donnie would be happy with what they accomplished.  Raph storms out and Alopex follows him, hoping to calm him down.  Leonardo says that Raph was right in that the Shredder needs to be dealt with.

At Baxter Stockman’s apartment, the Shredder wakes up and attacks his savior.  Stockman keeps him at bay with his Flyborgs and offers him a deal.  He’ll combine his genius with the Shredder’s wealth and resources, but only as equal partners.  The Shredder agrees to consider the proposition, but on the condition that their first project is to eradicate Splinter and his family.

In limbo, Tang Shen gives Donnie a ponderous speech about light and dark, how the two balance each other out and which direction Donnie wants to go in.  She vanishes as Splinter arrives and the rat guides his son back to Earth. 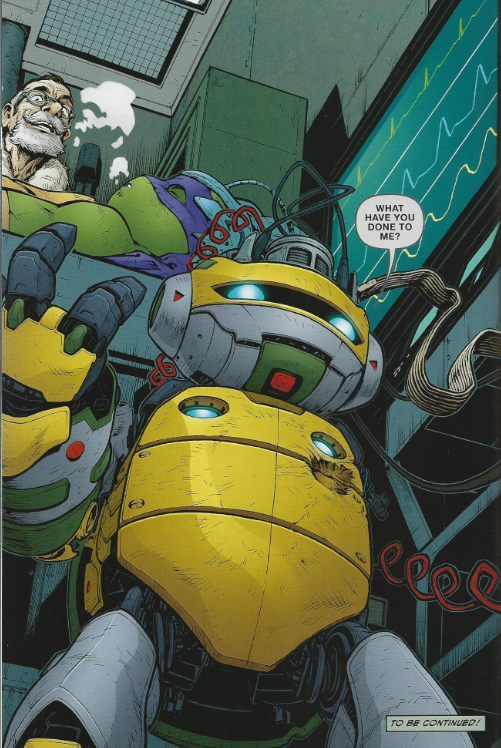 Donatello awakens in the lab, only to discover to his horror that his mind is in the body of Metalhead.

Been a crazy month.  Even news outlets picked up the story about Donatello’s “death”.  I guess there wasn’t enough real news going on in the world over the past 30 days.

Of course, if they were any measure of journalists, they’d have read the Free Comic Book Day special that Diamond published half a year ago which revealed, surprise surprise, Donnie ain’t dead.  But I bitched about that enough last review.

Anyway, I hope you speculators sold those armfuls of TMNT #44 you bought up, because it’s too late to jack up the price, now.

But, I mean, yeah.  Did anybody REALLY think Donnie was going to die?  C’mon.  My irritation at the Free Comic Book Day leak was more a matter of principle; IDW should do a better job of maintaining the integrity of its storylines or at least be more judicious about what preview material they share with Diamond half a year ahead of time.

So yeah, Donnie’s gonna be okay.  He’s Metalhead now, but he’ll be okay.  It’s an interesting turn of events, maybe a little reminiscent of the Image TMNT Volume 3 series, where Don cheated death by getting turned into a cyborg.  Waltz and the rest work it into the tapestry of the series nicely; I presume that’s menta-wave helmet technology that put Don’s consciousness into the robot body.  Like everything else in IDW’s TMNT series, the pieces all fit together very snugly.

Tang Shen appearing to Don to give him a pep talk was a nice callback to the Northampton arc and her powwow with Leo and Splinter.  I guess this is what she does, now.  It’s a bit repetitive, but it’s still fascinating to see the Turtles with a mother figure still active in their lives (even though she’s dead).

The speech she gives Donnie is a lot of ponderous pseudo-philosophical babble.  It’s a two-page merry-go-round of a lecture about light and dark, seen and unseen, and the balance between them.  In the end, it’s just a long way of asking whether he wants to live or die.  Hmmm, such options.

Also, did Casey Jones just win a fight?  In an IDW comic!?  Saints be praised!

I’m being snarky, but you’ve probably noticed by now that I’ve taken considerable umbrage with what a pathetic joke IDW Casey has become over the past few years.  From the standpoint of the narrative, I can sort of see it.  He’s been through physical turmoil (Shredder stabbing him) and emotional trauma (Hun being his dad), so he hasn’t been on his A-game for a while.  But man, it’s been a WHILE.  He just keeps getting beaten up and humiliated and he hasn’t come out on top since, like, 2012.  It’s been no fun being a Casey fan.

Admittedly, he only manages to smash three nobodies this issue, but baby steps.  We’ll see how he handles himself against Hun next month; if he continues to be IDW’s doormat or if he finally starts acting like Casey Fucking Jones again.

Also, Foot stuff, but eh.  Just Shredder and Baxter teaming up and Karai possibly undermining her grandfather’s authority.  We’ll see how that plays out.  I’m more interested in seeing Karai finally come into her own as a character than whatever Shredder’s got in store.

Also, Santolouco is back.  I’ve started to see what people are talking about with his Turtles; they are very “cutesy” looking.  Compare to how he drew them back in Secret History of the Foot Clan and they look like they’ve actually gotten younger over the past few years.  It doesn’t bother me as much as it seems to bother a lot of other people, but I do think I’m starting like Cory Smith’s Turtles over Santolouco’s, if only because they don’t look like they’re eleven years-old.

That said, man, this guy can layout a page.  Casey’s comeback rubbed off as such a big deal to me because Santolouco made it look so dynamic and kinetic.  I mean, it’s just Casey whooping three nobody punks, but jeez did it look good.

Charles Paul Wilson III also shows up for the Tang Shen pages.  IDW always dusts him off for sequences involving Feudal Japan or Tang Shen and he’s really become synonymous with that corner of the IDW TMNT universe.  I dunno if he colors his pages himself or if Ronda Pattison does it, but I love the softer touch with all the visible brush lines.

Anyhow, I didn’t see a title anywhere, but I think we’re into the “Vengeance” arc.  Unless IDW changed the name of the storyline leading up to #50.  It’s all building up pretty nicely and while this was sort of the standard “breather” issue between big event arcs, it didn’t come off as being any less tense thanks to all the suspense with Donnie.

Grade: B (as in, “But did Shredder’s hair get twice as long between issues?”)