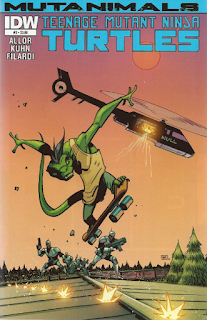 At the train yard, Slash tells his (non-lethal) strategy to Mondo, who hotwires an old truck.

Inside the train, Hob and the other Mutanimals are introduced to Ray and Sally Pride, other experiments of Null’s.  Sally insists that she could drive the train to freedom if she could just get out of her cell (having been reflex-tested on driving sims at the lab), but Hob has a better idea: Wait for Slash and Mondo. 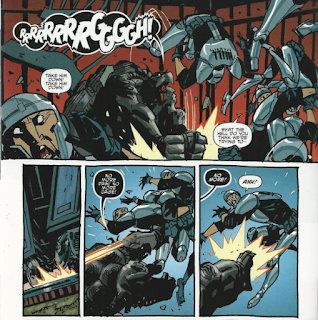 Slash and Mondo jump from the truck to the train and get inside the car, only for the car to fill with guards.  They overwhelm Mondo instantly and force him into a cell.  They try the same thing on Slash, but seeing the cages makes Slash lose his mind.  He rampages, hurling guards out of the train and ripping the bars off the cell doors.  His violence derails the train and it crashes.  Everyone is okay, but even after Slash calms down, his friends still fear him.

Lady Null arrives via chopper to the roof of her building.  A pair of guards inform her of their failure to keep the mutants locked up and she isn’t happy.  Jillian and Lindsey then arrive and Null tells them she plans to start over and have a new batch of mutants ready by the next fiscal year.  Lindsey tells her that after seeing her organization, she has to make a moral objection and quit.  Null informs her that mutant technology now exists and it WILL be used by someone, somewhere, and so she would be better off benefitting from it.  And anyway, if she tries to quit, she’ll get tossed off the roof of the skyscraper.  Lindsey tries to call Null’s bluff, but Null proceeds to grab one of the guards who failed her and drain him of his life, turning him into a withered corpse. 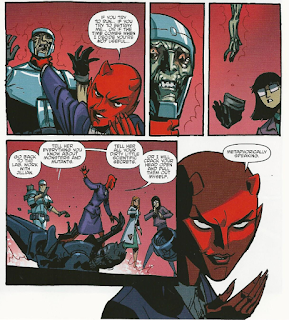 In the elevator going down, Lindsey and Jillian get into a fight.  They exit into a stairwell so the cameras can’t see them and Lindsey accuses Jillian of lying to her about Null’s intentions.  Jillian says that she had no choice; she was in too deep and needed someone to help her get out.  Just then, guards show up to escort them back to the lab.

At Mutanimals HQ, Slash is bummed about how he lost control and how everyone was afraid of him.  Hob tries to cheer him up just as Pete walks in, finishing the tour for Ray and Sally.  Sally wants to destroy the lab, suggesting that one of Null’s familiar experiments return and setup an ambush (hearing this, Mutagen Man sneaks away).  Ray suggests that the lab isn’t the root of the problem; they need to get to Null-herself.  She’s vain and cruel, wanting to crush her opponents personally, and Hob figures they can use that to draw her out. 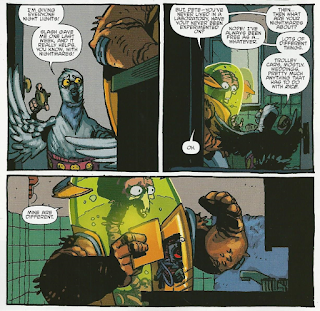 Later, Pete is installing nightlights in the HQ when he finds Mutagen Man in the bathroom, messing with his suit’s wiring.  Mutagen Man asks what kind of nightmares Pete has and Pete talks about what scared him when he was just a normal pigeon.  Mutagen Man confesses that his nightmares are much different.  He then flees the HQ, running past Mondo and Herman, who try to stop him.

Mutagen Man arrives at the lab claiming that his suit is malfunctioning and the guards bring him to Lindsey and Jillian.  Lindsey is horrified at the sight of Mutagen Man, but Jillian brushes her off and promises to help the mutant.  Mutagen Man shows them the broken part of his suit, but reveals that he rewired it himself.  He’s overheating and in a few minutes he’ll explode, taking them all with him.

While this issue didn’t feel so much like it moved the story along (aside from the daring rescue and Mutagen Man going suicide-bomber), it was rife with little character moments.

We get a little glimpse at Mondo’s rebellious, punkish side as he hotwires that truck.  Kinda calls back to the Archie series, where he knew how to pick locks (or the Fred Wolf cartoon, where he was an out-and-out crook).  It’s a small thing, but it illustrates that he’s not just the vacuous skater dude and there’s a more devilish streak to him.

I liked Pigeon Pete’s little talk with Mutagen Man about nightmares.  Pete was never experimented on in a lab or horribly tortured, no, but his fears stem more from the life-or-death, eat-or-be-eaten existence he endured before he was transformed.  So even the comedy relief character gets a moment of heart.

As for Slash “hulking out”, well, I’m not so sure if that’s the direction they should have gone with the character.  So basically, Slash is a highly intelligent, gentle and thoughtful individual until something makes him angry, then he loses control and turns into a berserk cyclone of indiscriminate destruction.  Does that sound like anybody else to you?

Yeah, so what the fuck is IDW going to do when they get around to introducing Leatherhead?  The Jekyll/Hyde or Banner/Hulk thing is essentially Leatherhead’s entire stock and trade.  But Slash has just called dibs on that archetype.  So is Leatherhead’s whole shtick going to wind up feeling redundant alongside Slash?

Or maybe IDW will surprise us and we’ll get Cajun swamp trapper Leatherhead!  Hey, I can dream.

This issue was mostly “little talks” between the characters, which did a good job getting into their heads or defining their relationships, but doesn’t leave me with too much more to discuss.  The characters sort of exposit or explain their feelings during these talks, so there isn’t a whole lot for the audience to think about.

Regarding the action, well, after the recent Amtrak derailment that happened right after this issue was published, I think we all know you don’t just walk away from a train derailment without a scratch on you.  Even without the tragedy in the news, that moment was still pretty goofy.  Kuhn draws the derailment as this big disaster full of twisted metal and fire, yet everyone just brushes themselves off with a “meh”.

As for the new characters, Sally and Ray, we still don’t have the best feel for them outside of broad strokes.  Sally is wild and hotheaded while Ray is more pragmatic and patient; but then, we figured that much out from their brief dialogue last issue.  I’m sure they’ll get more to do as things progress, we just don't have a lot to go on, yet.

Oh, and Null sucked a guy dry (his lifeforce, I mean).  Makes me wonder what her deal in the scope of the IDW universe is, now.  Is she a literal demon from Hell like Archie’s Null?  Or is she maybe connected to the Pantheon alongside Kitsune, Rat King and Chi-You?  All of them are based on regional folk lore and mythology, so with Null taking on a very cartoonish appearance of a devil, she would fit right in.

Anyway, this issue was a lot of talking, but at times it was like it was talking to the reader, not the characters.  “This is how I feel”, “this is my story”, “this is my personality”, “this is my evil plan”.  I get that exposition and awkward phrasing is a necessary evil for reader benefit, but it was just a lot crammed into a single issue, that’s all.

Grade: C+ (as in, “C’mon, Mutagen Man.  We JUST had a conversation last issue about how the Mutanimals don’t want to act like terrorists and now you’re going to turn into a suicide-bomber?  In one ear and out the other with that guy”.)