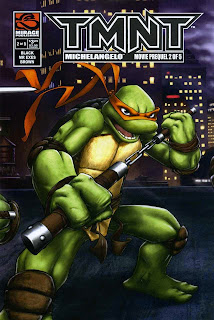 “The Continuing Story of Cowabunga Carl”

Donatello and Michelangelo have perfected their “mascot” idea in the form of Cowabunga Carl, a costumed entertainer who does birthday parties and sporting events.  Basically, Mikey dresses with a huge foam turtle head on while Donnie works IT from the back of their van.  The pair head over to a hockey game, where Cowabunga Carl has been hired to entertain a bunch of shelter kids that Casey has brought along.  Suddenly, a thug snatches a purse from an old lady. 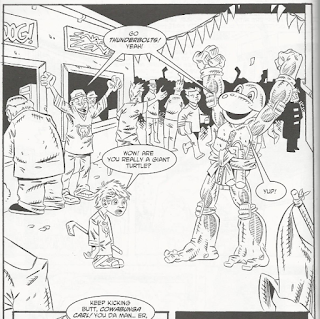 Despite Donnie (through an earpiece) repeating Splinter’s warnings about not interfering in the surface world, Mikey chases after the thug.  Following him through a maze of hallways and doors, he accidentally winds up on the ice.  He’s tackled by security and brought to a back office until the cops arrive to question him.

Mikey radios Don who looks up the building schematics and finds a vent Mikey can use to climb out.  Meanwhile, Casey distracts the guards with a false fire alarm and once the coast is clear, he joins Mikey in his escape.  Once on the roof, Casey tells Mikey he has to get back to the shelter kids he’s supposed to be chaperoning and wishes him good luck. 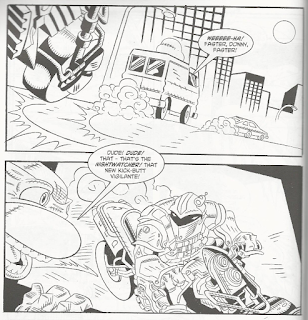 After reconvening with Don, Mikey sees the thug escaping in a car and they give chase.  Along the way, they pass the Nightwatcher on his motorcycle.  Mikey practically worships the vigilante, thinking he’s the coolest, but Donnie doesn’t trust him.  Unfortunately, the thug gets away, though Donnie slipped a tracking device onto his vehicle.

Mikey heads over to a suburban neighborhood to entertain a birthday party while Donnie keeps tabs on the thug.  By pure coincidence, the bad guy drives into the suburb where Mikey is.  Mikey, wanting to be just like the Nightwatcher, stands in the middle of the street and forces the thug to stop his car.  He then beats him up and regains the purse (which he later delivers to the old lady’s home). 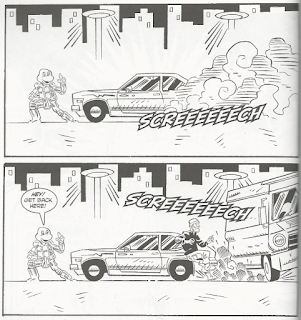 Back in the lair, Splinter berates the two for interfering in the surface world AND for forgetting to bring him a slice of birthday cake.  He warns that if they ever try to play heroes again, he will forbid them from continuing their Cowabunga Carl business.  Mikey whines that with Leo off training and Raph brooding who-knows-where, he and Donnie just want to find their own path and do the right thing.  Mikey sighs and hopes that someday he can be just like his idol: The Nightwatcher.

*This issue was reprinted in TMNT Comic #4 and TMNT Comic #5 with new colors by Junior Tomlin.

So yeah, this was kind of a dumb story.

Author Jake Black plays up Splinter’s command that the Turtles not “interfere in the surface world”, though I’m starting to wonder how that makes any sense.  In the 2007 movie, Splinter explains that he forbade them from fighting crime because their team was fractured and they weren’t mentally or physically ready.  Okay, that made enough sense, but last issue Splinter had ALREADY ordered them to stay away from the “world of men” even when they WERE all together and working as a team.

So right away, Splinter’s reasons for not wanting the Turtles to go to the surface and fight crime are faulty at best.  I mean, the REAL reason he won’t let his sons nab purse-snatchers is because the writers need to manufacture tension for the narrative.  More and more, Splinter’s irrationality is making that fact obvious.

But yeah, Mikey’s dilemma in this issue is that he wants to help people and do the right thing because he has a good heart and all that, but Splinter won’t let him.  The idea is fine, but like I said, when the excuse is so flimsy and contrived (Splinter is just being a dick, basically), it starts to fall apart.

Mikey is also shown worshipping and fawning over the Nightwatcher (unaware that it’s Raphael’s alter ego), repeatedly giving “when I grow up, I wanna be just like him!” speeches.  I didn’t think the Turtles were so young that they’d still be doing the whole “when I grow up” thing.

Also, escaping from security shouldn’t have gotten Mikey off the hook.  The cops already know that they need to arrest Cowabunga Carl.  And presumably, the Cowabunga Carl business is listed in the phone book or on the internet or something.  Realistically, this should have killed Mikey’s mascot enterprise.

The art from “Mr. Exes” is… not very good.  I think I understand why he chose to use a pseudonym (that sounds like an internet message board handle).  Facial features are so over-detailed that characters look positively geriatric.  Even the little kids that Casey brings along to the game look like midget octogenarians.  And hell, I wasn't even sure that cro-magnon was supposed to be Casey until Mikey addressed him by name.

“Exes” even resorts to that cardinal sin of the lazy artist: Copy and paste.  He frequently copies panels and then pastes and repeats them with either no changes or minor alterations and it looks really bad.  The scene where Mikey stops the car and the page where Splinter scolds them are the worst offenders (the scolding scene in particular, as he uses the same drawing of Splinter across four separate panels).

If Mirage’s website is accurate, then all these prequel comics came out in the same month, presumably just a week apart.  They all wind up looking really rushed and low quality, with this issue being one of the least appealing.

Grade: D (as in, “Damn, I forgot to explain why Casey was chaperoning a bunch of shelter kids.  Oh wait, Jake Black forgot to write an explanation into the script!  Silly me”.)