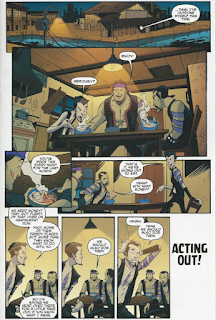 At Purple Dragon HQ, three of the Dragons are sick to death of eating homemade spaghetti.  They decide to head over to Restaurant Row and steal some cash and some food.

On the rooftops, it’s Mikey’s turn to pick their training exercise and he wants to roleplay as Super Robo Mecah Force Five.  Mikey is Captain Dash Coolstar, Donnie is Dr. Blip, Leo is Squeakums the Space Chimp and Raph is the villain, Cyberoid X.  Although Raph thinks the whole thing is lame, he follows Leo’s advice to humor Mikey and play.

Down below, the Dragons are about to knock over an Italian joint when suddenly they see the silhouettes of the Turtles on the roof for a split second.  Scared, they decide to try their luck someplace else. 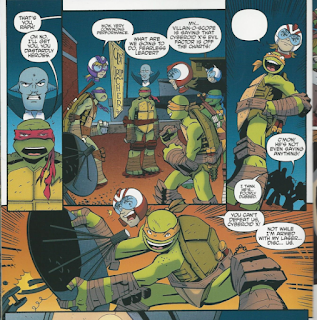 On the roof, the Turtles don’t even know about the Dragons.  Raph is phoning in his performance while Mikey gets so into it that he throws a satellite dish off the roof, pretending it’s a discus.

Meanwhile, the Dragons are about to rob a French restaurant when the dish plows into them.  They see the silhouettes of the Turtles and decide to look elsewhere. 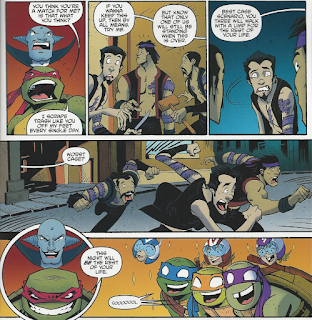 They settle on a trendy bakery and go around back.  That’s when Raph finally gets into his part as the villain and gives a tour de force monologue about destroying his enemies.  The Dragons are so scared, they run back to their hideouts.

The Turtles are impressed with Raph’s thespian skills, all having been unaware of the Dragons.  As for the Dragons, they decide to eat their slop and like it.

*This is the last story in TMNT New Animated Adventures.  But the continuity will continue in TMNT Amazing Adventures #1.

With this being the last story published in New Animated Adventures, I want to talk about the comic as a whole.  But first, I’ll give my feelings on this story.

The plot is only okay; it sort of feels like something we’ve seen before.  The Turtles are training/playing and along the way they thwart a crime without even realizing it.  I know we’ve seen that setup somewhere else.  It’s not a bad comedy relief plot and I enjoyed a lot of the dialogue between the three Purple Dragons, who have a lot of personality for such a short story.

The visual execution from Ferreira is more impressive.  As the Turtles play, they’re constantly followed by the floating heads of the Robo Mecha Force Five characters they’re pretending to be, giving us a picture-in-picture view of their imaginations.  It was a neat effect.  There’s also a gag where Mikey opens his mouth, but delivers a blank speech bubble, intimating the bad dubbing of the anime show they’re recreating.

It was an alright back up with some very nice art and a few gags that stand out.

As for New Animated Adventures, well, this book has been in trouble for quite a while.  I’m surprised it managed to last a full two years, admittedly.

For a while now, issues have been moving only 5-6,000 units (according to Diamond) and that’s really bad.  It’s been a low seller, which doesn’t necessarily reflect the quality of the title in any way, but it most certainly hasn’t been attracting a wide readership.

New Animated Adventures changed a lot over the course of its run.  It started out as full length stories, then moved on to anthology status with 2-3 isolated tales per issue, then finally settled on a serialized two-parter with an episodic back-up.  You can see how the title was trying pretty hard to find a system that worked.  For what it’s worth, I think the format they ultimately settled on was their best bet, though they should have taken the serialized segment further than just two-parters (which often simply felt like a single issue story that got bisected).

The book hadn't been bad for what it was, but there was just no… hook.  Nothing to force readers to come back for more.  The episodic tales felt inconsequential and you could miss a dozen installments and feel at a loss for nothing.  If the A story had been an ongoing continuity (and the B story an episodic back-up), then that might have made for the hook to keep people reading from month to month.

But I suppose the big hurdle had been the fact that New Animated Adventures had to stick to the continuity of the TV series without ever disrupting it or contradicting it.  That meant that by its very nature, New Animated Adventures could never tell stories that mattered.  There could never be any impact.  No decisive battles with any enemies, no character development, no ongoing storylines with resolutions, no nothing.  The Turtles couldn’t even fight the Shredder because that might contradict one of the Shredder fights in the show, which the cartoon uses sparingly for punctuation in the season narratives.

So there was just no draw.  There were many good stories in New Animated Adventures, but they always, ALWAYS had to put things back the way they were before they started.  Because otherwise they’d contradict the show.

The good news is that Amazing Adventures, at least according to editor Bobby Curnow, has been given license to deviate from the continuity of the cartoon.  How much they’ll deviate, like if they’ll go full Archie, only time will tell.

I hope Amazing Adventures finds the sort of footing New Animated Adventures never did.  I enjoy the Nickelodeon incarnation of the TMNT and want to see more of them, but I was getting pretty bored with these episodic tales that had to constantly pick up after themselves.  Here’s hoping the new volume does something fresh or at least gives us a fight with the fucking Shredder.  I mean jeez.

Grade: C+ (as in, “Can’t say I really liked the Mecha Force Five show-in-show gag.  It was no Space Heroes”.)