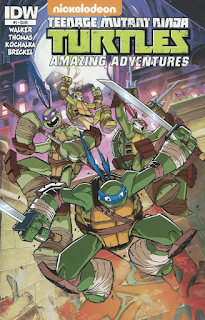 Near the docks, Donatello uses his mutagen tracker to investigate reports that their friend, Doctor Cluckingsworth (whom they’d left at the farm in Northampton) has come to New York.  They find the hyper-intelligent chicken chasing Fishface into the water and approach her for answers.  She hits them with a mental attack and the last thing they see before blacking out are the feet of a stranger wearing shoes with a bizarre design on them.  The strangers tells Cluckingsworth that these aren’t the mutants he wants.

The Turtles revive and return to the lair to research the symbol they saw.  Donatello determines that it’s the sign on the Japanese zodiac and this news interests Splinter.  He goes with them to the docks to search for clues. 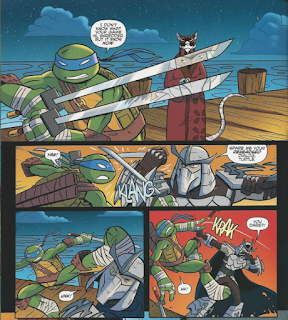 There, they’re approached by an injured Shredder.  The Turtles attack him, but he handily defeats them all.  As it happens, he hasn’t come for a fight, but for help.  An old foe of both Oroku Saki and Hamato Yoshi, the Zodiac, has returned.  He has kidnapped several of Shredder’s mutant henchman, but more importantly, he has taken Karai.

Pigeon Pete then swoops down to warn them that the Mutanimals were attacked.  A smoke grenade explodes and the Turtles find themselves surrounded by mind-controlled friends and foes: Leatherhead (dragon), Bebop (boar), Tiger Claw (tiger), Dr. Rockwell (monkey), Doctor Cluckingsworth (chicken) and Karai (snake).  The Turtles fight them off, but hold back as they don’t want to injure their friends. 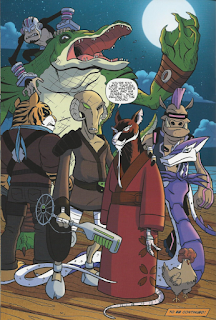 A ram-man whom Splinter recognizes as Tetsumi Onamota then arrives and declares himself to be the Zodiac.  Using some sort of force power, he clears the battlefield, then using a strange machine, he seizes control of Splinter’s mind (as Splinter represents the rat of the zodiac).  The Turtles recover in time to see a mind-controlled Splinter joining Zodiac’s group.

Down in the lair, Michelangelo has come up with a new way to cook pizza: With volcano power.  Unfortunately, there are no volcanoes in New York… except the small one that just punched through the sewers beneath the city. 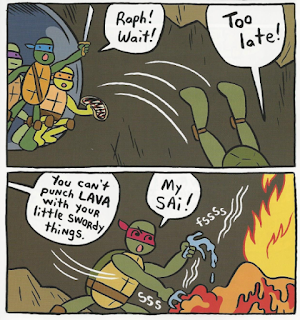 The Turtles race to extinguish the volcano, which cannot be stabbed by Raph’s sai (and also melts Mikey’s pizza).  Leo is at a loss as to what to do, but Donatello is on it.  He texts April and asks her to order all the people of New York to flush their toilets.

They do, and the tidal wave of sewage quenches the lava.

*This issue is continued from TMNT New Animated Adventures #24.  The story continues in TMNT Amazing Adventures #2.

*Judging by the character line-up of Zodiac’s mutant army, this story takes place sometime during the second half of season 3 of the Nickelodeon TMNT cartoon.  It's after “Battle for New York, Part 2” for sure.

*Just to be a stickler, “Kaesaremasu" (かえされます) is not "ancient Japanese", as Donatello states.  It's not even complicated Japanese (-masu form, polite form, is the simplest conjugation of Japanese and is how foreigners are taught the language).  Incidentally, it translates to "(he) has returned", albeit the tense is incorrect.

*This issue was originally published with 2 variant covers: Regular Cover by Jon Sommariva, and Subscription Cover by Andy Suriano.

I commented on what I felt was the book’s failing in the last issue of New Animated Adventures, but to summarize: It was hampered by its need to stick to the show’s continuity.  I did an interview with author Landry Walker not too long ago and he also lamented the frustrations and limitations caused by this edict.

Well, evidently the IDW guys worked things out, as Amazing Adventures will be deviating from the continuity of the cartoon and following its own narrative path.  Exactly HOW MUCH it will deviate remains to be seen; will it go full Archie or will it simply contradict the cartoon while also maintaining its spirit?

Either way, I’m looking forward to how things will turn out.

And to start this book off right, Walker gives us the one thing New Animated Adventures was reluctant to provide: The Shredder!  The previous volume avoided using the Big Bad outside of throne room commanding sessions, as that might disrupt the canon of the TV series, but with that shackle now unlocked, we can finally get Shredhead in one of these freakin’ comics.

Admittedly, he doesn’t do a whole lot aside from help setup the ominous threat of the Zodiac, but it was still refreshing to see him pop up and kick some ass.  There’s some filling out of Saki’s and Yoshi’s history together, or at least it’s implied thus far, and I’m looking forward to seeing that.  The recent season 3 episode “Tale of the Yokai” did some of the same and it was very good.

Walker’s original villain, Zodiac, is one of those “holy cow, I can’t believe nobody thought of this until now” situations.  A villain collecting existing mutants to form a team based on the Japanese/Chinese Zodiac… It seems so intuitive in retrospect.

8 members of the zodiac appear in this issue (Rahzar is mentioned as having been abducted, and he’ll cover the dog symbol, though he doesn’t appear).  Zodiac seems to be filling in for the ram symbol, so that just leaves rabbit, ox and horse.  I wonder who’ll be covering those symbols?  Will they be new mutants cut from whole cloth or will they be updates on classic mutants long forgotten (Groundchuck for ox?).

IDW also selected a great artist to pair with Walker: Chad Thomas.  He was one of the best to come out of New Animated Adventures and I hope he sticks to Amazing Adventures for a good run.  His pencils are kinetic and expressive, but always fun and just a tiny bit cute.  He’s a great match for this title.

The back-up by James Kolchaka was alright, I guess.  He’s very popular among the indie comics crowd and I know he has his fans, but the guy’s humor is so dry it just doesn’t do anything for me.  I tried thumbing through American Elf and the only reaction I got out of that was “creeped out” when he kept drawing his son’s testicles.  I’ve seen a bunch of his “Sponge Funnies” from the Spongebob Squarepants comic posted on image boards and I can’t find the humor in them, either.

But hey, the guy has his fans and if you’re crazy about Kolchaka then you ought to enjoy his back-up.

Overall, this was a very strong start.  They’ve got a solid creative team here and the promise that the book will find its own continuity leaves me with very high expectations.  I hope Amazing Adventures finds a higher sales figure than New Animated Adventures saw in its twilight.

Grade: B (as in, “But, to be a stickler again, Shredder refers to his mutant henchmen by their Michelangelo-coined names, ‘Rahzar’ and ‘Bebop’, whereas in the show he always referred to them by their real names, Bradford and Zeck.  …Hey, this book’s deviating from the show already!”)