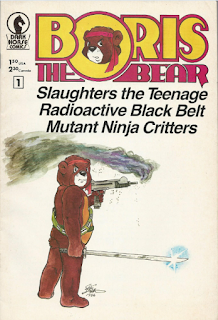 Boris the Bear is in his treehouse when he encounters a problem: All the black and white indie comics being published are about radical anthropomorphic animal youngsters that know martial arts.  He’s sick and tired of it!  Rushing past his friend Dave, Boris gears up with heavy artillery and goes on the hunt for clichéd indie comic book characters who need to be eliminated. 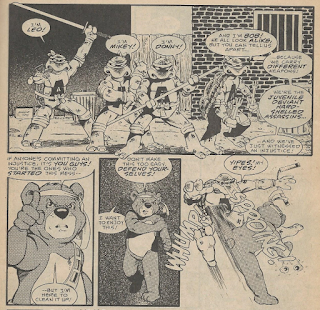 During his journey, he encounters the Juvenile Deviant Hard-Shelled Assassins: Leo, Mikey, Donny and Bob.  Boris punches Mikey so hard his eyeballs pop out, then chops his head off.  After that, he disarms Leo and punches a hole through his head.  Next, he breaks Bob’s wrists and then punches him in the face so hard his head explodes.  And finally, Boris catches Donny trying to sneak away.  He strangles Donny, rips off his shell and then slams him into the ground repeatedly until there’s nothing left of the Turtle but a greasy smear. 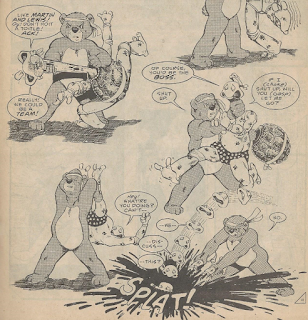 *For the record, this was a parody and not an official cameo from the TMNT.

*The Hard-Shelled Assassins and others from this issue will return in Boris the Bear #8.

*Also murdered in this issue are Miyamoto Usagi, Cerebus the Aardvark and the Miami Mice; all characters whom the Turtles crossed over with at some point.

*This issue received a second printing the same year.

I don’t typically cover parodies here at TMNT Entity.  There have been so many goofs on the Teenage Mutant Ninja Turtles over the years that I’d be reviewing into my 90s before I’d even be close to finished.

But it just so happens that while I was digging through the quarter bin at my local shop, I stumbled upon this thing and since I bought it, I might as well review it.

While the story is pretty dumb and just an excuse for mindless, over-the-top violence, it actually is a little funny.  Let’s be frank; there WAS an explosion of anthropomorphic animal characters in the indie comics scene of the mid-80s, and many were a reaction to the success of the Teenage Mutant Ninja Turtles.  Boris’ frustration with all these generic characters seems a pretty reasonable reaction when you take the context of the time period into consideration.

However, he does accuse several characters of being mindless rip-offs with no artistic integrity worthy only of being murdered and forgotten… who are now considered to be some of the greatest indie comics characters of all time.  And I ain’t talkin’ ‘bout the TMNT, either.

I mean, who the hell shits on Usagi Yojimbo?  I have never seen anyone ever rip apart that book as being knock-off garbage.  Granted, ’86 was pretty early into Usagi’s lifespan, but Richardson really jumped the gun on this one (so to speak). 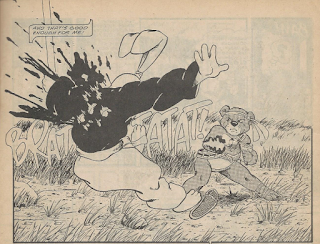 Likewise, he also rips into Cerebus.  And while the aardvark doesn’t have the best reputation these days, by ’86 his comic was still considered a contemporary classic that was innovating the sequential art form with almost every issue. 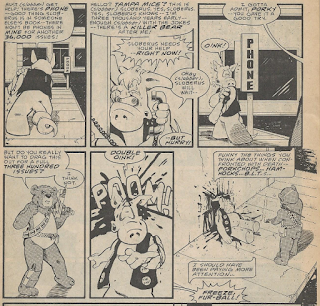 But fuck the Miami Mice, though.  Open season on those losers. 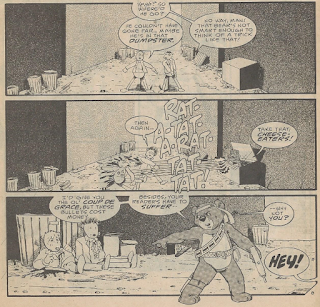 So some of the slaughtering comes across as maybe envy; Richardson seeing all these creators succeeding and innovating while the best idea he can come up with is Boris the Bear.  After reading Boris’ wiki article, apparently “killing characters more popular than he is” was the bear’s only gimmick.

I will say that the art is pretty great, though.  James Dean Smith does a fine job imitating the styles of all those other artists to make the parody characters feel authentic.  While he gets many of the little details right, he forgot to include a skull and crossbones speech bubble when Usagi dies.  What is this, Amateur Hour?

Like a LOT of forgotten ‘80s black and white indie comics, Boris the Bear issues routinely wind up in quarter and dollar bins.  With this having been released by a major publisher and having gotten multiple printings, you shouldn’t have too much trouble finding it for cheap.  The novelty, at least for one issue, is pretty fun in a cheap thrill sort of way.  The original characters and the story are dumb, but the art is pretty sweet.  Maybe grab it if you see it.

And no, I won’t be reviewing Adolescent Radioactive Black Belt Hamsters.  Absolutely never.