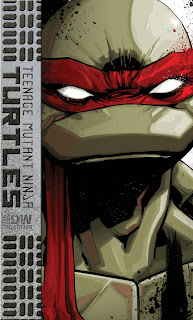 I don't normally shill for comic publishers, since I have nothing to gain from it, but I figured I'd promote this thing strictly out of passion.

This book has been delayed repeatedly for almost a year, stopping and starting so many times I think most fans either lost track of it or assumed it was cancelled.  But it's coming out tomorrow!

This volume collects IDW's TMNT #1-12 as well as TMNT Micro-Series #1-5 in chronological order.  Early reviews even indicate that it will include the short story "A Lot to Learn" from the TMNT 30th Anniversary Special (the story acts as an epilogue to the first 4-issue arc).

It's an attractive package and the best way to get into the IDW series if you haven't jumped onboard yet.  The current trades separate the main series from the minis and one-shots, so the narrative is all jumbled around.  With these collections, you get the most intuitive reading experience.

The only notable omission is the 2-issue Infestation 2: TMNT miniseries.  According to editor Bobby Curnow, the issues were omitted as a matter of space, not continuity, and since the main series never references their events, you won't be missing anything vital (you wouldn't even know they were absent if I hadn't brought them up).  But here's hoping they show up in a future Volume just because I like them.

As for me, since I own the issues in floppies, I won't be getting one for myself, BUT I will be using it as my go-to purchase for gifts for friends.  It's a good way to indoctrinate the uninitiated.