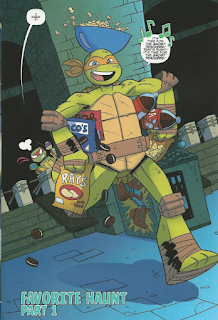 Having heard reports that the Squirrelanoids might be free from the septic tanks they were trapped in, Leonardo decides that he and his brothers need to patrol the sewers.  Mikey claims to be sick and unable to go on patrol, hamming up a head cold.  As soon as the other Turtles leave, they hear him gearing up for the season premiere of his favorite reality TV show: “Ghost Trackers”.  Wanting to teach Mikey a lesson, Leo comes up with a plan. 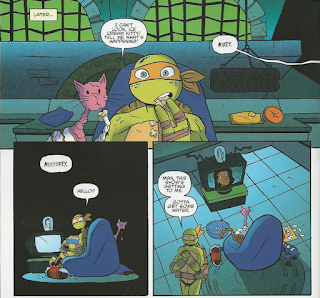 As Mikey and Ice Cream Kitty watch the host (Rebecca) search the New York City sewers live for spectral activity, they begin to hear a strange wailing.  Mikey goes to investigate and is ambushed repeatedly by a ghost samurai.  He runs screaming to his room.  Meanwhile, Rebecca hears screaming and laughing coming from somewhere in the sewers and decides to follow it.  She also picks up a faint radioactive signal.

Mikey eventually mans up and decides to take the ghost samurai down with a vacuum cleaner.  He attacks the ghost with the vacuum, sucking up its sheet to reveal... Donatello.  All three Turtles took turns playing the ghost to teach Mikey a lesson (he’s not amused). 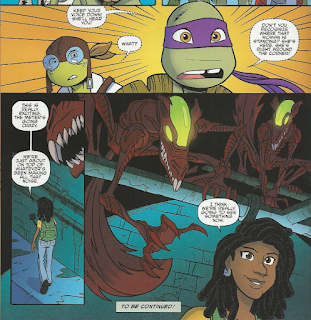 Donatello then takes a break from mocking Mikey when he notices where the host on TV is standing: Right outside the lair.  He tells his brothers to keep quiet, otherwise she may find them.  Rebecca, on the other hand, is completely unaware that the Squirrelanoids are lurking just over her head…

*The Squirrelanoids first appeared in the season 2 episode, “Invasion of the Squirrelanoids”.  They were trapped in the city septic tanks in that same episode.  Since the Turtles saw them free in the episode “Metalhead Rewired”, I guess that means this story takes place between those two episodes.

The Squirrelanoids!  More of those one-shot monster mutant villains who never amounted to anything but cameos after their first appearance.  Glad to see this comic trying to get some more mileage out of these sorts of characters.  Lord knows the cartoon isn’t gonna.

Admittedly, the plot is pretty corny, at least for this first half of the story.  Manning notches it up with some lively dialogue that’s nicely in-character and Thomas puts a lot of energy into his pencils.  They make a good team, as Manning is excellent at channeling the voices of the characters and Thomas does a good job of trying to render that faux-anime aesthetic with the “chibi” reactions and wild takes.  He doesn’t overdo it, thankfully, and the gimmick is more cute than irritating.

I think my favorite gag throughout the story was Ice Cream Kitty’s nonchalant reaction to everything.  I dunno, I just found the sight of her munching on popcorn and not giving a shit amusing.

Anyhow, in case you haven’t heard, New Animated Adventures is on its way out.  It never sold especially well (somewhere around 5-6k copies per issue, which is pretty bad) so it shouldn’t come as much of a surprise.  I’ll save my overall feelings about the series for the finale, which looks to be ending on an understated note; “just another story”.

All that being said, New Animated Adventures is going to be immediately revived as Amazing Adventures, so nobody get too upset.

Grade: C (as in, “Can somebody tell me what episode Mikey’s lucky underwear appeared in?  He’s wearing them in this story, but all attempts to google ‘TMNT’ and ‘underwear’ have yielded… unpleasant results”.)