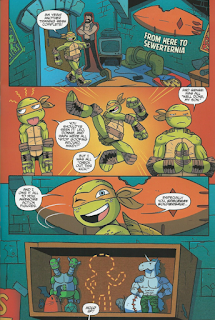 After finishing a training session, Mikey returns to his room to find his Spaceman Soldiersaur action figure missing.  Mikey goes on a journey to reclaim him…

Spaceman Soldiersaur awakens on the alien world Sewerernia, in the Pancake Palace.  He’s lost, but summons his sidekick Pixie Jones to get their bearings.  Jones finds a note from the villainous Grate-Or, warning them that he’s taken their teammate, Cowboy Carrier hostage.  They are to meet for a duel or Cowboy dies.

Soldiersaur and Pixie Jones begin their quest, but can’t find Grate-Or’s evil lair.  They’re suddenly assisted by the rock giant Gargantuapril, who gladly picks them up and hurls them toward the cave Grate-Or calls home. 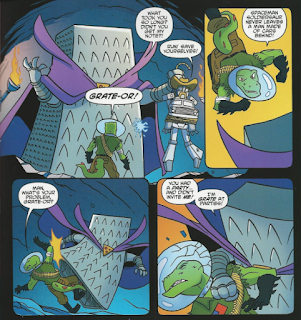 They arrive and confront Grate-Or (a giant cheese grater in a cape) who wants revenge for not being invited to Soldiersaur’s last party.  Grate-Or takes out a pair of nunchakus and begins bashing Soldiersaur with them, intending to turn him, Jones and Cowboy into a pizza…

In reality, Mikey is playing with his toys as part of his plan to relocate Soldiersaur.  Donatello finds the toy in the kitchen, sitting on a stack of pancakes.  Mikey is elated, but Donatello is less happy when he finds that he’s misplaced the T-phone he was upgrading.  Mikey understands his torment.

Chad Thomas drew both stories in this issue?  That’s uncommon; usually the main story and the back-up are split between two different artists.  Whatever, it’s not important.  He does a good job on both segments.

Goellner writes a fun, off-beat tale that maybe skews Mikey a little too young even in regards to the Nick series.  Has he ever been shown playing with toys like a small child in that series?

Well, whatever the case, it was a neat imaginary adventure, kinda reminiscent of the “Mikey dream” stories Landry Walker was writing over in the UK TMNT Magazine comic.  The He-Man parody could’ve been a little more realized, though.