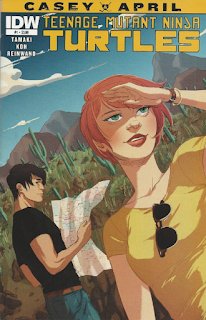 Exiting the Holland Tunnel in their VW van, Casey and April hit the open road and, eventually, reach the Southwest.  Stepping out to get their bearings, April takes a look at the scroll Dr. Miller stole from the Foot Clan (and died for).  She finds a drawing of a Joshua tree in a desert, which indicates to her that they need to go to the Mohave Desert to find information on the Pantheon (a family of warring deities).  Casey plucks up a heart-shaped rock and is about to give it to April when he accidentally says something scientifically stupid, eliciting an awkward correction from her.  He pockets the rock in embarrassment. 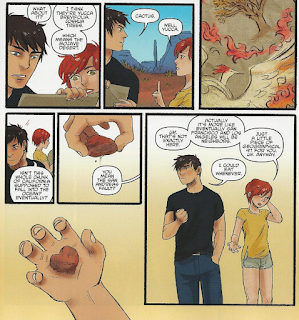 Moving on, they discuss their best memories of seeing the night sky (April recalls her trips to the Grand Canyon, Casey recalls trying to see stars through the light pollution in New York).  They inevitably conclude that if they’d known each other as kids, they probably wouldn’t have been friends.

Stopping at a diner, a couple of cowboys begin giving Casey a hard time over his name (sounding like the ballad about the train conductor).  This ends in a fight between Casey and the bullies and April has to force him to back off and escape in the van. 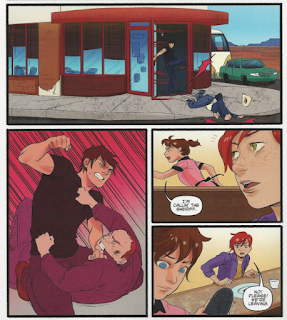 The pair argue and fight for a while, first over how Casey put their mission in jeopardy by nearly getting a visit from the cops, but also over the fact that he’s still thinking in terms of “I” and not “we”.  To take her mind off of how mad she is at Casey, April compares the scroll with a modern map and thinks the place they’re looking for might be an old armory now.

After stopping for gas, Casey absentmindedly (and angrily) backs into an old bumpkin’s truck.  The old timer isn’t mad, but he’s worried that his sister Red might get upset if he doesn’t show up to see her.  April offers to drive by in the van and let Red know what happened while the geezer's truck is being repaired.  Casey wants to check out the armory, though, so the old timer offers to let him borrow his old motorcycle.  April and Casey split up, and Casey chucks the heart-rock away in anger. 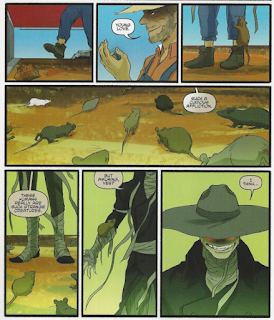 Once they’d left, the old timer picks up the rock and remarks about the curiosity of young love.  As a plague of rats swarm him, he slowly transforms into the Rat King.  The gruesome Pantheon member figures that it’s time to play a game with his two new friends…

*This mini-series takes place after the events of TMNT (IDW) #47.  The story continues in TMNT: Casey & April #2.

Hmmm.  I… Well, I just don’t think this kind of comic was meant for me.  It’s a slow-burn romance story filled with long rambling conversations between the two main characters as they sit and talk.  For 20 pages.  Talk about stars, talk about each other, talk about life, talk about talking… I mean, it’s a young reader’s romance story.  There are people out there who love comics like this; people who would rather read Spider-Man Loves Mary Jane over a “normal” Spider-Man comic.  Those kinds of people.

I’m just… not one of those kinds of people.  20 pages of characters sitting in a car or at a diner or pumping gas and rambling, the thrill being the “romantic tension” between them, it just doesn’t appeal to me.  Nothing wrong with anybody who likes that sort of thing, but man.  Wotta snooze-fest.

I’m trying to be open-minded and fair about this.  And I don’t blame IDW for casting a wider net by dabbling in a different genre to try and attract a fresh demographic.  The last miniseries we got was Mutanimals and it was a tidal wave of TMNT fanwank.  I loved it, but I understand that it might have had limited appeal to the uninitiated or the casual TMNT reader.  And looking at the Diamond sales numbers, the thing positively bombed, selling around only 8,000 units toward the end of the run.

So clearly, appealing strictly to hardcore TMNT fans may make for comics that excite a hardcore TMNT fan like myself, but they don’t do much for IDW’s bank account.  With that context in place, I can fully understand and appreciate why they’d go for a book like Casey & April that’s so tonally different from what they’ve been doing, aiming for readers who like teen romance stories.

All that being said: Ehhhhhhh.  I just couldn’t get into this comic.  I appreciate that April and Casey are finally getting a spotlight after being relegated to deadweight status in the TMNT ongoing for what feels like a year or more.  Their shelving in the main title to make way for 30 new characters has been pretty disrespectful, especially for what had originally been main characters.  So I’m glad to see them getting major screen time once again.  I just wish it could have been in a more exciting comic.

It isn’t just the long conversations that got me nodding off, it’s that what passes for action is horribly clichéd and predictable.  So they go to a diner and are immediately, IMMEDIATELY beset upon by cowboy hicks for no good reason whatsoever.  Remember when this happened in "Starman"?  Or "Superman II"?  Or seemingly any movie ever where the main characters decide to make an innocent stop at a diner where cowboy truckers are also present?

“Well, well, well.  If’n it ain’t two-a them city folks comin’ ‘round here with their Em Pee Three players ‘n their ten dollar coffees.  Ya’ll best go on back the way you come!”

It’s just so tired and worn out.  It elicits the “couple’s first fight” scenario that manufactures a romantic drama between them, but the whole thing is a dull contrivance at best.  The remaining “action” in the issue involves Casey swerving out of the way of a cyclist and a slight fender bender with the old man.  Edge-of-your-seat stuff, isn’t it?

The good news is the Rat King, my favorite TMNT villain, looks to be a major antagonist in this miniseries.  I’m hoping he adds a little more energy to this story, because it sure could use some.

The art dabbles in this faux-manga style that looks alright, I guess.  The faux-manga look and the whole “romantic teen drama” storytelling was what made me immediately think of Spider-Man Loves Mary Jane, by the way.  While I don’t really like it when people who aren’t Japanese try to ape what they think is “manga”, Koh doesn’t overdo it in the worst ways so the exercise is mostly inoffensive.  She draws an absolutely GNARLY Rat King, translating Santolouco’s original design very well.  That final cliffhanger splash page was a wonderful rendition of the character.

Colors by Paul Reinwand are quite nice.  He gives April back her fair skin and freckles, which haven’t been seen since the Secret History of the Foot Clan miniseries, but are a detail I really liked (and really missed).  His most outstanding color work comes in the Rat King pages, of course, particularly in the green hues he gradually bathes the panels in.  It’s not so much a glow, but a subtle, unearthly lighting choice that makes the moment all the creepier.  He also elects to color only one rat among dozens completely white, which makes me think of Socrates from “Willard”.

In conclusion, I will concede once again that these sorts of stories just don’t appeal to me.  Doesn’t mean they’re bad, it just means I don’t like them.  That said, objectively the issue has problems: namely that stupid hackneyed fight at the diner and the almost insultingly on-the-nose symbolism of the heart-shaped rock.  The art is alright and the coloring is great.  I hope it gets a little more exciting in future issues, but I am curious to see more of the Rat King.

Also, looks like IDW has cut back the length of their TMNT miniseries issues from 22-pages to 20-pages, but the $4 price tag remains the same.  Fuck that.

Grade: C (as in, “Cowboy hats are worn exclusively by thuggish jerks who don’t like anyone who follows a different way of life than them.  I thought everybody knew that”.)