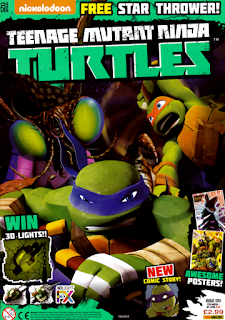 At Foot HQ, Baxter Stockman shows the Shredder his latest inventions: Killer robots based on the natural predators of the turtle.  Shredder is not impressed by the Cyber-Raccoon (of Doom), the Mecha-Squid (of Doom) or the Baxterbot (of Doom) and destroys them all.

Baxter has one last invention, the Robo-Samurai (of Doom) and the Shredder, sick of this shit, sends his Footbots to destroy it.  But the Robo-Samurai is programmed with the skill of hundreds of martial arts masters and easily destroys the Footbots.  Intrigued, Shredder allows Baxter to sic the Robo-Samurai on the Turtles. 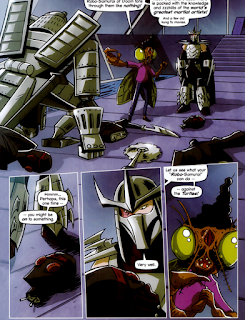 The Turtles, meanwhile, are out on a training run.  The Robo-Samurai attacks them in an alley and with minimal effort, defeats them all.  The Turtles, try as they might, cannot compete with the skills of hundreds of martial arts masters.

Baxter begins transmitting through a monitor in the robot’s face and starts to gloat.  The Turtles taunt him, tricking him into switching from automatic to manual so he can crush them himself.  This is a bad move, as he has no idea how to fight.  Don deduces that the Robo-Samurai’s weak points are its joints and the Turtles take it apart. 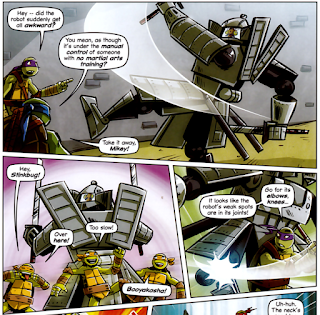 Back at Foot HQ, Shredder has watched the whole thing and wants to “reward” Baxter Stockman’s “genius”.  Baxter insists he has an even greater invention in the works: The Robo-Badger.

*Shredder already tried to destroy the Turtles with a robot samurai (Chrome Dome) in the season 2 episode, “Target: April O’Neil”.  Chrome Dome appeared a few episodes later in “Vengeance is Mine”.  I guess Baxter missed those episodes.

I think the drawback of this adventure is that it’s a lot of “been there, done that”.  The Turtles fight robot ninja all the time and fought Chrome Dome (a robot samurai) once before, already.  So another robot samurai doesn’t seem particularly exciting or threatening.  There’s a throwaway line in there from Raph about how often they fight robot martial artists, but it seems more like Fisch is trying to cover tracks.

The bright side is that this is the most substantial appearance from the Shredder in ANY of the comics (US or UK) based on the Nick cartoon.  Some stupid, self-imposed rule keeps the Shredder on the sidelines because the writers don’t want to interfere with the show’s continuity, so he’s hardly appeared thus far in either book.

Fisch finds an interesting way to give the Shredder screen time without having to pit him directly against the Turtles.  He’s still micro-managing, but at least he gets some dialogue and screen time.  I don’t really like Shredder as an armchair antagonist, but those are the cards these Nick-based comics have been dealt, I suppose.

The resolution is pretty stupid and sloppy, though.  This was a double-length story, but still felt terribly rushed.