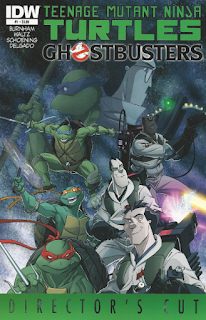 *Introduction by Erik Burnham
*Complete reprint of TMNT/Ghostbusters #1
*6 pages of notes and behind the scenes commentary from Erik Burnham, Tom Waltz and Dan Schoening
*Complete final draft of the issue’s script

*Although Director's Cuts of the remaining issues are not planned, Erik Burnham has put issue commentary for #2-4 up on his Tumblr account.

I don’t normally double dip.  In fact, if all these extras had been released in a trade or a hard cover, I’d have never bought it.  Yet release it as a floppy and call it a Director’s Cut?  Yeah, I’ll go for it.  I’m a sucker.

If you haven’t bought the TMNT/Ghostbusters miniseries, then you could either wait for the trade or go for these Director’s Cut editions.  I don’t think they’ve solicited any new ones yet, but hopefully they’ll do the remaining issues.  It’s an added incentive for those who weren’t quite lured into picking up the mini the first time around (and the added cost is just a dollar).

The presentation is very nice; it’s soft cover but with a spine so you can put it on your book shelf if you want.  The complete issue #1 is reprinted without any alterations; the commentary and annotations are printed on separate pages littered throughout the book rather than overlaid onto the art.

As for the commentary and annotations, Burnham and Waltz don’t provide too many juicy insights.  In fact, a lot of their commentary is just mentioning who wrote which joke and describing what moments in the TMNT comic the characters are referring to.

Schoening’s annotations are a bit more entertaining, as he reveals every single Easter egg he snuck into each panel.  And boy, there were a lot more than I ever found.  Many of them are in-jokes us rabble wouldn’t get, like characters designed after the colorist’s extended family, but others were nicely tucked away or obscure and slipped right past me.

The script is a curious inclusion, though being a final draft it offers no deviations from the finished comic.  An earlier draft might have been more interesting; to see what got changed or dropped.  Burnham’s scripting style is also very dry and bare bones; he isn’t one of those comic writers who livens their script up with elaborate prose or colorful asides the outside world would otherwise never see.  The script is a neat thing to have, but the appeal is pretty limited.

Anyhow, this was a cool bonus; I actually hope they do the rest of the series.  Maybe Waltz’s and Burnham’s commentary will get a little more candid and I’m curious how many more Easter Eggs I completely missed. (EDIT: According to Burnham, there are currently no plans for more Director's Cuts.)