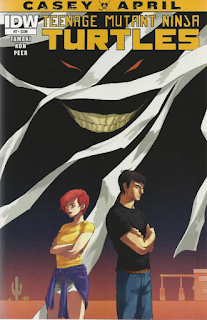 In the van, April listens to ironic music as she heads to Red’s place to tell the old lady her brother will be late.  Along the way, she tries to take her mind off of Casey.

As for Casey, he continues toward “the armory” on the old man’s motorcycle, but when he gets there he finds the place overrun with thorn bushes.  After kicking himself for letting his anger get the best of him and upsetting April, Casey hears a scream and rushes into the thorns to help.

Meanwhile, April stops to help a stranded mother change a flat while her two daughters argue over cactus types.  April unloads all her problems onto the mother’s ear, mostly about how she doesn’t know where she’s going with her life. 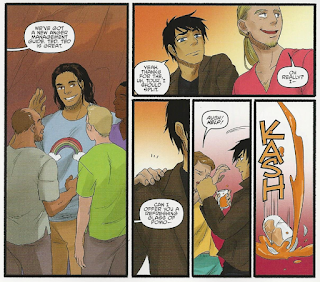 Casey makes it through the thorns and finds that “the armory” has long been taken over by a men’s peace group: “The Broken Sword Spiritual Healing Center for Men”.  Casey loses his temper and lashes out at Sam, the leader of the group trying to offer him guidance.  As Casey storms off, Sam tells him that at some point he’ll have to face his fears.

April bids the mother farewell and continues on her way.  She gets a call from Casey, but the connection is bad and their talk is a jumbled mess of misunderstandings.  Casey tries to tell her that the armory was a bust while April tries to tell him that she’s coming up on Red’s camper.  Somehow, from that discussion, April zeroes in on the phrase “breaking up” while Casey recognizes April’s dissatisfaction with him. 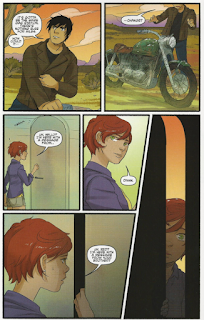 Their call disconnects.  Casey tries to call back, but can’t get a connection, so he hops on the old man’s bike and heads back to the gas station.  When he gets there, he finds that the station has been abandoned for years and is infested with rats.  He turns to the bike he borrowed and sees that it’s nothing but a rusted heap of junk.  Sensing something wrong, Casey races down the road to try and reach April.  He attempts to call her and tell her it's a trap, but his call won't go through.

April pulls up to the camper and knocks on the door, but no one answers.  The door creaks open by itself and April cautiously steps in.  She discovers that the inside of the camper looks like a sprawling Japanese-style home.  A clawed hand reaches out and slams the front door behind her, sealing her inside. 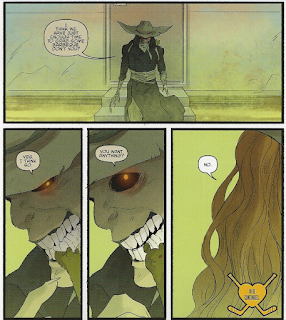 Outside, the Rat King ponders that it might be time to get some barbecue.  He asks an unseen individual if they want anything, but they decline.

*While talking to the stranded mother, April recalls events from TMNT (IDW) #13, The Secret History of the Foot Clan (I think?) and TMNT (IDW) #24.  The middle panel with Casey protecting April from an explosion is the one I’m a little iffy on.  April has short hair in all the flashbacks, too, which is a mistake.

*This issue was originally published with 2 variant covers: Regular Cover by Koh, and Subscription Cover by Jennifer L. Meyer.

So the miniseries is still kind of boring, I can’t really put it any other way, but it looks like Tamaki is taking the slow burn approach to tension building.  I’ll admit there’s an atmosphere to this issue that I’m starting to sense and even if it is taking it’s time to ratchet up, the second half of the issue begins to get pretty eerie.

I’m sort of reminded of a David Lynch movie, where things are weird and unsettling, but “big scary” moments are staggered out and rare so as to have more impact.  Think of “Lost Highway” and that chilling scene with the Mystery Man who confronts Bill Pullman at a party.  There’s that feeling that the characters are on the threshold of the Twilight Zone for most of the story and then briefly cross over, where something impossible happens and disarms them.

Admittedly, I think I’m praising David Lynch more than I am Tamaki, and I don’t know if that was her inspiration or not, but that’s the vibe I’m starting to get from this mini.

I suppose the real problem is that this is one of those miniseries that was written for the trade.  It’ll most assuredly read better all at once than across four months, mainly due to the drawn-out pacing.  Build-up is fine and a graphic novel can afford a writer the luxury of taking their time, but for those reading in chapters by the month, we’d kind of like a little more action per installment.  But hey, once this mini is over in two months, people will be reading it almost exclusively by trade, so the point’s kind of moot.

Tamaki’s dialogue goes for something approaching “realistic discourse” but she seems to struggle when it comes to mixing such execution with trite psychoanalysis.  Everyone April and Casey meets tries to tell them something deep and profound (probably because they’re all constructs of the Rat King, or so I’m guessing, and just messing with their heads).  While it occasionally comes out somewhat smoothly (the stranded mother), other times it’s just ponderous and labored (Sam at the men’s center).

Koh’s art is growing on me; it’s detailed when it needs to be and sparse the rest of the time.  She doesn’t resort to cheap short cuts like obvious cut ‘n paste or anything like that.  In this day and age, I’ve come to appreciate any artist who redraws a pose from scratch instead of ctrl-c ctrl-v-ing that shit like nobody’ll notice.

So far, Casey & April isn’t really exciting me, but I do think there’s something in here that I like (and not just the Rat King), even if I haven’t quite found it yet.  The story seems to be transitioning out of a vacuous romance plot and into something closer to a horror movie, which is right up my alley, so this mini may yet surprise me in the back end.

That said, well, it does feel like a “wait for the trade” kind of story.