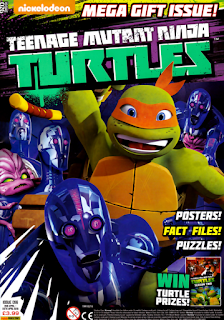 Down in Don’s lair, he has discovered a new form of extradimensional energy called “donatricity”.  Mikey, playing around in the lab, accidentally touches the conductor and his entire body is charged with the energy.  Suddenly, he becomes a super genius capable of stumping even Donatello. 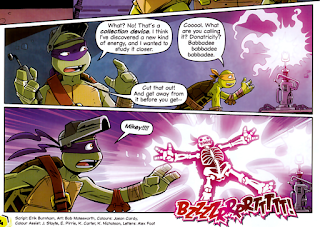 To demonstrate his new intellect, Mikey invites his brothers to a sparring session where he announces he’ll defeat them all by throwing a baseball.  They charge and he hurls the ball, calculating the trajectory so that it ricochets off each of them, taking them down.  Splinter is impressed with his son’s new skills, but fears he might be changing fundamentally as a person.  Mikey doesn’t have time for lectures, as he needs Don to help him build his latest invention. 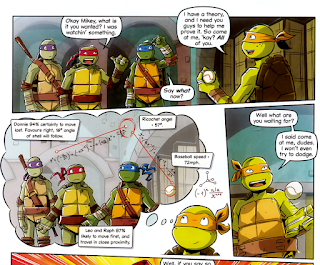 Later, Mikey leads his brothers on a raiding mission against the Kraang, using his new spectrographic analyzer helmet to track their whereabouts to an unassuming ice cream parlor.  By now, all the other Turtles are stifled by Mikey’s new take-charge attitude, but they follow regardless.

Storming the base, they find that the Kraang actually discovered “donatricity” first in a one-in-a-million fluke involving their dimensional portal.  Mikey fears what might happen if the Kraang all become super geniuses like himself and comes up with a plan to destroy their data on “donatricity”.  Unfortunately, the Kraang blast their computer terminal, leaving Mikey no other way to eliminate their access to “donatricity” than to destroy the conductor.  He uses his nunchakus to interrupt the energy flow and takes a huge blast of “donatricity”, knocking him unconscious. 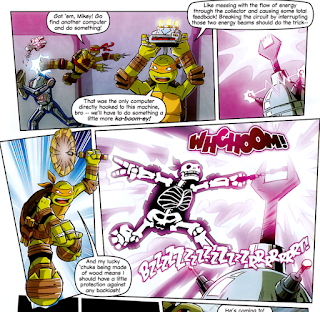 When Mikey awakens back in the lair, he finds that his super intellect is gone.  Donnie is pleased to be “the smart one” again, though Mikey isn’t quite so happy.  Splinter reminds him that intellect isn’t everything, and that Mikey’s unique perspective was far more valuable to the team and who he is inside.  Mikey interprets this as “you don’t have to clean your room”.

This was sort of a stock standard episodic story; we’ve all probably seen it before in other cartoons.  The template works fine with the TMNT characters applied to it and all, but I doubt there’s anyone who hadn’t paced the story out in their head from page 1.

Mikey actually doesn’t get TOO uppity when he becomes a genius and retains most of his exuberance and kindness.  He just sort of steps on everybody’s toes, absentmindedly robbing his brothers of their unique traits (being the smartest, being the best fighter, being the leader).  In that regard, Burnham reworks the tired formula a bit to make it less obnoxious; usually in these sorts of situations, characters become complete jerks when gifted with unanticipated intelligence (storytellers often equating brains with assholes, for some reason).

Not much else to say about the story (though I liked Mikey's thought-bubble equation!).  But boy, there were a lot of colorists on this one (looked fine, though).