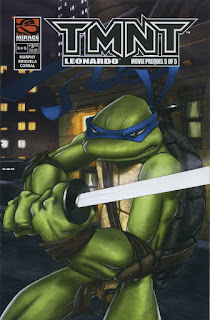 In Costa Rica, Colonel Santino prepares to chop down some rain forest because the Bible says it’s okay.  That’s when the Ghost of the Jungle (Leonardo) beats him and his militia up.  Leo gives a speech that the rain forest does not belong to man, but to the world… the community…

The past.  As Splinter prepares Leo for his global pilgrimage, he leaves him with a riddle “The five-fold path shall lead you to the one”.  Leo doesn’t know what that means, but hopes to figure it out along the way. 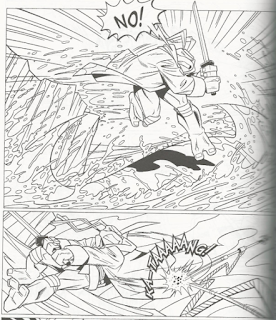 Path Five (Courage).  Iceland.  A whaling vessel is about to harpoon an endangered fin whale.  Leo leaps from an iceberg and deflects the harpoon with his sword.  He then destroys the harpoon gun with shuriken and tells the whalers to take a closer look at their prey.  A baby fin whale then breaches alongside the adult; had they killed the adult, the baby would have been orphaned. 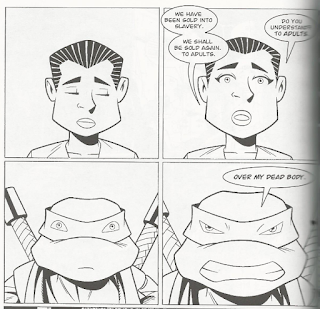 Path Four (Compassion).  Portugal.  Leo stows away on a Moroccan freighter headed to Liverpool.  In the cargo hold he finds numerous African and Middle Eastern children who are to be sold into sex slavery in England.  They confuse him for Enugu, the Turtle God.  Leo slaughters every human being on the freighter and calls the cops to pick up the children. 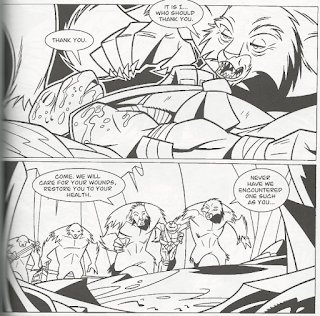 Path Three (Selflessness).  Mongolia.  In the mountains, a poacher and his crew capture a yeti and prepare to take it back home for fame and fortune.  Leo approaches them and offers to take the yeti’s place.  The poachers beat him up and decide two cryptid specimens will make them twice as rich.  Suddenly, a tribe of yetis attack and chase off the poachers.  The yetis, who are intelligent, thank Leo for helping them and offer to nurse him back to health.

Path Two (Humility).  Japan.  Leo goes before the Ninja Tribunal and the Ancient One, saying that he is the best of his brothers and that he is ready to receive the same training that Hamato Yoshi did.  The Ancient One scoffs at his arrogance, mocks him with childish names and then soundly beats him in battle.  The Tribunal turn their backs to Leo and say that by forsaking his family, he has learned nothing; he cannot finish the five-fold path alone. 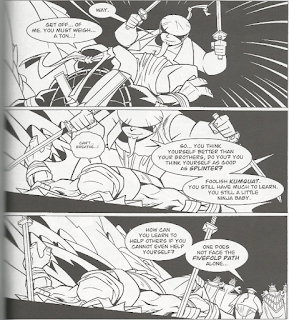 Path One (Community).  Costa Rica.  Having dealt with Colonel Santino, Leo receives a surprise visit from April.  Leo tells her that he cannot return to New York after what he’s seen.  He feels that humanity is awful, beyond hope and he doesn’t want to live among them (or beneath them) anymore.  April suggests he look at what he’s learned from a different angle.

Later, Leo thinks about what Splinter said: “The five-fold path shall lead you to the one.”  He realizes that “the one” is family and he must go home and be with them.

*Leo was sent on his pilgrimage in TMNT Movie Prequel #1 – Raphael.

*The yeti are not among the Thirteen Monsters as seen in the TMNT feature film or the comic adaptation.  However, in the junior novelization “The Legend of Yaotl”, a yeti is identified as one of the Thirteen.

*The Ninja Tribunal and the Ancient One originate from the 4Kids TMNT animated series, appearing throughout seasons 4 and 5.

*This issue was reprinted in TMNT Comic #8, TMNT Comic #9, TMNT Comic #10 and TMNT Comic #11.  The blood from Leonardo's massacre of the child slavers was removed entirely so as to make it look like he was only knocking them out.

Yeah, this was a Steve Murphy comic through and through.  Leo travels the globe, saving the whales, fighting deforestation and thwarting poachers.  All it needed was a “just say NO” message about drugs and this would have been the ultimate ‘90s comic… that happened to be published in 2007.

The art by Dario Brizuela makes the story more exciting than the script deserves, but that seems to be a theme with Brizuela's Mirage work.  Leo’s globetrotting adventures are a little rushed, but with five chapters and a bookending sequence, there’s only so much space.

The lessons he learns on each leg of the path are pretty ham-fisted, but they get the message across for the most part.  Some are positively gag-inducing (protecting the rain forest for the “global community”), but they aren’t too ponderous.

I think the lone exception is the Path of Compassion.  Now, let’s make it clear that I’ve no love for sex traffickers and pedophiles, but does THIS look like a picture of someone who has mastered the concept of compassion?

Yeah, Leo saves those kids… by ruthlessly slaughtering dozens of other people.  Horrible, horrible people, but people nevertheless.  I’d think a stronger lesson in “compassion” might have involved sparing their wretched lives so that maybe they can learn the error of their ways in prison.  But evidently “compassion” in Steve Murphy’s dictionary means “capital punishment”.

The presence of the 4Kids TMNT characters is a little weird, but I suppose no weirder than the Triceratons showing up in the first issue.  I wouldn’t immediately jump to the conclusion that the TMNT film takes place in the continuity of the 2003 cartoon; it was more likely just another author pulling ideas and characters from all over the TMNT mythos.  At least the Ancient One wasn’t featured long enough to regale us with his hilarious fart jokes.

The Leonardo installment in the Movie Prequel miniseries isn’t too bad, if just for the really nice artwork.  It only suffers in how patronizing much of the story is (“save the whales”, “save the rain forest”, "the Bible can be interpreted to justify atrocities", “think of the children”, “poaching is evil”, “family is the most important thing of all”, “humans are the REAL monsters”) and for a very skewed definition of “compassion”.  The bright side is that I’m one step closer to being done with this series.

Grade: D+ (as in, “Dario Brizuela is a great artist who unfortunately got saddled with the WORST scripts by Mirage”.)