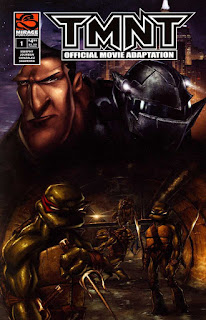 Three thousand years ago.  A great conqueror named Yaotl and his Four Generals, seeking immortality, open up a gateway in Costa Rica utilizing the Stars of Kikin.  Their plan backfires, unleashing Thirteen Monsters upon the Earth, transforming the Four Generals to stone and cursing Yaotl with immortality. 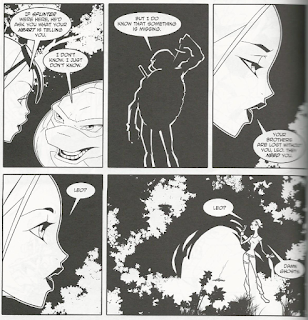 The present.  Costa Rica.  After taking care of the cruel Colonel Santino, Leonardo’s global pilgrimage is interrupted by April, who came to Costa Rica to find a statue for a millionaire and stumbled upon the “Ghost of the Jungle”.  Leo asks how his brothers are doing without him and April replies with bad news: Donatello is working tech support, Michelangelo is doing kids’ birthdays as “Cowabunga Carl” and Raphael is mostly absent (masquerading as the vigilante Nightwatcher, unknown to them).  April asks Leo to come home, but Leo doesn’t feel he’s ready.

In the lair, Don, Mike and Raph are watching a news report on the Nightwatcher.  Mike gets wistful for the old days when THEY fought crime, Don thinks the Nightwatcher is a dangerous rogue and Raph is glad that SOMEONE is cleaning up the city.  They start to fight and Splinter breaks them up, worrying about what has become of their family. 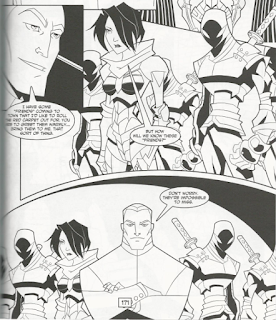 At Winterscorp, April and Casey deliver the statue of General Aguila to Max Winters, the millionaire who sent April to Costa Rica for it (along the way, Casey accidentally trips an alarm, causing a security lockdown).  Winters thanks April for reuniting him with all four lost members of his “family” and lets the pair leave.  As soon as they leave, Karai and several Foot Soldiers step out of the shadows.  Winters has a job for them, having contracted their services: They’re to meet some “friends” of his and bring them to him.

Later that night, Casey goes on a vigilante stroll and spots the Nightwatcher.  He calls Raph out, having deduced his identity.  They have a talk and Raph says that he got sick of fighting Triceratons and Utroms while the innocent people of New York are preyed upon by criminals.  He took on the Nightwatcher identity to keep his family from knowing, since they were forbidden from interfering with the world of men while Leo was gone.

Meanwhile, as Leo hang-glides back into town, Max Winters revives the Four Generals thanks to the Stars of Kikin beginning to align. 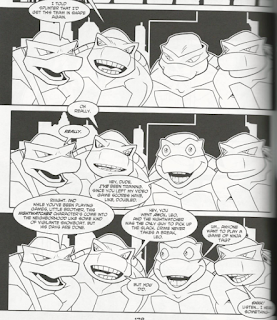 Leo is greeted by Splinter, who is happy to have his son back, but warns him that until he and his brothers can act as one, they cannot fight.  The Turtles go to the rooftops to train when they spot Karai and the Foot battling Bigfoot in a construction zone.  They try to help, only for Karai to attack Leo and then retreat (Leo had hoped that with the Shredder dead, their antagonism might have ceased).  Bigfoot throttles the Turtles until General Mono arrives and trashes the beast.  The Turtles are forced to retreat when they hear police sirens.

At Winterscorp, Karai is upset about the interference of the Four Generals and the TMNT.  Max Winters tells her that they are to work together and like it, as there is little time before the portal opens.

The next morning, Splinter hears about what happened on the news and once again orders his sons to stay out of action.  Over the next few days, the Four Generals and the Foot Clan capture several of the remaining monsters unopposed.

As night falls, Raph and Casey stumble upon the bad guys capturing the Vampire Succubor.  They’re pursued by General Gato, who tags Raph with a weird tranquilizer dart before being forced to flee when the police arrive.  At April’s apartment, Raph recovers and they all have a good look at the Aztec dart.  Casey tells April that the one who shot Raph was one of the statues she collected.  April recounts the Legend of the Yaotl and figures Max Winters is the immortal conqueror.  Raph wants to take the fight to Winters, but Leo reminds him of Splinter’s decree and Raph storms off in a huff.

At Winterscorp, General Serpiente brings the eleventh monster.  However, General Aguila fears that Winters plans to undo their stone immortality and orders the other generals not to find the thirteenth monster. 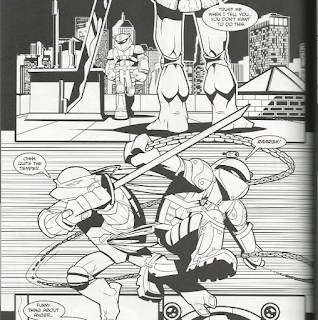 At a diner, Raphael (as Nightwatcher) does battle with the miniscule Jersey Devil and drives it off.  He’s called out by Leo, who orders the “Nightwatcher” to quit being a vigilante “or else”.  The two fight and Leo learns that the Nightwacther is Raph (shock!).  Raph says he’s sick of Leo bossing him around and beats him up.  After Raph storms off, though, the Generals tranq and capture Leo.  Raph returns too late to save him.

Raph brings the bad news back to the lair.  Splinter says that they must reveal themselves at last and take the fight to the enemy.  The Turtles, Splinter, April and Casey storm Winterscorp and fight their way through Karai and the Foot.  Inside, Max Winters is shocked to find that the portal is malfunctioning.  The Generals betray him, revealing that the thirteenth monster (Leo) is a fake. 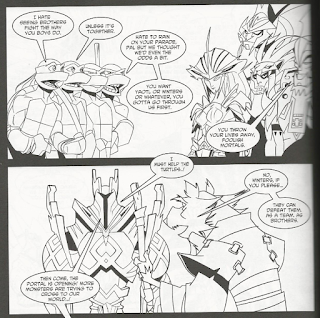 The good guys make it inside and Casey trips the lockdown alarm, trapping the Foot outside.  Raph frees Leo and gives him his swords, making amends.  Winters reveals that he’s trying to send the monsters back to their dimension and teams up with the Turtles.  He orders Karai and the Foot to find the last monster, with April and Casey tagging along.

The Turtles fight the Generals while Splinter and Winters keep more monsters from escaping through the malfunctioning portal (which will only let things out, not in, until the thirteenth monster is found).  The Foot, April and Casey return with the last monster (the Sea Monster) and force it through the portal.  The Four Generals are sucked inside, the breach seals and Winters is freed of his immortality.  Winters thanks the Turtles and April before decaying into dust.  Karai warns the TMNT that a “familiar face from the past” will be returning and the Foot leave. 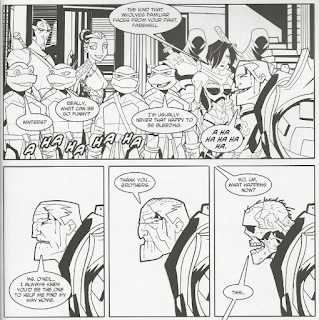 Down in the lair, Splinter places Winters’ Yaotl helmet in the trophy room along with Mikey’s Cowabunga Carl mask.  The Turtles then race into the city together as a team.

*This story is continued from TMNT Movie Prequel #5 – Leonardo.

So yeah, man, there’s just way too much shit going on for one story, here.  Leo’s doubting himself, the family’s broken up, monsters are on the loose, the Foot Clan are there for some reason, stone generals and immortal businessmen, a dimensional portal, Raph’s a vigilante, what the FUCK.

It was hard enough to keep track of all this stuff in a movie, but in a watered-down comic book adaptation the pace is practically incomprehensible.

At the risk of critiquing the movie (I want to save that for a review of the film), the story feels like Munroe took six different scripts and tried to combine them all into one.  There is just WAY too much going on and as a result, nearly every plot line gets shortchanged.

Murphy does his best to try and condense things, though as I said, condensing is NOT what this story needed; it needed to be EXPANDED to make room for all the plot lines.  The prequel comics try to make sense of everything and do an okay job of at least reducing the What-the-Fuck Factor, but they don’t really do enough.

If anything, instead of getting five prequels and an adaptation, it would have been better had the movie-itself been decompressed across six issues in order to give every plot thread its due.  The prequel comics end up either adding nothing or uneconomically retreading ground (April’s conversation with Leo is seen across THREE issues in this series).  The whole thing was very poorly plotted and executed; it just feels rushed and ill-conceived.

Now, let me say upfront that I think Diego Jourdan is a great artist.  His work on Tales of the TMNT is good stuff!  But this… is not his best work.

I’m not sure what his lead time for this adaptation was, but it seems clear it wasn’t enough to reasonably complete a 62-page graphic novel.  He has to resort to a lot of shortcuts, mostly in the realm of copy-paste, and it shows quite a bit.  The characters shine when Jourdan breaks model from the Imagi style guide and gives them a bit more cartoonish energy, but those panels are few and far between.

This comic looks ROUGH.  There are lettering fuck ups, too, with sentences being repeated, missing words and conspicuously empty text boxes that should probably have sentences in them.

Ultimately, this whole series based on the 2007 film is a bad example of Mirage trying to synergize with one of their mainstream TMNT offshoots.  They fail on a remarkable level, producing comics based on a children’s movie but primarily unsuitable for kids (lots of gore, swearing and a weird moment an issue ago with a child sex ring).  The quality control is lousy and the end results look quick and dirty.  These are bad comics.

Grade: D- (as in, “Diego Jourdan, another good artist that Mirage unfortunately saddled with a lot of their lesser scripts”.)