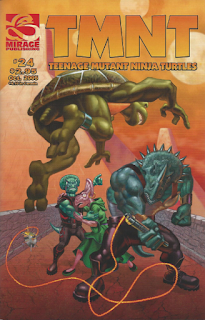 On the streets of New York, the “Dark Lord Yorga Mol” (actually George) gathers his goth vampire friends and they go on the hunt for fresh blood.  They find a homeless man sitting on a bench and attack him, but it turns out to be Casey Jones in disguise. 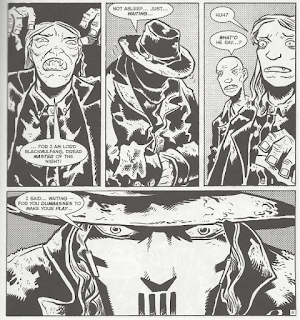 Casey begins beating them up and the ones who flee in terror are caught by the mutated Raphael.  The final straggler is taken down by Donatello in his new robot body.  Finished, Don radios the Fugitoid to pick up their captives in a hovercraft. 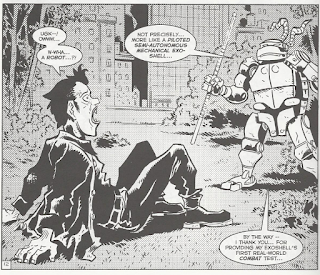 On the Styracodon Homeworld, Michelangelo and the other prisoners are let out into the yard for the day.  While Azokk tells Mikey how he wound up in prison, Mikey notices Seri, the Regenta, being escorted along the perimeter wall by several guards.  Mikey scales the wall and calls out to her, hoping she will get him sprung.  Seri merely looks away from him in disgust.  The Styracodon guards then clobber Mikey and laugh, telling him that no one named “Seri” is there and that the girl is most certainly not the Regenta.  Mikey is thrown back into the yard, beaten and confused. 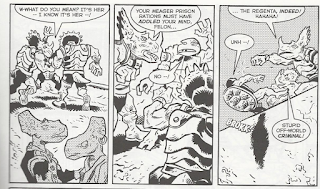 Down in the lair, Leonardo gets off the phone with the Utrom Glakon, who still cannot locate Michelangelo.  To take his mind off his worries, Leo continues his research on the mysterious warriors who have been attacking the Foot Clan.  He works his way through Master Splinter’s library and finds a secret panel.  Behind it are documents written in a mystical script Splinter taught him years ago.  One page references something called the “Battle Nexus”.  Another page includes a drawing of the macquahuitl sword wielded by Three Moon Jaguar.  Leo figures he’s on the right track. 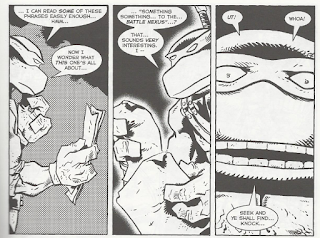 On the backroads of Northampton, Shadow is going for a bike ride when she’s passed by a bunch of drunken rednecks in a Jeep.  She sees Jay among them, but he doesn’t recognize her with her helmet on.  She decides to follow them in secret, worried about the company Jay is keeping.  She tracks Jay to a compound in the woods populated by other rednecks.  Jay takes a spraycan and makes a banner for the Xihad, the terrorist organization that blew up an Utrom communications building some while back (which nearly got April killed). 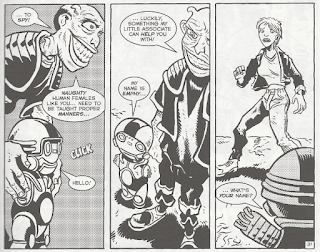 Suddenly, Shadow is accosted by the strange smiling alien.  He admonishes her for spying and releases a tiny robot named Emphy the Guardifriend to punish her.  The cute robot begins menacingly waddling her way.

*According to Laird in the letters page, regarding whether Volume 4 will ever be concluded or not, he said, “I can pretty much guarantee you that there will be no ‘rush job to conclude the story’ – it’s actually more likely that it will NEVER be concluded and people will have to use their imaginations.  But I do hope to someday wrap up all of the plot lines that I have started in Vol. 4.”

*This issue also included a bonus pin-up, Leonardo vs. the Shredder with lightsabers by Peter Laird.

Now this is more like it!  A lot of stuff happened in this issue with nearly every character arc that had been stagnating actually moving forward.  Man, what took so long?

Raph is apparently done feeling sorry for himself and the vampires come back into play.  Maybe we’ll find out why their bite mutated him, maybe we won’t.  I can’t remember.  I’m just glad Raph is doing something other than lounging around the lair, making small talk with his brothers.

And Casey’s return to the vigilante antics wasn’t some brief relapse, either, as he continues to look for trouble (though he’s channeling it with a bit more strategy than in the old days).  Good to see that unlike April taking on the identity of Nobody for 2 minutes, Casey putting the mask back on wasn't just some flippant little moment of melodrama.

Also yeah, he seems to be much more mature about picking fights than in the past (wearing chainmail around his neck, working with his friends in a coordinated ambush, etc.), so it actually keeps him from regressing as a character.  He’s put the mask back on, sure, but he hasn’t forgotten all the things he’s learned through his retirement and growth over the years.

Oh and Don’s a robot.  Man, that happens to him a lot, doesn’t it?  The Image series turned him into a cyborg, the Mirage series shrunk him down and turned him into the tiny pilot of a robot body, and recently the IDW series has placed his consciousness in the body of Metalhead.

That Turtle just can’t stay a turtle for very long.

Mikey’s storyline is getting more intriguing, too.  Once again, my memories are failing me and I can’t recall if we ever learn what the deal is with “Seri”.  Was the female Styracodon at the prison the same one whom Mikey romanced or just someone who happened to look like her?  Was her look of disgust indicative of some malice toward Mikey or disgust with herself?  If “Seri” wasn’t really the Regenta, then was she some sort of imposter?  And why?

So many questions.  I guess if we’d gotten the answers by now, I’d have remembered.  But shit, this issue came out ten years ago!

Hey, Leo’s finally stopped lounging around the lair with a mouthful of Indian food and is back on The Case of the Al Gore Aliens.  His arc was really fascinating when it started, but sort of came to a complete stop for several issues.  I’m glad to see it picked back up, though I CAN tell you with certainty that we still don’t know what the fuck is going on.  That much I remember.

With this issue, the Mirage book begins synergizing with the 4Kids cartoon, as the Battle Nexus is hinted at (and will soon be seen).  I want to talk about that, but maybe I should wait until it’s properly introduced in an issue or two.  But in regards to synergy, Leo says “what the shell” this issue.  I’d almost forgotten how much the 4Kids TMNT said that phrase.  Evidently, I forget a lot of things.

And lastly, Shadow gets back into relevance this issue, as does the smiling alien and the Xihad.  I still think the whole Xihad thing is dumb (not in concept but in execution), but I went on about that several reviews ago and I’d rather not repeat myself.  Shadow’s new arc kinda feels like it’s fighting over scraps; all the little odds and ends from earlier in the book that had drifted off the map.  Jay is back after being gone for over ten issues, the Xihad are relevant again, the smiling alien dude we’d all probably forgotten about shows up, Shadow gets to do something (ANYTHING)… Basically, it’s the leftovers.

Still, hey, something is happening in this comic.  And it’s been a while since we’ve been able to say that about Volume 4.