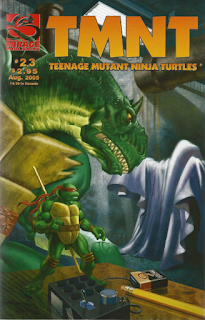 Down in Donatello’s lab, the mutated Raphael is helping his 6-inch brother with a new project.  Donatello isn’t sure how long he’ll be stuck at his current size, so he dusts off the SAL-4000 aiddroid he and his brothers picked up on their second trip to D’Hoonib.  He hopes to outfit it into a substitute body (with Raph’s help).  Just then, Leonardo returns to the lair with some Indian food. 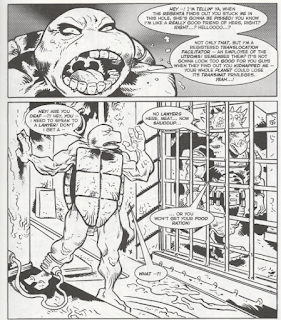 In the prison on the Styracodon homeworld, Michelangelo is screaming bloody murder at the guards to set him free.  Azokk warns him to be quiet, lest he lose his one food ration for the day.  Mikey is inevitably silenced by another prisoner, who throws feces in his face.  Mikey doesn’t understand how a “civilized” planet like the Styracodon homeworld could have a prison like this, but Azokk informs him that even the most advanced cultures have places such as this.  Azokk reveals he's been stuck in the place for 35 years. 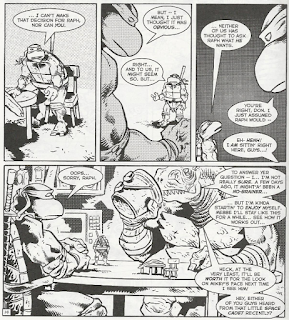 Back in the lair, Donatello tells his brothers how Glyminal and the Venezuelan Utroms have been sharing the technology they developed with the other Utroms on the Moon Island.  Leo hopes that with all their brainstorming, the Utroms can find a way to turn Don and Raph back to normal.  Don would love to be himself again, though Raph isn’t so sure.  He’s beginning to enjoy being a giant monster. 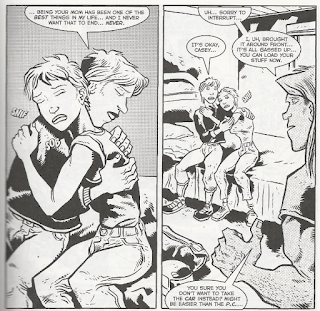 At April’s apartment, she’s packing her things and getting ready for her road trip.  She bids farewell to Shadow, who tearfully thanks her for being such a good mom.  With Casey’s help, April packs up the Honda P.C. (with luxurious trunk space!), making sure to take the Ooty the Utrom doll Mikey gave her when she was sick.  April says one final goodbye to Casey and Shadow, then drives off to “find herself”.

*The events of Tales of the TMNT (Vol. 2) #60 take place between this and next issue.

*The Turtles’ second trip to D’Hoonib, where they got the SAL-4000 robot, is described as an Untold Tale of the TMNT.  The Turtles DID make a return trip to D’Hoonib in Tales of the TMNT (Vol. 2) #54, although that story takes place after Splinter was out of the picture, and Don says Splinter was still living in the lair when he returned with the SAL-4000 robot, meaning Raph couldn’t have been referring to those events.

*Mikey gave April the Ooty the Utrom plushie while she was sick in TMNT (Vol. 4) #10.

Well, we’re back to the ongoing story once again.  Or what passes for it in Volume 4, anyway.  Not a whole lot really happens in this installment; in fact, I’d say it’s the most incremental chapter in the whole series so far.  I suppose after dropping the narrative bombshell of April’s origin last issue, Laird wanted to re-acclimate the readers in baby steps.

Whatever the motive, I could have probably summarized the issue in four sentences instead of four paragraphs.  “Donatello is building a robot body.  Mikey’s still stuck in jail.  April is leaving.”

Aw shit, that was three sentences.

Breaking down the storylines, let’s start with Don and Raph.  Don is building a robot body, but he isn’t really going to do anything with it, so absolutely none of this will matter in the long run.  It’s just killing time.  Raph is considering staying as Gameraph because he kind of likes it.  But that won’t last either, so his apprehensions won’t amount to anything.

As for Leo, well, he’s eatin’ Indian food.  Truly, he has suffered the most, this issue.

Mikey’s stay in space jail is still interesting, even if it got the shortest focus in this issue.  I know we’re kinda spinning our wheels here, but at this leg of Volume 4, Mikey’s arc really is the most exciting and it’ll gear up in time.  It’s just, man, we get 10 pages this issue dedicated to Donnie skittering around the lair and babbling about obvious shit in the most ponderous way possible, while the INTERESTING story, Mikey’s story, is relegated to a 3-page afterthought.  It just seems like the priorities are way off in this comic.

And yeah, in case you hadn’t connected the dots yet, the Styracodon space jail is Laird’s commentary on Guantanamo Bay.  The analogy was subtle in the past and I was actually rather impressed that Laird showed the restraint not to just openly spell out “this is what I’m going for” and – Whoops.  There it is.  Ah well, he tried.

April’s tearful goodbye to Casey and Shadow was sort of the highlight of the issue, as it offered a real reconciliation between April and her step-daughter.  Shadow actually calls April mom, for the first time I think, and it does feel like a solid moment between the two.  We hardly ever got to see much of April doting over Shadow in a motherly fashion; not in Volume 2, not in the “Mirage Volume 3” issues, and scarcely at all during Volume 4.

Whether intentional or not, the relationship between April and Shadow always seemed distant.  Did April accept Shadow as her daughter even though they weren’t related?  Likewise, did Shadow accept April as her mother?  I mean, there were stories written to show April’s concern for Shadow’s wellbeing, because April is a good person, and certainly she cares about Shadow, but a mother-daughter bond always seemed conspicuously absent.

So their coming to terms with one another, as mother and daughter, did feel like a big moment in the series.  I think this just goes to show what I said way back in my review of TMNT (Vol. 4) #1.  There are parts of this series that I think are absolutely awful, but then there are parts, such as this reconciliation between April and Shadow, that stand out as one of the best moments in the whole series.  Is Volume 4 more bad than good?  Well, subjectively speaking, I kind of think it is, but the good moments certainly shine brightly.

But then Laird does his level best to ruin everything by awkwardly shilling for Honda. 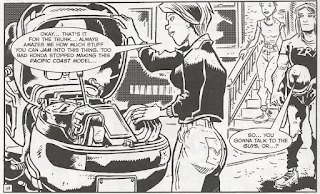 Anyway, before I get too mushy, let’s talk about this issue’s letters column.  It’s hilarious.  For whatever reason, Laird dedicated 9 pages to responding to letters, but the hilarity comes from the contradictions between his different responses.

Okay, so one guy writes in to criticize the comic.  Laird offers a 3-paragraph rebuttal, “…If any reader hasn’t figured out that it is HIGHLY unlikely that I am going to change the way I am doing things with this book, this should be their wake-up call.  After 23 issues, it should be obvious.  If… reading Vol. 4 is a hideously painful experience for you, please wake up, wise up and stop doing it.”

Two pages over, another guy writes in to ask how Volume 4 is doing financially.  Laird replies, “Without getting into specific numbers, this Vol. 4 series – with the possible exception of issue 1; I’d have to double-check that – has never made a profit.  Print run numbers have gradually fallen into the 4,000 copies per issue area.  With our page rates and printer’s costs, the book loses money with each issue.”

So… yeah.  In one breath, Laird tells his customers to stop buying his book, and in a second breath, he whines about how the book isn’t making a profit.  It’s uncanny.

Also in this letters column, Laird goes on a rant about how George Lucas destroyed the integrity of the Star Wars Trilogy by producing the Special Editions and the Prequels.  Laird then tells readers where to go on the ninjaturtles.com website to purchase the PBBZ reprint of TMNT (Vol. 1) #1… Laird’s own personal “special edition” of TMNT #1, featuring completely redone, digitally enhanced inking, toning, lettering and also some script updates (including a moment where the baby TMNT shill for Moto Guzzi.  I’m serious).

I mean, jeez.  I’m sure that after 7 years and nearly a thousand posts, I’ve contradicted myself a dozen times over.  We all do it.  But to such an extreme?

Anyway, this issue is a serious bore, but it stands out to me thanks to a wonderful moment between April and Shadow that sort of addressed the elephant in the room.  While the other plot lines were left twiddling their thumbs, that was a genuinely great scene (except for the bullshit Honda commercial) and saves this chapter from being a total waste.