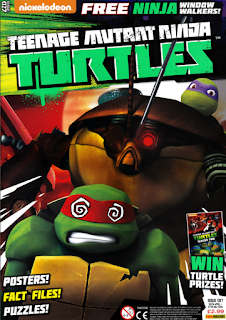 Having just finished dinner at Murakami’s, the Turtles, April and Casey race across the rooftops on their nightly patrol.  Donatello and Casey, both infatuated with April, try to protect her from minor hazards along the way, only succeeding at getting on her nerves. 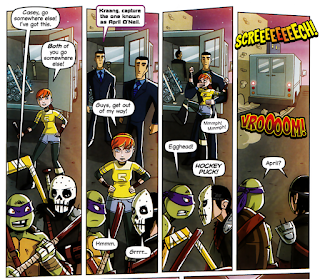 Suddenly, April’s telepathy picks up the Kraang and she guides everyone to a van being loaded with mutagen by Kraangdroids.  Donnie thinks he could make enough retro-mutagen with the payload to restore a number of mutants and the Turtles attack.  April tries to attack, too, but Donnie and Casey continue to get in her way in their efforts to protect and impress her.

In the chaos, April is captured by the Kraang, who load her into the van and drive away.  April gets free and prepares to take down the drivers, when Donnie and Casey again interfere by trying to rescue her.  They end up fighting with each other and Leo winds up saving April. 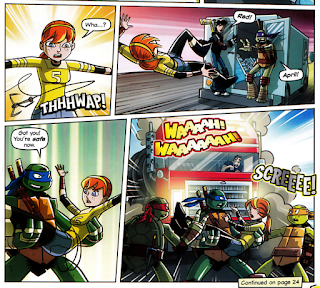 The van continues onward with Donnie and Casey in the back, arriving at the Kraang base.  Donnie and Casey are surrounded by Kraangdroids, leaving the Turtles and April to rescue them.  April climbs to a rooftop to take down some Kraang snipers, but the two rivals see her and distract themselves by trying to call out to her.  They only succeed in warning the two Kraang snipers, who send April tumbling over the ledge.

She lands in a dumpster full of bubblewrap and survives, only to be accosted by the Purple Dragons.  The Dragons want to take her to the Shredder for a reward, but April has a better proposition.  She suggests they steal the van full of mutagen, as Shredder will surely reward them more for that.  Then, while the Dragons and the Kraang battle over the mutagen, April sneaks in and whisks Donnie and Casey out of the chaos. 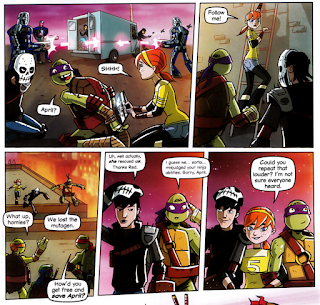 Later, Donnie and Casey apologize to April for underestimating her ninja skills.

The April/Casey/Donatello love triangle is one of the many ongoing plot lines in the Nickelodeon cartoon that shouldn’t be going on anymore.  They had a chance to resolve it near the start of season 3, but the writers instead opted to prolong it even further.  Now we’re stuck with that shit, a season after it began to overstay its welcome.

“April’s Fools” draws from this dry well for its primary plot and you can guess how well that works out for the story.  Donnie and Casey are misguided in their chauvinistic attempts to both protect April and impress her with their competing masculinity.  It’s really hackneyed and out of character, even for those two.

And in regards to April, I think we’ve had enough “April proves her skills as a warrior” stories to get the message across that she doesn’t need protection.  This is just laboring the point.

There are other, smaller problems with the story beyond the annoying plot.  Alex Foot messes up some lettering, so Donatello calls Casey an “egghead” and Casey calls Donatello a “hockey puck”.  Because that makes sense.

Also, why would the Shredder want mutagen stolen from the Kraang?  At this point in the series, the Foot and the Kraang were allied and the Shredder was receiving all the mutagen he could ever want for Stockman’s experiments.  Perhaps the Purple Dragons were just stupid and this was intended to emphasize it?  I think, more likely, the writer didn’t do enough research.

Iain Buchanan’s art is stiffer than usual with this installment, too, and much of the action and character expressions feel static.  Altogether, not a particularly good installment in the series.