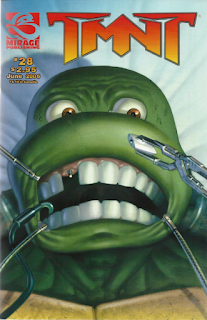 2:00pm in the small town of Swelfield.  Everyone is going about their daily lives when they suddenly vanish into thin air.  Twenty minutes later, they reappear, lined up neatly in the streets.  The residents awaken with no idea what happened. 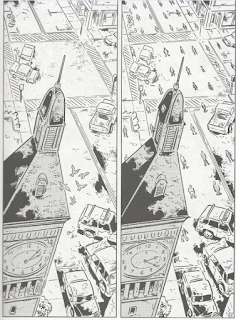 In the Battle Nexus, Leonardo and the Shredder continue battling the mutated deer-creature.  Leo ends the fight by slicing off its head and the six warriors whom he faced earlier compliment his skill.  They tell him that the beast was a mogrithene, a creature that is mutated when it drinks the waters of passage and is drawn to attack the one who used those waters (Leo).  The warriors leave and Jorut tells Leo that they are called Challacha: Warriors who roam the Battle Nexus seeking informal, non-mortal combat with other warriors.

Leo is less concerned with them and more concerned with the presence of the Shredder.  Jorut doesn’t understand Leo’s contempt for the armored warrior, who removes his helmet and reveals himself to be the quite-friendly Oroku Yoshi.  Leo is confused. 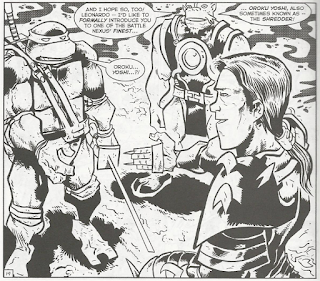 Michelangelo finishes up his dental surgery onboard the Triceraton Combat Cruiser, the Kaitoxa.  With his new teeth in place, he heads to the command center to speak with Commander T’Zirk.  T’Zirk tells Mike that they’re headed back to the Triceraton Homeworlds, as the Prime Leader would like to speak to the Turtle.  Mikey figures that Zanramon has a score to settle with him, but T’Zirk explains that Zanramon was booted out of office shortly after the Turtles had their historic battle with the Triceraton All-Stars in the Tri-Sports Arena.  Evidently, the death of the All-Stars was a major blow to their military forces and Zanramon fronted much of the blame for that fiasco.

T’Zirk also thanks Mikey for informing him about Azokk’s death, though he won’t open up as to what exactly Azokk was doing in the Styracodon prison.  Mikey is surprised at how reasonable the Triceratons are acting, given their history.  T’Zirk says that they aren’t all brutes and are a highly advanced civilization.  He laments that the Utroms and their secret police, the Utrom Secreti, have spent years trying to hold them back by preventing them from developing transmat technology on their own.  The Utrom Secreti evidently disguise themselves with Triceraton exo-suits and sabotage their labs and assassinate their scientists. 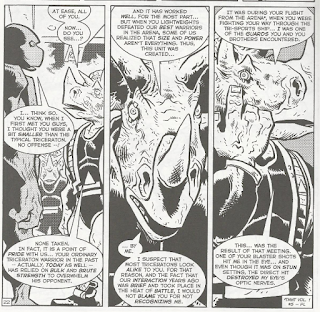 Even more surprising, Mikey learns that he and his brothers became celebrities among the Triceratons after their battle in the arena, even getting an animated holo-series called “Savage Shelliens”.  T’Zirk and his commandos adapted a new martial arts style from watching footage of the Turtles, called “T’Jat Uhasil”, or “Soft Kill”.  It favors smaller size and quicker strikes over brute strength. 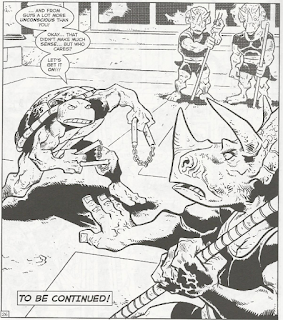 As it happens, T’Zirk was a guard ordered to retake the Fugitoid and lost his eye while fighting the Turtles.  Rather than hold a grudge, he was impressed enough by their skill to adapt their abilities to his race.  He takes Mikey to the training room and introduces him to the other commandos.  A young commando, Zong, refuses to believe that the scrawny Turtle is one of the famed warriors who brought down the All-Stars.  Through with being pushed around, Mikey grabs some nunchakus from off the racks and challenges Zong to a sparring match.

*The Turtles fought the Triceraton All-Stars in the Tri-Sports Arena in TMNT (Vol. 1) #6.  The editor’s note mistakenly lists the issue as TMNT #5.

*More on the Utrom Secreti can be seen in the short back-up strip, “Apocalypse Vow” and its sequels.

*This was the last issue of Volume 4 to be sold direct-to-market and distributed via Diamond.

For a lot of fans, this was the last issue of TMNT Volume 4.  From this point forward, Volume 4 would no longer be sold in comic shops, but instead only be made available directly from the Mirage website or a related outlet (such as Steve Lavigne’s Facebook page).  This also began the “Ultimate Hiatus” for Volume 4, where the book would be published incredibly infrequently; sometimes as long as five years between installments.

Following Volume 4 from here on out hasn’t been easy.  You have to forever keep your ear to the ground, lest you miss the brief window of opportunity to purchase a new issue (only 1000 copies would be produced of each subsequent installment).  That means stalking the Mirage website, checking out Laird’s TMNT blog every month, subscribing to Steve Lavigne’s Facebook page or just eternally hanging out at TMNT forums in the hopes that somebody else will notice and alert you as to when a new Volume 4 issue becomes available.

So you can understand why this is “the last issue” for a lot of people.  I continue to see eBay listings of “TMNT Volume 4 Complete Run” that end at #28.  And I don’t blame them.  Following the series after this is not a leisurely affair.

Exactly what led Laird to put the series on indefinite hiatus following this issue, I don’t know, though I’ve read it was mostly “burnout”.  He was overseeing every aspect of the brand through the 2000s, from the cartoon to the toyline to the comics to the CG movie, and I think this is about when he finally broke.  Something had to give, so he cut the comic loose, apparently.

Though even after he sold his stake in the TMNT to the Viacom corporation in 2009, it’s not like new issues of Volume 4 suddenly began flowing like wine.  I think we’ve gotten one or two since then.  Perhaps he’s just lost interest with the Ninja Turtles, or at least with finishing this storyline.  But I’m no mind-reader.

Whatever the case may be, this particular issue initiates several new storylines, which is more than a little frustrating, considering it’s so close to “the end” of the series, or what we have so far, that none of these new ideas are ever explored while the older ones are never resolved.

As for Leo and Oroku Yoshi, we don’t learn too much on that end, either.  It’s a fight scene, a sort of stupid one, and I guess Oroku Yoshi is an alternate universe version of Oroku Saki/Hamato Yoshi.  That much is obvious, since it’s the Battle Nexus and all, but any specifics will be glossed over.  He’s drawn in the style of the 4Kids animated series Shredder, which made for an okay fake-out for readers between issues (left you thinking Mirage Leo was about to fight 4Kids Shredder).

It does make me wonder, though.  In the first or second installment of the Battle Nexus five-parter in the 4Kids cartoon, the Turtles walk among statues of previous champions and they see one of the Shredder.  Or what looks like the Shredder.  But we never learn any further details about that.  Was it the Utrom Shredder who fought in the Battle Nexus?  Was it the Demon Shredder?  Or was it Oroku Yoshi?

Mikey gets the most page space in this issue and it is ALL exposition.  The sequence is nothing but T’Zirk regaling Mikey with an update on Triceraton history between the Tri-Sports Arena battle and now.  I’m not saying the stuff isn’t interesting, but it remains an info-dump of the worst kind.  World-building is cool when it’s organic to the narrative, not when the characters sit down to a dissertation about the history of their universe for the benefit of the audience.

The brief tie-in to Steve Murphy’s Professor Obligado serial was the coolest part, since I really loved that storyline.  I don’t think we ever get any further details about it in Volume 4, alas, but the synergy between TMNT Volume 4 and Tales Volume 2 was momentarily exciting.  I love the idea of evil Utroms, or at least a nefarious Utrom shadow ops group, and that’s something I could have done with seeing more of.  It sort of turns the familiar on its head, as the previously “evil” Triceratons are shown to be more peaceful and reasonable, while the “benevolent” Utroms are revealed to be shady as fuck.

But, again, more ideas introduced and never followed up on.  Such a cocktease.

We’re getting down to the wire with Volume 4, but I ought to save my closing thoughts for when I get to the for-real last issue (or the last issue published).  Sometimes even I forget that this wasn’t the REAL last issue of the series.

Just the last issue anybody read.