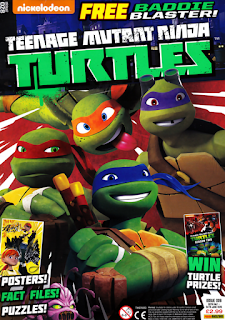 In his lab, Donatello is working on repairing the tPhones when Leonardo grabs him: There’s a Kraang plot to foil!  As Donnie and his bros head to yet another Kraang facility and smash up their plans, Donnie laments that every time he gets started on a project, duty calls.  Suddenly, he has an epiphany. 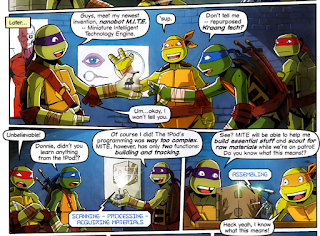 Later, back in his lair, Donnie introduces the nanobot M.I.T.E. (Miniature Intelligent Technology Engine) to his brothers.  MITE can take raw materials from throughout the sewer, form them into useable parts and then complete assigned projects.  As the Turtles leave on patrol, Donnie shows MITE some schematics and assigns it to repair the tPhones.

When they return, Don is pleased to see that MITE completed the job.  However, what he doesn’t notice is that MITE harvested the parts from some of the electronics around the lair…

As the week passes and the Turtles are occupied thwarting the Kraang, the Foot and the Purple Dragons, MITE completes increasingly more complex projects for Don.  At one point, Don returns to the lair to find that MITE has replicated itself in order to finish the workload.  Don is concerned about the initiative at first, but is soon blinded by the possibilities.  As the Turtles leave to take down some thieves in an escape van, the MITEs find a payload of Donnie’s blueprints and get to work.

The Turtles chase the van down in the Shellraiser, but every time they try to launch an attack, one of their weapons malfunctions.  They eventually stop the van via dumb luck, but when Don takes a look under the Shellraiser's hood, he’s horrified to find it cannibalized for parts.  He realizes now that the MITEs have been taking the lair apart to build his projects and the Turtles rush back home. 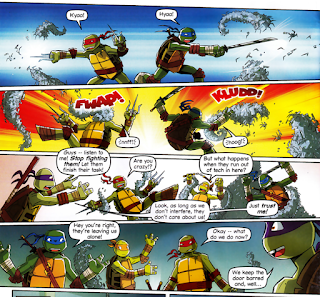 Returning to the lab, they find a swarm of MITEs building all of Donnie’s dream projects, including the useless and unfeasible ones.  They try to stop them with force, but the MITEs are too small for them to destroy.  Donnie tells his brothers to seal all the doors in the lab and just wait.

Eventually, the MITEs use up all the resources in the lab and, having nothing else to work with, begin taking each other and themselves apart.  After a while, no MITEs are left active.  Donnie is glad the problem literally took care of itself, but ponders where he’s going to get new raw materials to fix everything they destroyed.

In the end, the Turtles go dumpster diving.

*Leo mentions Don’s disastrous attempt at reverse-engineering Kraang tech via the tPod in “I Think His Name is Baxter Stockman”.

*The parsing “tPhone” and “T-Phone” are used interchangeably in this issue.  I’ve still yet to determine which is the “right” one, but since it’s an iPhone spoof, I’m guessing the former is correct.

You know, for all of Leonardo’s bitching about how the world rests on his shoulders and the tremendous burden the leader must carry, it really is Donatello who does the lion’s share of the work.

I mean, just look at what’s on his plate in the Nickelodeon cartoon right now.  He’s got to cure Mutagen Man, he’s got to cure Karai, he has to cure his brothers whenever the Creep or the Parasitic Wasps turn them into goop or zombies, he has to constantly come up with new inventions to save the day, and ALL while carrying his share of the physical burden that comes with going out and fighting ninja and mutants and aliens.

Jesus Christ, Leonardo’s got nothing on all that.

At times, it makes me sort of hate Donatello, as he becomes this deus ex machina to conveniently resolve a conflict at the last minute (character poisoned by Fishface?  He can cure them!  Character turned into goop by the Creep?  He can cure them!  The Kraang hanging out in an underwater base?  He can build a submarine!).  Admittedly, Donatello’s almost always been this way, but the writers tend to think of “science” rather childishly, as if there were no such thing as different scientific disciplines even the greatest minds in the world have to spend a lifetime focusing on.

Donatello can accomplish whatever the plot needs him to accomplish, just so long as the conflict has a solution that can be described as “science”.  I swear, just because you’re a rocket scientist that doesn’t mean you can also be a brain surgeon.

Anyway, this comic doesn’t necessarily address Donatello’s “jack of all trades” science prowess, but tries to approach the matter that there aren’t enough hours in the day for him to do everything he does.  Granted, it doesn’t solve that problem, but it’s nice to see it acknowledged.

While the script isn’t a knee-slapping comedy, I did like the pacing of the story as Donatello’s thrill at MITE’s initiative soon gives way to concern.  The manner in which he tricks the MITEs into defeating themselves was pretty good, too, though one questions why they didn’t just tear down the walls and doors with their lasers.

All in all, a pretty good story.  It inspired me to go off on a tangent, and that’s always nice.