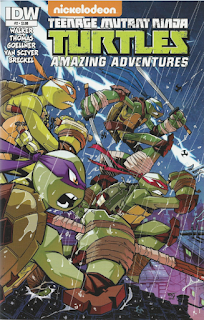 On the pier, the Zodiac has taken over Splinter’s mind and surrounded the Turtles and Shredder with his mutant army.  Shredder propels an attack, but the Zodiac and his crew vanish in a smoke screen.  The Turtles reluctantly ask the Shredder to explain the situation and the Shredder reveals all…

Back in Japan, when he and Hamato Yoshi were still allies, they had another friend named Tetsumi Onamota.  One day, Tetsumi found an ancient artifact he called the key, which allowed him to siphon energy from the animals within the Chinese zodiac.  Unfortunately, a side effect caused the life force of those around him to be siphoned off, too.  Growing mad with power, he took the lives of half the Foot Clan.  Ultimately, Oroku Saki and Hamato Yoshi confronted Tetsumi and killed him (cutting out his right eye in the process). 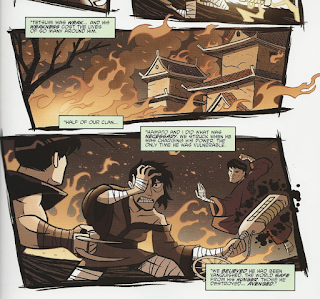 In a warehouse, Splinter awakens.  He tries to talk the Zodiac down from his mad scheme, but his former friend is too far gone.  He wants the power he was denied as well as revenge against those who left him for dead (and turned him into a mutant).  Using the key, he’s already siphoned power from several animals of the Chinese zodiac (hence his ram-like appearance) and now he siphons the rest from the available mutants, turning him into a huge Chimeric creature.

The Turtles smash their way through the Footbots and Donatello reveals that he slipped a tracer on Shredder before he left.  They escape and follow the signal. 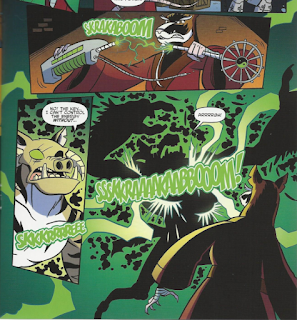 Shredder arrives at the warehouse first, less interested in saving Splinter and his mutants than obtaining the key for his own purposes.  The Turtles arrive and a huge fight breaks out with all the mind-controlled mutants.  In the chaos, Splinter steals the key and breaks it in two.  The released energies course through the Zodiac’s body, turning him to dust.  Shredder orders his Foot mutants to retreat and they vanish in a cloud of smoke.

Down in his lab, Donnie looks at the key and comes to the conclusion that it’s Kraang tech, though he’s surprised to discover that the Kraang have been operating on Earth for so long.  Leonardo sees that Splinter looks pensive and asks him what’s wrong.  Splinter ponders that he once thought Tetsumi dead before and was wrong.  He fears that one day the Zodiac might return.

Michelangelo is bored.  After aimlessly roaming the lair, he comes across Splinter, who suggests that he make his own entertainment.  Mikey likes the idea and gathers art supplies to create a comic book…

The Turtles are roaming the rooftops when they hear music.  They follow the sound and find a festival that’s sponsored by Ground Chuck Energy Drink.  Mikey starts dancing and accidentally knocks over a giant prop can of Ground Chuck on the audience.  Much to the Turtles’ shock, the audience is comprised entirely of Kraangdroids (dressed as hipsters) who have come to dance. 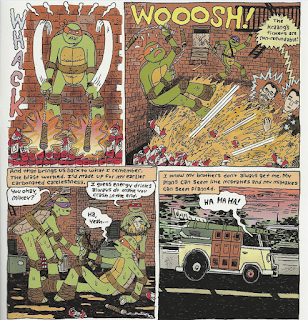 The fight goes poorly for the Turtles until only Mikey is left to save the day.  He sees a pallet of Ground Chuck cans and smashes them open with his nunchakus.  The wave of energy drink washes the Kraangdroids away and the Turtles escape in the Party Wagon.  Mikey figures that sometimes he messes up, but he always comes through in the end.  Because he’s a Party Dude!  The End.

The other Turtles read Mikey’s comic and are not impressed.  Splinter, however, says that it reminds him of the gag manga he used to read as a boy and asks to keep it in his collection.  As the Turtles go out on patrol, Splinter places it on the shelf next to the photo of himself, Tang Shen and Miwa.

*In the back-up story, Raph references “the gathering of the Irma”.  Kraang Subprime gathered all his Irma-bots in the season 3 episode “Battle for New York, Part 1”.

*This issue was originally published with 2 variant covers: Regular Cover by Jon Sommariva, and Subscription Cover by Ruairi Coleman.

Amazing Adventures concludes its first storyline and, superficially, it doesn’t seem too different from New Animated Adventures.  The plot didn’t deviate substantially from the continuity of the show and maybe it wasn’t the total diverging timeline some fans were anticipating.

But I liked it.

While it didn’t go “full Archie” right off the bat, you can tell the rules are a bit different from New Animated Adventures.  Shredder plays a large role in this arc, something he never did in the previous volume, and new content is added to his and Splinter’s back story (regardless of whether it may or may not fit with whatever timeline the Nickelodeon crew is working with).  While it isn’t overtly obvious and plastered all over the page, you can tell that Amazing Adventures has loosened its tie and has some more freedom to move than New Animated Adventures did.

There were elements I both liked and disliked about this conclusion.

The story wasn’t terribly violent on the surface, but the subtext was pretty brutal.  Tetsumi murdered half the Foot Clan and had to be killed by Saki and Yoshi?  Dang.

The violence is implied or summarized rather than explicitly shown, which I appreciate since this is a comic for kids and needn’t be a gorefest, though it leaves us with some logical gaps.  How did Saki and Yoshi kill Tetsumi, what did they do with his body and why didn’t they take the key after they were finished?

Because whatever they did, Tetsumi survived and used the key to grow more powerful.  Zodiac says that Splinter is to blame for turning him into a ram-man, so I’m guessing Tetsumi used the key to save his own life at the cost of his humanity?  It’s sort of unclear.

I do think that the Zodiac has a lot of potential as a villain and I hope we see more of him.  His demise was rather lackluster, admittedly (destroy the key and he explodes), but I’d welcome him back as a recurring antagonist.

Chad Thomas’ art is great, but it always is.  There are little moments I love; single panels that are a lot of fun to take in.  I love that last panel on Page 7, as the Turtles escape the Footbots and leap off the roof.  They’re each doing something different: Raph is falling backward as he nails a Footbot with a shuriken, Mikey is clumsily diving off the ledge in a “gangway!” pose, Don is pole-vaulting with his staff to gain some extra air and distance, and Leo is leading the way in a crouched, deliberate pose.  It’s chaotic, full of energy and each little flourish actually coincides with the personalities of each Turtle.  And that’s just one panel. 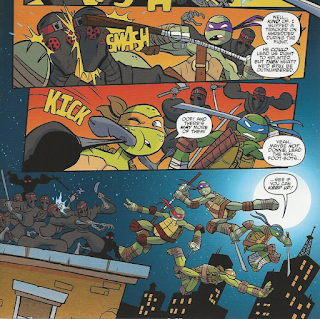 I’ll sort of confess that I wish flashbacks to Saki and Yoshi in Japan weren’t always filled with kimonos, pagodas and Shinto temples, just because it makes it look like they were around 200 years ago, but that’s a problem that extends much further than Thomas’ work (almost EVERYONE seems to think Japan hasn’t aged a day since Feudal times or something).

I guess if there’s one other tiny, insignificant thing that bugged me and will bug no one else, it was a lack of consistency with the Japanese naming conventions.  Hamato Yoshi and Oroku Saki are consistently rendered in the traditional Japanese naming convention of familial name first, given name last (in the West, their names would be rendered Yoshi Hamato and Saki Oroku).  Tetsumi Onamota, however, has his name rendered the Western way of given name first and familial name last.

It’s nothing, really.  The inconsistency bugs me, is all.

Goellner, Thomas and Van Sciver also offer up a nice back-up story that was way more enjoyable than the one from the previous issue.  Mikey drawing his own comics and writing his own stories is nothing new, but it was more of a Mirage thing that off-shoot media never much picked up on.  I’m, of course, happy to see it show up in a Nickelodeon tie-in story.

Van Sciver’s art is a little crude, but befitting of the context.  It’s very “indie” looking and that totally fits what you’d expect to see from Michelangelo.  I rather liked the idea that the Kraang would take leave from their fiendish operation to robotically dance at a music festival.  It was a silly Mikey-style idea but also something I could sort of see happening in the “canon” of the show.

All in all, there were weaknesses in this issue, but I still think Amazing Adventures has gotten off to an excellent start.

Grade: B- (as in, “But what about Doctor Cluckingsworth?  Will she return to Northampton?  Remain amongst the Turtles?  Strike out on her own?  Clearly, this is the most vital deviation from the cartoon’s continuity in the whole book”.)