The Meeting of the Mutanimals, Part One 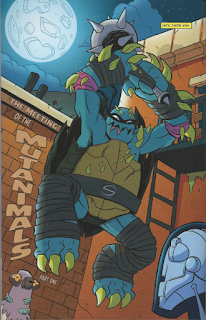 “The Meeting of the Mutanimals, Part One”

The Kraang have invaded New York and begun rounding up citizens for mutation and deportation to Dimension X.  Pigeon Pete is cornered by a squad of Kraangdroids only for Slash to come to his rescue.  As Slash pounds the Kraang, Pete notices a truck full of bread and begins inadvertently stomping the Kraang in his zeal to get the baked treats.  Slash sees this and comes up with a plan. 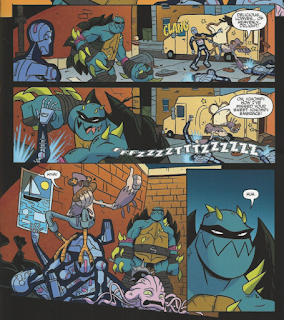 Flashback.  Slash is still Spike, a normal turtle and Raphael’s faithful pet.  He watches as Raph trains alone in the dojo.  Splinter asks Raph why he isn’t training with his brothers and Raph explains that they goof off too much and don’t take fighting seriously.  Splinter sympathizes, but warns him that a time will come when he will depend on help from others. 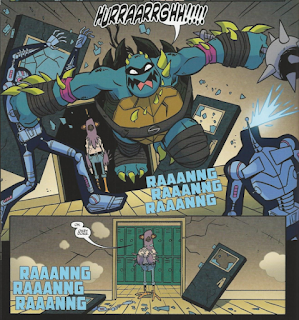 The present.  Going on info provided by Kurtzman, Slash leads Pete to a school that is being used by the Kraang as a prison for more dangerous captives.  They sneak in and work their way to the gymnasium where several prison cells have been installed.  Slash barges in and begins smashing up Kraangdroids but is felled by the butt-cannons of some Kraang Apes.  Kraang Subprime then orders Slash to be thrown into a cell next to Leatherhead and Dr. Rockwell.

*This story is continued from TMNT Amazing Adventures #2.  The story continues in “Meeting of the Mutanimals, Part Two”.

*This story takes place sometime between “The Invasion, Part Two” (when the Kraang take over New York) and “The Battle for New York, Part One” (when the Mutanimals debut).

Now here’s a flashback story we all maybe didn’t realize we wanted: How the Mutanimals became best buddies!  Admittedly, the tale in this first half is pretty typical, but perhaps Manning will throw us something unexpected in the back end.  Even if it does turn out to be a pretty standard jailbreak story, it’s neat to see how they all got together, regardless.

I rather like the Nickelodeon characterization of Pete.  He’s dimwitted and weak, but not entirely useless.  Slash knows how to manipulate his strength (via bread) and so Pete carries his own weight.  To an extent.

It’s a funny thing the Nick cartoon has been doing; introducing mutant characters who have special skill sets but aren’t all necessarily fighters.  The recently introduced Mondo Gecko is another great example; Mondo can skateboard like nobody’s business but is useless in any sort of confrontation.  Characters like that help make the line-up of supporting mutants feel more diverse and specialized; not everyone who gets mutated is going to become a master warrior or dangerous monster.

The flashback was an interesting tidbit; the idea that Spike was listening and considering everything around him and got as much out of Splinter’s lessons as the Ninja Turtles did.  It goes toward that idea of Spike/Slash being “the fifth turtle”, albeit nobody realized it at the time because they all thought he was just some dumb animal.

Chad Thomas’ art is still great and there are lots of dynamic panels of Pete and Slash charging or crashing into action.  His Kraang Subprime looks a little stiff, though, and he’s one character who I think would benefit from being hysterical and exaggerated.