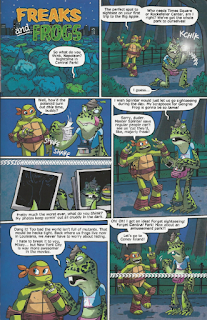 Napoleon Bonafrog has come to New York from Louisiana for a visit and Mikey is showing him the sights.  They head to Coney Island for some fun, but while Mikey is out getting a pizza, Napoleon sees a dork in a frog mascot costume getting hassled by punks.  Thinking the dork is a mutant frog like himself, Napoleon swoops to the rescue.  Of course, the punks beat up Napoleon and the dork, taking off his mask, runs screaming (much to Napoleon’s surprise). 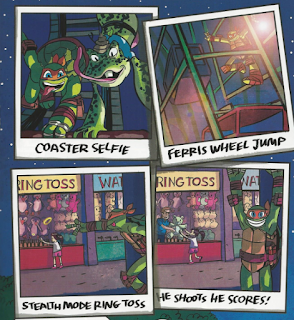 Mikey swoops in at the last second and together, he and Napoleon use some carnival games to incapacitate the punks.

Later, Napoleon shows Mikey a photograph of his mutant frog girlfriend back in Louisiana and tries to convince Mikey to move down there with him.  He says that humans are lame and he’d be happier among the mutant frogs.  Mikey mentions April, Casey and Kirby as examples of humans who aren’t lame and suggests that it’s just a case of some people being jerks, not all humans being bad guys.  And besides, Mikey says he could never abandon New York’s pizza.

*Napoleon Bonafrog first appeared in the season 3 episode “The Croaking”.

At the risk of reviewing the cartoon and not this comic, I really, really didn’t care for how the Nick show handled the Punk Frogs.  Heck, I’m hesitant to even call them the “Punk” Frogs since there was nothing even remotely “punk” about them.

I guess it comes down entirely to subjective opinion, since I never liked “Napoleon Dynamite”, so turning Napoleon Bonafrog into a parody of that movie character did absolutely nothing for me.  But even forgoing whether or not you liked the movie, the gag is fairly one-note.  All Napoleon does is sigh really loudly and go “GOSH” and after more than one sitting the parody stretches thin.

So with that in mind, if you’ve seen “The Croaking”, then there isn’t anything particularly new in “Freaks and Frogs”.  Just Napoleon cribbing dialogue and catchphrases from that comedy flick I didn’t like.  Well, there IS a sort of moral nugget in there about not judging an entire group based on the actions of a few, but it mercifully is not laid on too thick.

Costa’s art is a bit better than his script.  He goes for some perspective-enhancing angles and there are a few chuckle-worthy sight gags (I liked the “Grrr I’m a jerk” note safety-pinned to the back of the generic punk's denim jacket).  The polaroid montage was cute, too.

I just wish I didn’t have to look at Napoleon Bonafrog’s annoying face throughout this story (is that poop on his head?  Is he wearing poop as a hat?  Is that how low the cartoon will reach for a laugh?).