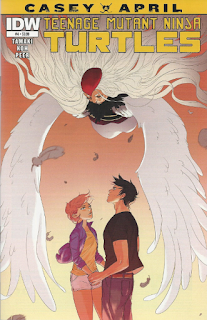 The past.  As April prepares to leave on her road trip, Leonardo stops her.  He says that he felt something weird when he first received the scroll from Splinter.  He warns her that it may not have been an accident that they came into the scroll and there may be higher powers at work. 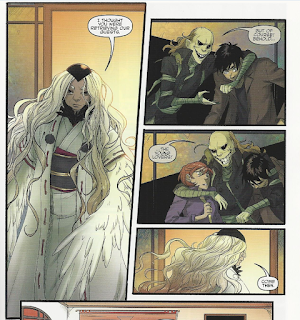 The present.  The Rat King leads April and Casey down a dark corridor of the thin place; a limbo between dimensional space.  Along the way, he tells them of some of his exploits in the past, of how he made and broke royalty through the centuries (Genghis Khan, Marie Antoinette, Richard Nixon).  They then enter into the room of his sister, the Japanese bird-woman named Aka.

Casey is hesitant, but April insists that they speak with her, as she feels their meeting with Aka was the entire reason they came into the scroll in the first place.  Aka looks over the scroll and identifies the flaming Joshua tree as being symbolic of herself.  She explains that she and her family are immortals who ruled the Earth a millennia ago and warred among themselves.  However, when humans entered the picture, they changed the playing field and the immortal siblings adapted their struggles by manipulating mankind for their own benefit. 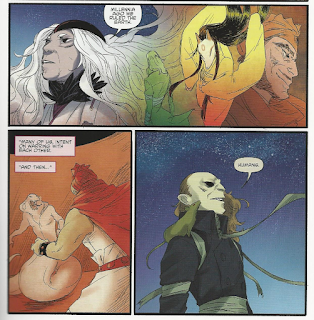 Bored with all the talk, Casey tries to shake down the Rat King for answers.  Equally brash, the Rat King transforms into a giant dragon made of rats and attacks him.

Aka freezes time so that she and April may speak privately.  She tells April that a great change is coming, a war, but urges her not to fear it.  Her immortal siblings are gathering and things are about to become very dangerous, and when that happens, Aka says she will leave this plane of existence.  As time resumes, the Rat King toys with Casey and tosses him around.  However, time suddenly runs out and everyone vanishes in an instant. 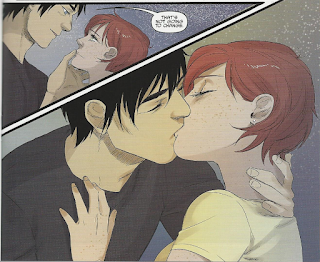 April and Casey find themselves where they were before it all started; Casey at the old gas station and April outside the trailer.  They reconvene and hit the road in the van.  Leo calls to check in with them and as Casey gives Leo a brief summary of their recent exploits, April unfurls the scroll and finds one of Aka’s feathers wrapped in it.  A little later, April and Casey kiss and make up before driving directly into an ominous storm looming on the horizon.

*This story is continued from TMNT: Casey & April #3.

*This issue was originally published with 2 variant covers: Regular Cover by Koh, and Subscription Cover by Sophie (Ross) Campbell.

If you’re wondering why I’m so late with this review, well, the lateness might as well substitute AS my review.

I just have no enthusiasm for this miniseries.  I completely forgot to pick it up last week, meant to get it sometime this week, eventually decided I’d just grab it on the weekend… If I didn’t have anything better to do.  If I felt like it.

So I bought the comic, I read it, and I just can’t muster the energy to get mad at it for being so boring or anticlimactic.  I guess one could say it’s the hallmark of a truly underwhelming piece of work when it can’t even inspire distaste or outrage.  It’s one thing for a work to be remembered as terrible, but it’s an even greater blow for a work to be forgotten entirely because it’s so meaningless and dull.

80 pages altogether and I think I could summarize the whole story in three sentences.

Maybe that’s the biggest disappointment of this miniseries.  It’s slow and doddering, but such a pace could be forgiven if it leads to a fulfilling climax.  Casey & April ultimately amounts to a decompressed advertisement for a BETTER storyline about to unfold in the TMNT ongoing series.  “Hey guys, thanks for buying our miniseries, but the REAL action is going to happen over in the main book.  All this was just to get us through four months until #50 could be finished and reset the narrative.”

Everything leads up to Aka telling April (and the audience) that the Pantheon is coming and they’re going to be the new Big Bads after the Foot take a snooze following the “Vengeance” storyline.  THAT was the payoff for this whole miniseries.

But did it tell us anything we didn’t already know?  The machinations of the Rat King and Kitsune have been ever-present in the ongoing for a while now, so we already knew that they were building themselves up to be the new antagonists.  The previous miniseries, TMNT/Ghostbusters, even expanded the Pantheon a bit and gave us more of an idea about them.  Aka’s dialogue tells us NOTHING except maybe some metatextual bullshit about “change” (which we already knew was coming because we’re reading the ongoing).

So hey, maybe an argument might be made that this miniseries wasn’t about the story, it was about the character development.  But WHAT character development?  The relationship between April and Casey?  Over the length and breadth of this storyline, it amounts to “sometimes they fight, but deep down they really love each other”.  Didn’t we already know that, too?

Accompanying the lack of payoff is the lackluster presentation in both script and art.  Tamaki’s dialogue, as I’ve pointed out before, is stilted and awkward.  There’s that “talking at each other, not with each other” element I spoke of in the past, but there are little things that irk me even more than such setbacks.  When Casey answers Leo’s phone call, he says, “It is good to hear your voice.”  That’s just… weird.  “It is good”…?  Casey sounds like a robot.  Maybe the line was supposed to be, “Is it good to hear your voice” and the letterers (both of them) messed it up.  I don’t know, but it sounds clumsy.

There’s also the lazy, on-the-nose symbolism that’s been plaguing the book since it began.  The heart-shaped rock from the first issue was bad, but the series actually ends with April and Casey driving directly into a storm on the horizon.  Look, that was clever when “Terminator” did it in ’84, but it’s been thirty years.  The old, “There’s a storm on the horizon” bit just doesn’t hold up like it used to.  And especially when it comes after that ponderous speech about “change” and the impending “war”, etc.  These are some pretty ancient clichés that I’d thought most writers had cast away long ago.

And then there's the Japanese bird-lady named "Aka".  "Aka" is Japanese for "red".  Casey refers to April as "Red".  Is there supposed to be some deeper connection between Aka and April?  Aka said April would be important in the changes to come and took a special interest in her, but what does the whole "red" bit have to do with anything?  It's pointless, half-baked symbolism.

As for Koh, she isn’t a bad artist, but her style is listless.  How could Casey fighting a dragon seem so boring?  There’s such a glut of negative space in this series, particularly these last two issues that happen within the thin place, that there isn’t anything to look at but the characters.  Yes, there's motion to them, but when we can't see them interacting with anything, we've no sense of scale or weight, which makes even the most kinetic sequence feel static.

And, on a completely subjective level, the “manga-wannabe” aesthetic is off-putting to me.  If I wanted to see someone fumble around trying to draw “anime”, I’d browse Deviant Art or flip open a seventh grader's marble notebook, thank you.

The entire miniseries feels amateurish.  It wants to be a romance story first, and I get that, but it doesn’t actually develop April’s and Casey’s relationship in any meaningful way.  They’re pretty much the same at the end as when they started.  The characters can pretend like it's different, but "we're opposites but we love each other anyway" is not a drastic shift regardless of their labored response that tries to convince us otherwise.

There’s the whole narrative about the Pantheon, but it doesn’t tell us anything we didn’t already know thanks to the ongoing.  This whole miniseries is a superfluous detour at best, killing time until the main book reaches #50.

I want IDW to experiment with different genres and takes on the TMNT characters; I think that’s AWESOME.  And, of course, not all those different takes are going to hit the mark.  From my perspective, Casey & April missed the mark by a wide margin.  That doesn’t mean IDW should double-down on “typical” Ninja Turtle stories or anything; there’s lots of room out there for more offbeat TMNT literature.

Grade: F (as in, “For what it’s worth, ‘sucked’ might be too strong an appraisal.  You could probably skip this whole miniseries and not even know you missed it.  ‘Pointless’ might be the operative adjective.”)