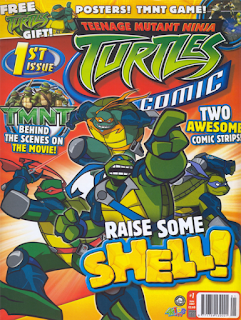 The year is 2105.  The Turtles accompany Cody O’Neil to the Galactic X-Treme Hoverboard Tournament: A promotional event for O’Neil Tech where Cody intends to unveil his latest hoverboard design to the masses. 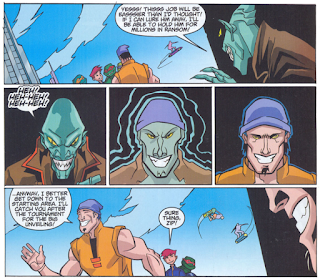 Watching a monitor, Raphael catches a glimpse of the hoverboard champ, Karbon “Zip” Zemo, and is unimpressed with his skills.  Cody informs Raph that Zip helped design the new hoverboard he’s unveiling, but Raph isn’t swayed.  Meanwhile, a shape-shifting alien takes on Zip’s form and plots to kidnap Cody for ransom.

As the Turtles and Cody head to their seats, Cody stops to check in with Serling.  The fake Zip uses this opportunity to lure Cody away from Raph and Mikey.  The two Turtles turn around just in time to see the imposter snatching Cody away.

The Turtles give chase right into the hoverboard arena.  They grab a pair of boards and fly off after the alien.  Mikey gets knocked out of the race, leaving just Raph to show off some sweet moves.  He then launches his sai at the alien, knocking him off his board.  The real Zip then zips in and catches Cody. 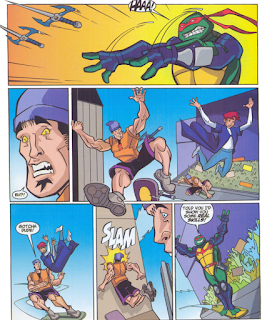 After Constable Biggles takes the alien kidnapper away, Cody unveils his new hoverboard design to the audience.  Zip, having been so impressed with Raph’s moves, hands him the trophy and announces him the winner.  Cody tells Raph that part of the prize is the new hoverboard, but Raph declines, insisting that an old fashioned skateboard is more his style.

*This story is continued in TMNT Comic #2.

*This story takes place during the sixth season of the 4Kids Teenage Mutant Ninja Turtles cartoon, when it was rebranded Fast Forward.

*Mikey ribs Raph for losing to him in the Battle Nexus Tournament, which happened in the season 2 episode “The Big Brawl, Part 3”.

*These magazines contain many other features, including interviews and product previews, but I’m just going to focus on the comics.

Yeah, Fast Forward was that obvious “jump the shark” moment that pretty much ended the 4Kids TMNT cartoon.  Admittedly, the Ninja Tribunal season that came before it wasn’t superb, but it still felt like more of an organic continuation of the series than Fast Forward ever did.

Alas, Fast Forward was immortalized in a comic magazine in the UK, which means I have to review it.  Special thanks to “Demon-Alukard” for helping me find these.  They may not be very good, but I appreciate having more fodder for my site!

Now, when I say that they aren’t very good, that doesn’t mean that they’re oh-holy-shit-god-awful or anything.  They’re just very bland and typical; everything you expect from short magazine comic strips.  The UK has a history of publishing these sorts of TMNT comics: Fleetway did it in the ‘90s, Titan did it in the 2000s and Panini is doing it now.  So I guess this is a tradition or something.

Author Tristan Jones, who has written some of the best TMNT comics for Mirage, tries to milk what he can from the Fast Forward theme.  There’s an extreme sports setting, an alien villain so bland he doesn’t get a name, and appearances from such lesser Fast Forward supporting cast members as Serling and, ugh, Constable Biggles.  The humor is very dry and the story goes through the motions.  He peps it up with some running gags from the show, such as Mikey mocking Raph’s loss at the Battle Nexus, but it’s all pretty ho-hum.

Anthony Williams does a good job capturing the style of the TV series, and the colorists likewise get the pallet down.  Fast Forward was also the season where the budget sort of fell out for the show and all the characters got these new angular redesigns so they’d be cheaper to animate.  It wasn’t nearly as ugly as Back to the Sewers, but it still didn’t look very good.  Not that I’m pinning the blame on Williams or anything, I’m just saying he didn’t exactly have the best house style to work with from the start.

Also included in this issue is the first 8 pages of TMNT Movie Prequel #1: Raphael.  I’ve already reviewed that comic, so I won’t go into it here.  I will say, though, that the colorization job looks excellent.

With my Mirage reviews nearly exhausted, I’m sort of left to dig through the odds and ends of the TMNT comic catalog to find content for TMNT Entity.  I have handfuls of these UK magazine strips from the various eras, though none of my collections are complete (my Fleetway library has a ton of gaps).

I’m missing #12 of these Titan Magazine comics and I cannot, for the life of me, figure out if they published a #13 (the indicia says the book was published 13 times a year, but that doesn’t mean it couldn’t have been cancelled early).

If you know more about them, give me a shout in the comments section.


EDIT: Mystery solved!  13 issues!  So I now have a thumbnail of the cover for #13, which is at least enough to make a placeholder article, though I don't know what's in the issue beyond the Tales of the TMNT partial reprint.  But at least it's something.  Thanks, commenters!