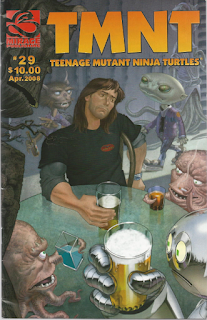 The Fugitoid, Glurin and Glyminal enter Galaxies Bar, a pub in New York that serves humans, aliens and superheroes.  They take a seat at Casey’s table, but their friend seems to have drowned himself in a few too many drinks (lamenting the absence of April).  Casey asks how the raid on the Xihad compound went and the Fugitoid explains that they caught everyone, but they’ve yet to identify “Yogu”, the alien mastermind.  Furthermore, they’re curious about what the xenophobic Xihad would be doing teaming up with an alien, and also what they were planning to do with the Guardifriend dolls, which are still poised for a holiday retail release. 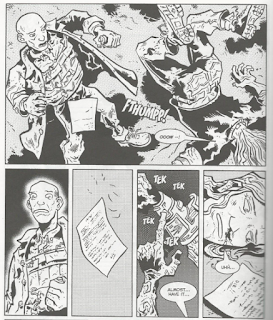 Casey gets up to use the restroom and when he returns, he finds a Xihad skinhead with bombs strapped to him reading a manifesto to the crowd.  The skinhead says that Earth should be the domain of humans, as was designated by God.  He claims that the aliens are even worse than the illegal immigrants who were coming across America’s borders before them.  Casey tries to tackle the skinhead, but misses and falls flat on his face.  Glyminal immediately shrinks the skinhead down and the Fugitoid, taking on his larger robot form, scoops the skinhead up just as he sets off his explosives, protecting the crowd from any danger. 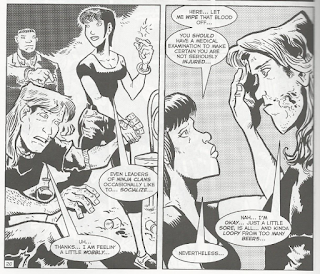 As a security guard scrapes the evidence off of the Fugitoid’s hands, Karai approaches Casey.  She was taking a break from Foot Clan activities at the bar and noticed Casey’s valiant attempt at heroism.  She encourages the inebriated Casey to come with her back to her apartment to have his bruises looked at.

In the Battle Nexus, Leonardo, Jorut, Soowiiksa and Oroku Yoshi stop for a bite to eat.  Leo is uncomfortable with the idea of a “good” Shredder, but Jorut explains to him that many duplicates from across the multiverse find their way to the Battle Nexus.  In fact, Soowiiksa was once challenged by her own and killed her.  The Daimyo then instituted the Netherim Cadre, a group who specializes in preventing such tragedies. 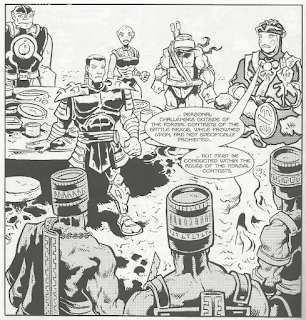 Suddenly, Oroku Yoshi is accosted by three of The Warriors of Perfect Virtue; the same band of warriors that have been plaguing the Foot Clan in Leo’s dimension.  They are about to fight when the Gyogi appears and warns them that fighting in eating establishments is forbidden and will lead to banishment from the Nexus.  The Warriors of Perfect Virtue leave, but vow to even the score with Oroku Yoshi.  Yoshi explains to Leo that the Warriors have been seeking his death for some while. 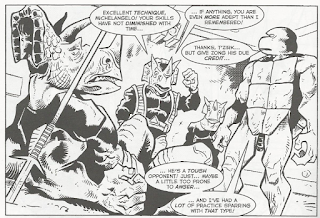 Onboard the Kaituk, Michelangelo finishes up his spar with Zong, mopping the floor with the young Triceraton.  Captain T’Zirk asks if Mikey could teach his recruits some hand-to-hand techniques before they land and Mikey is happy to oblige.  Later, Mikey heads to the bridge and T’Zirk shows him their destination, now in full view: The New Homeworlds of the Triceraton Republic (the giant cone-ships all docking into a huge spherical artificial planet).

*Casey compares the Guardifriend dolls to the Li’l Orphan Alien dolls, which originally appeared in Michelangelo (microseries) #1 and last appeared in Tales of the TMNT (Vol. 2) #53.

*The alien in the bathroom with Casey is either the same alien who appeared in Michelangelo: The Third Kind #3 or of the same species.

*This issue and all future issues of Volume 4 were not released direct to market.  This issue was limited to 1000 print copies, available exclusively from the Mirage Comics website.  An online version was made available for free from Wowio.com, but has since been taken down.

So from here on out, Volume 4 isn’t exactly easy to read.  While the issues were made available for free online, that was 7 years ago.  And a lot can happen in 7 years.  Wowio no longer hosts them and the TMNT website got overhauled when Viacom bought the franchise, which resulted in that official upload being removed, too.

The only legit way to read many of these issues now is to hunt down the physical copies.  And at only 1000 copy print-runs, that can be pretty expensive.  A few of the later “limited edition” issues of Volume 4 are hosted on Peter Laird’s TMNT blog, but these early ones are not.

So yeah.  Don’t feel bad about downloading illegal scans of this comic.  The publishers aren’t really giving you an alternative.

Personally, I’ve bought physical copies of these “limited edition” Volume 4 issues, albeit at a somewhat considerable cost.  I missed out on this particular issue when it was available and wound up having to buy it at an inflated price on the aftermarket.  Needless to say, I’ve pounced on every issue since; if you think $10 is bad, you should see what they go for on eBay.

The issue-itself is nothing special, despite its rarity.  Just another chapter in the meandering saga of TMNT Volume 4.

Laird goes for a lot of world-building in this issue, but it’s a sort of sloppy, insincere world-building.  His approach doesn’t make you feel like this imaginary universe is lived-in, but rather makes it come across as even more artificial than ever.

The way Laird goes about world-building is by having the characters act like tour guides to one another and explain all the little nuances of their universe to friends or acquaintances.  In reality, they’re doing this for audience benefit, but it never feels natural or organic.  The characters just stop what they’re doing and deliver dissertations on beverages, restaurants, cuisine and the like.  Can you imagine if you lived life like these characters?

“Hey, where do you want to eat for lunch?”

“How about McDonalds?  It was one of the first major fast food establishments in the United States, which is a country in the North American continent of this planet.  While the original exteriors for the restaurants contained golden arches, the structures have since been simplified in appearance, although the arches have become the symbol for the brand.  The quarter pounder with cheese is the most popular dish, but the signature item on the menu is the Big Mac.  It contains three buns, a novelty at the time of its invention.  The top-most bun is called the ‘crown’, while the middle is the ‘club’ and the bottom-most is called…” 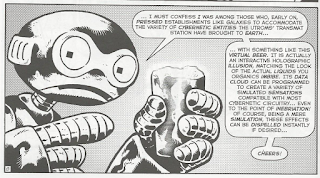 While there’s a certain amount of understanding I can lend this approach, as each of the three narratives feature characters out of their element and having to be educated, the back-to-back-to-back execution of this method is exhausting.  World-building is something best sprinkled throughout a narrative, done both subtly and in the “tour guide” fashion, as a way to teach the audience about the setting without coming across like the characters are straight-up talking directly to them.  All at once in a single issue is not the way to do it.

And there isn’t much else to say about this issue, except maybe hey!  Karai!  Haven’t seen her in a while.