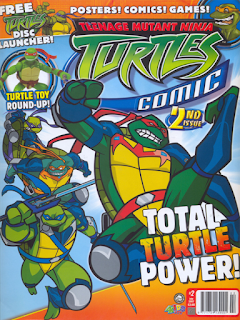 In Cody’s pad, Serling is sick and tired of cleaning up after the Turtles, who have been getting increasingly lazier thanks to the modern conveniences of the future.  Splinter is even more perturbed by this than Serling, and when Cody relays a news report about a major sewer blockage and missing repair crews, Splinter immediately sends his sons to investigate the danger. 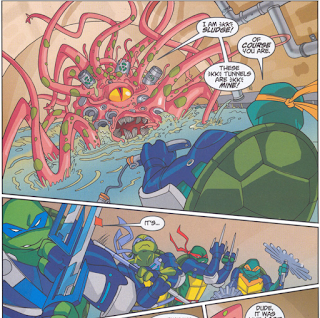 Traversing the old sewers of Manhattan, the Turtles feel somewhat nostalgic for their proper time and place.  Suddenly, they’re attacked by a tentacle-monster covered in toxic waste canisters calling itself Sludge.  The Turtles retreat down the tunnels as Sludge chases them, but soon discover that the layout has changed considerably since they were last in the sewers (which to them was only a month ago). 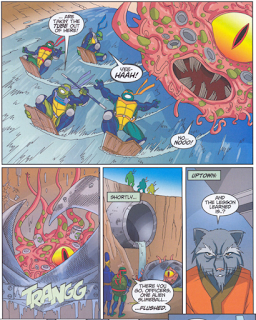 Reaching a waterfall, the Turtles grab some wooden planks at Michelangelo’s instruction and surf their way down.  Sludge follows them, but the Turtles trick him into taking the wrong pipe.  The monster ends up blasting out a drainage pipe and getting tangled in a chain-link fence.  The Turtles hand Sludge over toe Constable Biggles and head home.

Once there, the Turtles immediately return to their slovenly lifestyle of pizza and video games, failing to have learned any lesson from their adventure.  This disappoints both Splinter and Serling.

*This issue also contained the next 11 pages of TMNT Movie Prequel #1: Raphael with new colours by Junior Tomlin.

I guess if it’s a kid’s comic being written in the UK, Furman was bound to show up sooner or later.

Furman doesn’t seem to have been too familiar with the then-current 4Kids incarnation of the TMNT when he wrote this.  I imagine he was still picturing the Fred Wolf versions from the ‘80s when he hammered out the script.  So as a result, there are lots of pizza and surfing antics; the kind of stuff more prevalent in the older show than what was on TV at the time.  I suppose we should be grateful he didn’t call them Hero Turtles, at least.