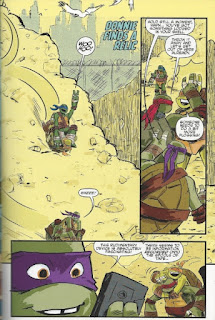 While sledding in the junkyard, Donatello notices Raphael has something lodged in his shell.  Donnie pries it loose and finds that it’s an unlabeled audio cassette tape.  He spends the next few days agonizing over a way to play it, but none of his machines can read cassettes and building a tape player is a lot more complicated than he thought.  Donnie fears that the cassette, being from the analog age, may contain some form of wisdom that has not yet been uploaded to the cloud and, if not transferred to a digital medium, might be lost forever. 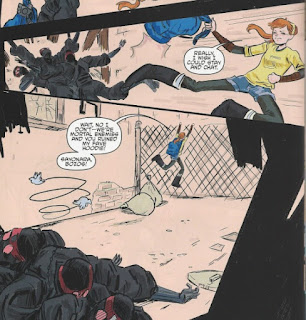 Sensing Donnie’s distress, April heads to a pawn shop to buy a boom box.  She trades an old record needle for it, but as she leaves, she’s accosted by a unit of Foot Soldiers.  April beats the stuffing out of them and returns to the sewer to present Donnie with the boom box.

As it happens, the tape contained a demo track from a circa 1987 indie rock band called Coco and the Pebbles.  They never hit it big or released any albums and so that tape is one of the only recordings of their music in existence.  The Turtles, April and even Splinter then get down to the hot licks.  Unbeknownst to Raph, he has a hard disk lodged in his shell…

I do love stories that revolve the outdated technology of my generation.  It’s low hanging fruit and an easy way to please me, but I don’t care.  I think my favorite episode of Cowboy Bebop is the one where the characters spend half an hour trying to find a Beta player only to end up with a VHS.  I'm an easy mark for that shit.

“Donnie Finds a Relic” is maybe a little ahead of its time, at least regarding the difficulty to obtain cassette players.  Donnie laments that the technology has been rendered antique and is now unobtainable while the boom box April finds in the pawn shop is priced in accordance with such rarity.  I’m pretty sure we aren’t quite there yet in regards to the scarcity of cassette players, but hey, maybe in another 5 or 6 years.

But I think the story might be intended more as a reflection of the child audience this comic is aimed at, who have never had to coexist with tape decks and VHS players.  To them, such technology IS lost to the sands of time and thus unobtainable, so I suppose it comes down to perspective.

Otherwise, the story is fairly straight forward.  I liked that Grace used human Foot Soldiers instead of the robotic Footbots which the cartoon has switched over to on a fulltime basis.  It’s always a pleasure to see some season one elements crop up when every other Nick TMNT outlet has moved on past them.

Grace’s art has that intentionally “rough” look in both the pencils and the coloring.  It's that “deliberately sketchy” aesthetic where background lines are left half-finished and the colors “miss spots” like they were haphazardly applied in quick brush strokes.  It’s a popular trend among indie artists, though perhaps getting so popular it’s losing its appeal.

Anyway, like a lot of these guest back-up strips, “neat” pretty much sums it up, but I’m glad to be getting these things.