Meeting of the Mutanimals, Part Two 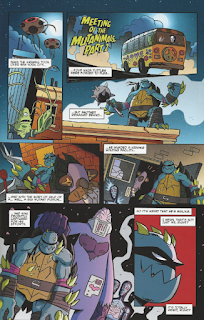 “Meeting of the Mutanimals, Part Two”

Unconscious in his Kraang holding cell, Slash recalls the past…

Spike watches as Raphael spars with Leonardo.  Raph can’t get the drop on his brother, so Splinter suggests he resort to misdirection.  Raph tricks Leo into thinking his Space Heroes pinball machine is busted and uses the distraction to tag his brother. 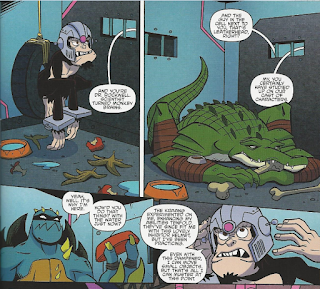 The present.  Dr. Rockwell uses his telekinetic powers to dump a bowl of water on Slash and wake him up.  Slash recognizes Rockwell and Leatherhead (who is in the next cell down).  Rockwell has been fitted with an inhibitor helmet, though his mental powers are strong enough that he can still levitate small objects with it on.  Unfortunately, he cannot operate the Kraang control panel, as it is too complicated.  Next to the control panel, Pigeon Pete has been shackled to the wall.  Seeing this, Slash concocts a plan.

Kraang Subprime then comes by and begins to gloat that soon he and his forces will begin converting the air on Earth into the atmosphere of Dimension X.  Slash tells him that by doing so, he’d destroy the greatest food on Earth: Pizza.  Having never tried pizza, Subprime orders his men to fetch him some from the nearby pizzeria.

They return, but the pizza has gone stale.  Slash loudly mentions that it’s too bad all the stale crusts, the BREAD, will go to waste.  Pigeon Pete immediately goes bonkers at the sound of “bread” and breaks free from his shackles.  Slash tells Rockwell to levitate the pizza over the control panel, and in his zeal to get the crust, Pete destroys the console. 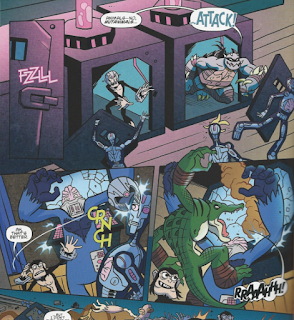 The cell doors slide open and Slash orders his team of mutant animals, his “Mutanimals”, to attack and retreat.

The past.  Spike watches as Raph struggles to get out of a hold that Splinter has him in.  Splinter tells Raph that he isn’t coordinating his body, but flailing all his parts independently.  He explains to Raph that he can be much stronger if he unites his parts into a single force.

The present.  Slash and the Mutanimals leap across the rooftops, now a fully assembled fighting force.

*This story is continued from “The Meeting of the Mutanimals, Part One”.

*Kraang Subprime mentions how Slash escaped the last time they captured him.  That was during the season 2 episode, “Metalhead Rewired”.  Pigeon Pete and Dr. Rockwell were also among the mutants who escaped from the Kraang in that episode.

The Mutanimals' origin story concludes.  Not really a whole lot to say about it; Slash’s escape plan kind of hinged on Kraang Subprime being an idiot, but the Kraang have never been that smart.

It was the flashbacks to Slash’s time as Spike that I enjoyed most.  Loved the idea that he was fully cognizant, even when he was just a normal dopey-eyed turtle, and was processing everything going on around him while he chomped on his leaves.

In a way, it adds some credibility to the fact that upon being mutated, Slash was instantaneously on par with (maybe even a little better than) the Ninja Turtles.  He basically got all the same training they did from Splinter, even if he didn’t actively participate in it.

Also, I liked the callback to “Metalhead Rewired” as a means to explain how Rockwell and Slash knew each other.  I’d forgotten about that episode and the collection of mutant characters who shared a prison block in it.  Good pull on Manning’s part.