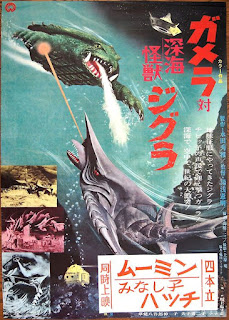 My trip through the Showa era Gamera series concludes.  It took a little longer than it was supposed to (I'd intended to finish up by Halloween), but I got through 'em all.

Here's an archive of my Gamera reviews so future generations may learn from my wisdom:

Gammera: The Invincible (US cut of Gamera: The Giant Monster)

War of the Monsters (Gamera vs. Barugon)

Return of the Giant Monsters (Gamera vs. Gyaos)

Destroy All Planets (Gamera vs. Viras)

Attack of the Monsters (Gamera vs. Guiron)

All-in-all, I'd say my favorites were "Return of the Giant Monsters", "Attack of the Monsters" and "Gamera vs. Monster X".  They're all weird and goofy and fun, but without long boring stretches like some of the other films in the series.

Now I'll get back to reviewing the 1987 TMNT cartoon produced by Fred Wolf.  The "proper" seventh season is actually full of a lot of good episodes and I'm looking forward to rewatching them.