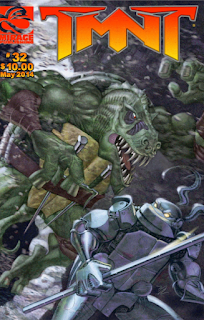 On the Utrom moon island, Glurin and the mutated Raphael are in the gym, discussing Michelangelo’s disappearance.  After their workout, Glurin promises to continue using the Utrom resources to look for Mikey, while Raph decides to head back to the lair and see if Donatello can’t come up with something.

On Route 91, April is almost through Connecticut and will be arriving in Northampton soon.  She’s ecstatic about seeing Casey again. 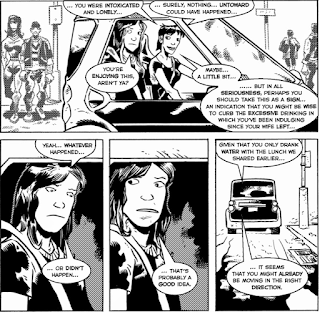 In New York, Casey and Karai have finished having lunch together and Karai is giving him a lift home.  Casey still wants to know what happened after he passed out at her place, but Karai refuses to share the details.  She suggests that perhaps he should use this experience as a lesson against excessive drinking.

Down in the lair, Raph can’t find Donnie so he follows Don’s scent down an obscure tunnel.

In the Battle Nexus, Leonardo, Oroku Yoshi, Jorut and E’ro’chk are getting a ride back to the living quarters. Along the way, Oroku Yoshi explains that the Warriors of Perfect Virtue (called the Virtuous, for short) are a race who view gender as a sin and thus bioengineered themselves to reproduce asexually.  They are fanatical in their religious devotion and have been amassing armies to conquer other worlds and spread their creed.  They also despise magic and sorcery.  At one point, Yoshi saved a mage from three of the Virtuous, killing two of them and chopping the hand off the other.  For this, he has been hounded by them ever since. 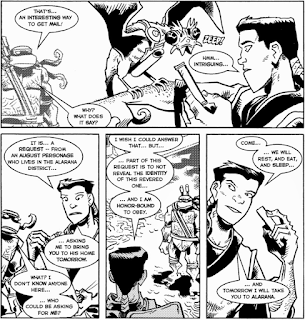 As the group breaks up to head to their quarters, Yoshi receives a hailbat message from a mysterious individual living in the Alarana district who wishes to remain nameless.  The individual requests that Yoshi bring Leonardo to him in the morning.

On the Styracodon planet of Maklar Votis, Michelangelo is busy using his new weapons to slaughter more Styracodon soldiers.  Evidently, this is the fourth Styracodon planet the Triceratons have conquered since beginning their campaign.  Captain T’Zirk compliments Mikey on his technique and brings him good news: The prison world where he and Azokk were held captive, Nurgostu, is next in line.  Mikey is thrilled, as he desperately wants revenge against the Regenta. 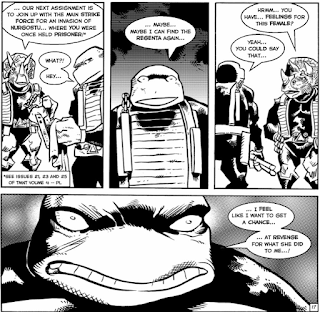 Down in the sewers, Raphael sniffs his way into Donatello’s secret lab.  There, he finds Donatello (shrunken and piloting his robot body) performing experiments on what looks like the corpse of Splinter floating in a tube.  Raphael loses it and begins savagely attacking Donatello for defiling their Master’s body, ripping Don’s robot body to pieces.  Working himself into a frenzy trying to catch the miniscule Donatello, Raph begins to feel woozy.  Suddenly, he starts to de-mutate and collapses onto the floor. 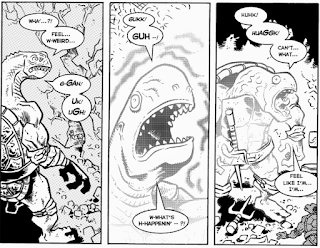 Later, Raph wakes up, back in his old Ninja Turtle form and lashed to the floor.  Don suggests that the flood of adrenaline caused his body to burn off the “vampire” toxins, thus restoring him to normal.  The ropes, however, are to keep him under control until Donnie can explain what’s going on. 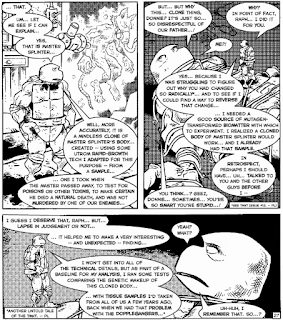 Don says that during Splinter’s funeral, he took a DNA sample from his body.  When Raph became mutated by the fake vampires, he decided to use Splinter’s DNA to clone a mindless body.  The mutated blood in the cadaver would help him find a cure for Raph’s predicament (or so he thought).  However, as he studied the clone and compared its DNA with older samples of Splinter’s DNA (taken during an incident involving doppelgangers), Donatello came to a startling conclusion: The Splinter who died was NOT the real Splinter.

*CHET ALERT: “Chet’s Toys” appears on Page 7.  “Chet” was an Easter egg the Mirage crew often threw into their comics because… they just liked the name!

*Donatello mentions a battle against doppelgangers.  An editor’s note refers to this as an Untold Tale of the TMNT, so we don’t know anything else about that adventure.

*This issue was not released direct to market.  A free version was made available online via Peter’s Laird’s TMNT blog.  A physical copy was published, limited to 1000 copies, and sold via the Mirage Comics website.

*This issue also featured a blank sketch page and a bonus retrospective on the original Mirage offices in Sharon, Connecticut.

Now I can finally die.

So this is where we leave things off in the Mirage universe.  There are, of course, various stories set in the future of this timeline, but so far as the contemporary narrative is concerned, this is the termination point.  Will Laird continue Volume 4?  Will we get any answers?  A conclusion?

I dunno.  But it took almost five years just to get this issue, so I wouldn’t hold my breath if I were you.

To go through the arcs one at a time, let’s start with Gameraph’s.  It looks like Raphael’s mutated monster days are over and I’m left wondering just what the heck was the point of it all?  What narrative purpose did it serve?  How did Raphael grow and learn and change from the experience?  What did it accomplish?

Fact of the matter is, the whole Gameraph arc amounted to absolutely nothing.  Raph turned into a monster and lumbered around for fifteen or sixteen issues and then unceremoniously returned to normal.  It only seemed to happen so that he’d have something to DO, even if it led nowhere.  Is Raph somehow a more humbled individual with a better handle on his rage, now that he’s seen his inner ugliness manifest on the outside and had to endure the consequences?  Nah.

April, Casey and Karai seem to be on target for an “awkward” moment.  Karai is dropping Casey off at his place just as April is returning home.  Karai asks to use his “facilities” while she’s there, too.  So, who wants to bet that just as April returns home and she and Casey have a heartfelt reunion, Karai steps out of the bathroom and April’s all “What’s SHE doing here!?” ...?

Hmm, maybe Laird doesn’t have to write another issue; the plots seem to telegraph themselves pretty intuitively.

Then there’s Leo, Oroku Yoshi, the Virtuous and what appears to be Splinter… maybe even the REAL Splinter?  I’ll save my Splinter talk for a moment, but as for Leo, he’s putting together some of the details about the Virtuous and their assault on the Foot Clan.  From what we’ve seen, it appears that the Foot have been trying to publish a book of spells and the Virtuous, in both their zeal to conquer other worlds and to eliminate all sorcery, have begun waging war on the Foot Clan.

Is that really it?  A flimsy “world domination” scheme?  I’ve got to believe there’s more to it than that.  We still don’t know what was up with Karai’s “odd” behavior, as Leo described it.  Is she under some sort of control?  Is that why she’s messing with Casey?  Does it have anything to do with anything?

I guess these plots aren’t telegraphing themselves as much as I suggested they were.

Mikey is going bonkers up in space, slaughtering Styracodons left and right, conquering planets and loving the hell out of it.  I want to think that there’s something else to it, like maybe he’s being manipulated emotionally by the Triceratons to use his skills as a weapon, because Mikey is just a pure psychopath at this point.  If there isn't some contrivance to explain his blood-thirsty lunacy, then it's just way out of character.

And that brings us to Donatello.  With his robot body destroyed, hopefully that means he’ll be getting back to his normal size sometime soon (if we get any further installments).  I’m glad to see that in this “final” issue of the series, we got at least ONE solid (or somewhat solid) answer to a lingering mystery: What Donatello took from Splinter’s body during the funeral.  It leads into yet another mystery, sure, but something is better than nothing.

I don’t want to jump ahead of myself, but I also don’t want to wait another five years to talk about it, so I’ll just say that I’m really not big on the idea that Splinter is still alive and his death was just a fake-out.  That’s some straight up Marvel/DC comic book storytelling; the meaningless death done for shock value and then undone a little while later.  I hate that sort of thing and I’d hoped TMNT was better than that.

Laird also drops an “Untold Tale of the TMNT” reference in there, which at this point I find utterly baffling.  He produces maybe 3 issues of TMNT a decade and he’s dropping references to stories from the past that will be revealed at a later date?  Man, it’ll be a miracle if Volume 4 ever sees completion, much less a bunch of Tales bonus stories.

If it makes anybody feel any better, Jim Lawson did post this pin-up online earlier this year.  He calls it the “last scene of Volume 4”, albeit with the qualifier that it may wind up being a “what if” scenario since Volume 4 is still incomplete and things could change.  Be that as it may, this is probably as near to closure as we’re going to get: 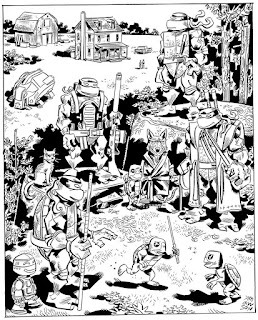 Take your time and let everything in that pin-up sink in.  Them's some ugly babies.

Anyway, I’m now all out of Mirage comics to review.  I’ve got some odds and ends left, like a bunch of UK comics, and the IDW series is still ongoing, of course.  But with Archie, Image and now Mirage out of the way, most of my work here is done.  I guess I’ll focus primarily on the cartoons and movies from here on out.

Quite frankly, I never thought I’d make it this far.