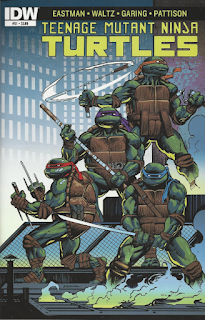 At an abandoned warehouse, Donatello, Leonardo and Raphael survey a meeting between the Mafia and a new tech-based gang called the Street Phantoms.  Don is shocked when Harold’s equipment can’t get a bead on the Street Phantoms and thinks that the enemy tech looks strangely familiar. 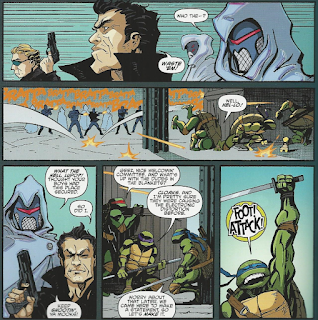 Leo orders his brothers and the Foot Soldiers to engage the enemy and they attack.  Jammer, leader of the Street Phantoms, orders his men to retreat and the cloaked gangsters phase through the ground and vanish.  Lupo, leader of the mobsters, is left behind to be interrogated.  A Foot Assassin wants to torture him, but Leo insists on enforcing the “no killing” policy.  All they learn from Lupo is that word is getting out that the Foot Clan have gone soft and now all the gangs that once served them are hoping to revolt.

Afterward, the Turtles split up: Leo to report back to Splinter, Don to ask Harold about the tech, and Raph to go do something private.  As they leave, a female Foot Assassin watches them from the shadows.

At Foot Clan HQ, Splinter ponders how defeating his greatest enemy and becoming Jonin of the Foot Clan has brought him no peace of mind.  With Michelangelo walking out on the family, Bebop and Rocksteady swearing revenge against the Clan and other forces vying for control of the city, Splinter feels his troubles have only compounded. 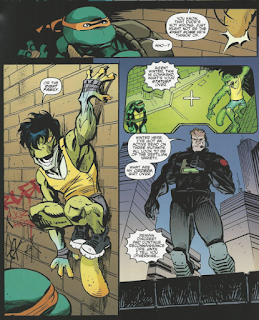 In an alley, Mikey saves an old lady from a purse-snatcher.  Raph interrupts and tries to convince Mikey to return to his family, but so long as Splinter is leading the Foot Clan, Mikey wants nothing to do with them.  After Raph leaves, Mondo Gecko confronts Mikey and suggests that he try throwing in with a new family.  Unbeknownst to either of them, a soldier named Agent Winter is watching them and reporting back to a mysterious commander.

At Foot HQ, April delivers a meal to Kitsune, who has been under house arrest since Splinter took over.  April reveals to Kitsune that she knows all about her and her siblings.  She knows Kitsune is playing “the game” and will be watching her intently.  After April leaves, Kitsune summons Alopex and tells her that they’ll have to step up their plans. 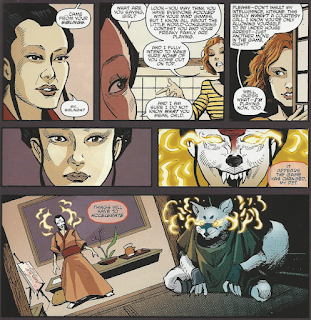 Elsewhere in the HQ, Leo tells Splinter how the raid went.  Leo is uncomfortable with his new role as Chunin of the Foot, but Splinter insists that they keep a strong appearance, as a power vacuum in the city could lead to another gang war.

At Harold’s lab, the scientist is working on Metalhead Mark Two when Don shows up.  Don asks him about the “cloaking cloaks”, saying that they’re similar to the tech Nobody uses but more advanced.  Enraged, Harold explains that he used to have a partner and they developed the cloaks together.  However, she betrayed him, stole the tech and used it to become filthy rich.  Harold warns Don that whoever is funding the Street Phantoms is not to be trifled with, as such tech does not come cheap. 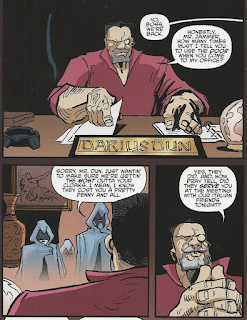 At Dun Import/Export, the boss, Darius Dun, meets with Jammer and Maze of the Street Phantoms.  Jammer tells Dun that the Foot Clan still seem to be as formidable as ever, but is interrupted by the female Foot Assassin, who corrects him and says that the Foot are growing weak.

*Raph mentions his time on the streets, which was resolved in TMNT (IDW) #4.

*April learned about Kitsune's siblings and "the game" in TMNT: Casey & April #4.

*Darius Dun, Jammer(head) and the Street Phantoms are villains who originated from the 4Kids TMNT cartoon.  Specifically, they were featured in season 6; the Fast Forward era.

The new era of IDW’s TMNT series has begun and on the surface it looks and feels very different from the previous one.  Skipping ahead a month in the narrative, right off the bat we’re treated to a very unusual scenario, as the Turtles lead the Foot Clan, Mikey plays Lone Wolf and hoooooly shit that’s a lot of Fast Forward references I was not anticipating.

This introductory issue is exactly what it is: An introductory issue.  There’s a recap of the previous arc to explain how we got here and the pacing is a rapid-fire tour of the new landscape and status quo.  It’s very hurried, perhaps a little spastic, but this is a “jumping-on point”, as it’s called in the comics world, so all this is for the benefit of potential new readers.

With no supplementary miniseries on the schedule until the Batman/TMNT thing is over with (which, according to Curnow, will not be part of the IDW canon), the burden of supporting the IDW TMNT universe will be squarely on the shoulders of the ongoing.  I hope it can manage the challenge on its own and a good strategy might be to slow down with all the new story arcs and let the plots breath a bit.  As it is, this first chapter kicks things off by throwing us in sixteen different directions, and while all very intriguing, I would like to see the series relax a bit with the storylines and let the characters have a chance to shine again.

But to talk about them, let's start with Harold and his cryptic references to a female partner who betrayed him.  I’m wondering if that will turn out to be Null, who was introduced back in the Mutanimals miniseries but never received much back story or personality beyond “evil”.  It would be an interesting way to tie everything together, as you’ve got Harold’s mysterious ex-partner selling weapons to Darius and the Street Phantoms, who in turn are trying to overthrow the Foot Clan.  Meanwhile, you’ve got Mikey potentially hooking up with the Mutanimals, and they’ve been waging war with Null.  So yeah, a lot of opportunity for interconnectivity.

As for the Street Phantoms and Darius, I must say, that was a legit surprise.  I never expected to see Fast Forward characters show up again.  Like, never ever.

I do wonder how much they’ll be altered to fit this new narrative setting.  Will Darius hold any sort of familial relationship to the Jones/O’Neil family or is he a totally separate individual?  They call the leader of the Street Phantoms Jammer rather than Jammerhead, as he was called in the cartoon.  Will he get his ability to download skills into his brain later on (or maybe he already has them)?

There was nothing wrong conceptually with most of the Fast Forward villains; some of them even had pretty cool powers and visuals.  The issue was more that they were trapped in a shitty cartoon that didn’t use them to their full potential.  “No such thing as bad characters, just bad writers” and all that.  So maybe Waltz and the gang can get some mileage out of them.  Let’s at least give these characters a second chance.

There’s also April revealing she’s onto Kitstune, Kitsune further manipulating Alopex, Agent Winter monitoring Mikey and Mondo for a mysterious commander (Null?  Bishop?), Splinter dealing with the stress of leading the Foot Clan, Leo dealing with the stress of also leading the Foot Clan, a female Foot Assassin out to betray the Clan, another gang war perhaps on the horizon, Metalhead getting rebuilt, and allllll the other stuff left over from the last arc that this comic didn’t have space to pick up on (Leatherhead?).

You see what I mean about there being a LOT of threads going on simultaneously, right?

Ken Garing is on art duties for this issue and I think the next, so he’s set for a short run.  His style is less animated than Smith and Santolouco and has a “Mirage” feel to it that I rather like.  The Turtles are rounder and bulkier and lack the individualizing features the previous artists drew them with.  They aren’t “cute”, either, and look fairly mean and sort of ugly.  It’s a major deviation from Santolouco/Smith and, again, helps to register that this is a new era for the book (though Santolouco is scheduled to come back after the next story arc, according to the editor’s notes in the letters page).

While I like Garing’s Turtles, I’m not quite sold on a few of his other character designs.  Splinter has this big fat chin flap that makes him look like a furry toad and his April looks like Sigourney Weaver.  Beyond that, though, I’ve few other grievances with his work.  The Street Phantoms look great and there are little Easter eggs thrown in (like Mikey using the grappling hook of his Fred Wolf counterpart to snag the purse-snatcher).

This new era is certainly interesting, but it's mostly a superficial change, it seems.  The prioritizing of two dozen storylines over character focus remains as it was in the previous era and that was the one change I was really hoping for.  Nevertheless, I’m certainly intrigued by what’s been set up.  With luck, none of the plot threads will be shortchanged.