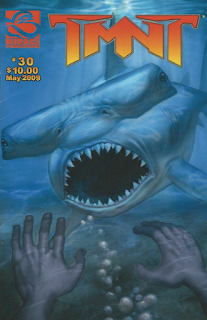 Casey awakens in Karai’s bed with a massive hangover.  With no memory of what happened after Karai gave him a ride back to her place, Casey shambles out into the gym and sees Karai swimming in the pool.  He also sees a hammerhead shark bearing down on her and leaps into the water to tackle it.  The shark goes limp and Karai helps him out of the water. 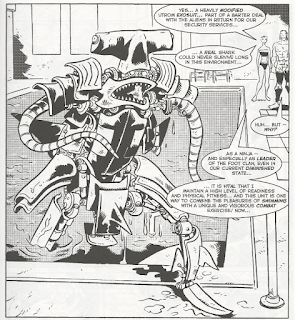 As it turns out, the shark was a robot made from an Utrom exosuit which Karai uses for training purposes.  She invites Casey to the kitchen so she can fix him some tea for his hangover.  Casey asks what happened after she took him home and Karai says that maybe they shouldn’t talk about it right now.

On the Triceraton Homeworld, Michelangelo is brought before the High Council of the Triceraton Republic.  They demand his testimony as to his part in the death of Azokk on the Styracodon prison world Nurgostu.  Mikey summarizes what happened and the Council convenes behind the “curtain shield”, a barrier where time passes slower within the curtain than without. 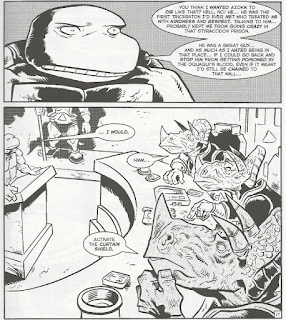 20 minutes later (13 hours within the curtain), the Council comes to a decision and determines that Mikey’s testimony corroborates with Captain T’Zirk’s as well as all DNA and surveillance evidence.  They explain that Azokk was one of the Republic’s few philosophers and diplomats.  He was nearing a peace accord with the Styracodons when he vanished many years ago.  The Council concludes that the Styracodons held him captive to sabotage the peace treaty and with this new evidence they declare all-out war on the Styracodons and their Protoceraton allies. 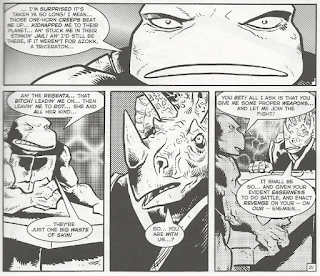 Mikey, much to their surprise, is a-ok with the declaration.  In fact, he’s so hot for revenge against the Styracodons and (especially) the Regenta that he asks to join Captain T’Zirk for the frontline assault.  T’Zirk fits Mikey with stealth gear and weapons and the Turtle is officially inducted into the Triceraton unit known as “T’Zirk’s Terrors”.

*As Casey passes a suit of samurai armor, he remarks that it looks similar to the suit given to Leonardo by Miyamoto Usagi.  The story in which Usagi gave Leo a set of armor is another As Yet Untold Tale of the TMNT.  The last recorded adventure between the Turtles and Usagi was in Usagi Yojimbo (Vol. 2) #3.

*Casey mistakes the robot shark in Karai’s pool as a Foot Mystic.  Casey fought the Shark-Shredder-Foot Mystic hybrid in Tales of the TMNT (Vol. 2) #33.

*In the letters page, Laird is asked how long it would take him to wrap up the Volume 4 storyline.  His response: “My gut feeling is that I can wrap up everything in about six issues.  However, given the way this comic series has evolved as each issue has come out, it may take more or less issues – probably a few more.”

*This issue was not released direct to market.  This issue was limited to 1000 print copies, available directly from the Mirage Comics website.  An online version was made available for free on Wowio.com, but has since been taken down.

Focusing only on two narrative threads, this issue was pretty enjoyable at least in comparison with the company it keeps.

Casey jumping into the pool to fight the robot shark was sort of pointless, but I guess it was thrown in so that the issue would have SOME sort of action in it.  Otherwise, it would have been an “all talking” issue and those aren’t very exciting.  There are little references here and there, such as confirmation that the TMNT/Usagi Yojimbo crossovers are canon to the Mirage universe and even a nod to Casey’s battle with the Shark Shredder from Tales of the TMNT.  Altogether, it's an alright way to open the issue, clumsy explanatory dialogue notwithstanding.

The big mystery is whether Casey slept with Karai while he was drunk and she’ll continue to be pretty coy about it.  It’s another one of those Volume 4 mysteries I don’t think we ever got solved.  In the letters page of this issue, Laird guesstimates another 6 issues before Volume 4 would be finished (though admits it’ll probably be more).  With 2 more issues released since this one was published, that means 4 more issues are left for the series.  That’s gonna be a LOT of mysteries to unravel in rapid succession if Laird sticks to that schedule (doubtful he will).

The lion’s share of #30 is focused on Mikey’s narrative and while it’s the “all-talking” segment, I found it pretty enjoyable.  The extended length means that there’s actually time to DEVELOP the story, so you have the opportunity to feel kind of sucked into the Triceraton/Styracodon/Protoceraton politics.

Speaking of that, I guess the Regenta isn’t a Styracodon?  She’s a Protoceraton?  I believe this is the first time the Protoceraton race has been mentioned by name; up until now I just assumed the Regenta was a Styracodon.  It’s a weird designation to drop so casually this far into the series (though I think Laird might have mentioned offhandedly in the letters page at some point that Seri might not have been a Styracodon).

Another little thing I dug was the idea that Azokk, as a philosopher and diplomat, was considered a “national treasure” by the Triceraton Republic.  Being such a war-like race, diplomats come around rarely, so his skills were genuinely irreplaceable when he vanished.  It plays the Triceratons in two interesting ways: We most often see them as violent brutes who detest weakness, but at the same time, they prize their intellectuals and ambassadors for their uncommon and vital skills.

What weighs Mikey’s half of the issue down is the last six pages in the hangar.  T’Zirk gives this long, rambling introduction to DUN DUN DUUUUUUUUN!  Mikey in a commando outfit!  Shock and AWE!

The problem is that Mikey was shown in his commando outfit with laser nunchakus, leading a group of Triceratons on the cover of TMNT (Vol. 4) #27.  Yeah, I dunno why they published that cover 3 issues before the events depicted on it actually happened, but it pretty much killed the labored build-up at the end of this issue.