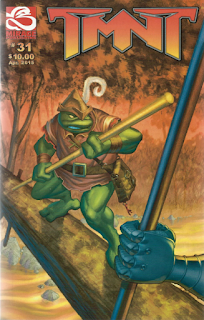 The Triceraton armada begins its all-out campaign against the Styracodons by bombarding their colony planet, Nurthoon, with phage missiles.  The missiles deliver a chemical payload that dissolve the flesh of numerous unsuspecting Styracodons.  Michelangelo finds the tactic revolting, but Captain T’Zirk insists that it’s more humane, as softening the Styracodon resistance force will lead to fewer deaths when their troopers invade the planet.  T’Zirk admits that the battle will not be easier, however, but Mikey is eager to get his feet on the ground and bash some Styracodons. 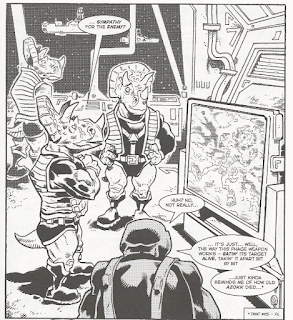 Down in the sewer lair, the shrunken Donatello is sleeping soundly inside his robot body.  He dreams…

Donatello is on his way from Nothamptonshire when he finds a log spanning a river; the only way across.  As he crosses, he’s confronted by the Dark Master of Shredwood Forest (a Shredder-like knight).  The Dark Master refuses him passage and the two duel on the log.  Donatello goads the Dark Master into rushing him and easily knocks him off the log and into the water.  The Dark Master’s helmet pops off, revealing Casey Jones, who mumbles something existential about April… 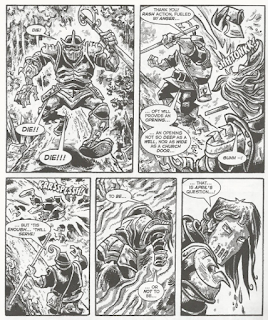 Donatello is woken from his sleep by the ringing of his cell phone.  Donnie answers it and is surprised to hear the sound of April’s voice.  She says that she’s in Nevada and plans on coming home from her road trip.  Donnie gives her a rundown of what’s been going on since she left, but April abruptly has to hang up.  A gang of redneck Harley Davidson enthusiasts are incensed at the sight of her Honda motorcycle and decide to pour beer all over it. 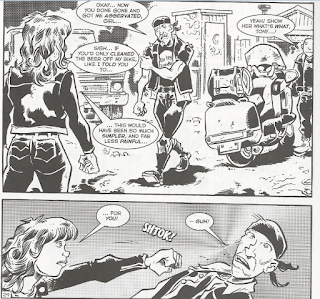 April confronts the bikers before they can slash her tires and they try to beat her up for riding a “Jap” bike.  April uses her ninja training to take them all down and forces the last one to clean the beer off her bike with his do-rag.  The rednecks then scurry away, proving once and for all that only racist cowards prefer Harley Davidson motorcycles (don't get mad at me; I didn't write the comic).  April hits the road, hoping to reach Massachusetts in a few days. 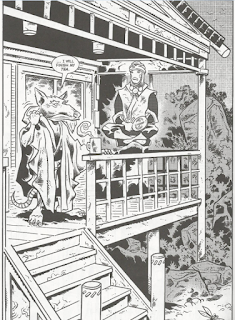 *Donatello and Casey had an argument that ended with Donnie knocking Casey off a log and into a river in TMNT (Vol. 1) #49.

*Donatello was the first one April spoke to before going on her road trip in the short “This Mortal Shell”, so it makes sense that he’d be the first she contacts on her way back.

*April found the answers she was looking for on her road trip in Tales of the TMNT (Vol. 2) #27.

*This issue was not released direct to market.  It was originally published exclusively online via Peter Laird’s TMNT blog in October, 2010.  It was eventually published in a physical format, limited to 1000 copies, in April, 2015.

*As a result of this delay in physical publication, TMNT (Vol. 4) #32 was actually published first.

Free comics: You get what you pay for.

Or that was the attitude for about five years, before a physical copy of this issue was published and I had to pay for it.  Now I’m free to have any critical opinion I want!

Mikey seems to be acting maybe a little out of character in his arc.  I know the Styracodons put him through Hell, but seeing him this enthusiastic about wholesale slaughter, slaughter which he’s eager to participate in, just doesn’t seem like him.  Maybe Laird is going for the idea that Mikey’s finally “snapped” or maybe we just don’t know the whole story yet, I dunno.  But man, Mikey is all about fuckin’ murder.

Donatello’s dream sequence is one of those things that doesn’t appear to serve any narrative purpose, it’s just there.  I’m guessing Laird put it in there because he thought it would be fun to write and see Lawson draw, and since this is his comic and all he’s got every right to put something in there for his own amusement even if it wastes time.

A bit more self-indulgent is April’s segment, where she fights a bunch of rednecks wearing Harley Davidson t-shirts who just hate-hate-HATE “ricer bikes”.  Laird caricatures the mortal hell out of the opposing side because I don’t even fucking know why this scene had to be there.  Laird just really, REALLY wanted everyone to know that Harley enthusiasts are all racist drunks with poor taste in beer (yes, April even mocks the beer they like, because everything they do is wrong).

Now, Peter Laird is a motorcycle fan and his favorite companies are Moto Guzzi and Honda.  How do I know this?  Because he mentions it ALL THE FUCKING TIME in these damn comics.  He even inserted dialogue referencing Moto Guzzi in his heinous “remaster” of TMNT #1 (I’m not even fucking kidding).  It’s a case where the characters just devolve into mouthpieces to recite Laird’s opinions on something as frivolous as motorcycles, while all who dare oppose him are rendered as the most embarrassing sort of strawmen.

This is some terrible writing and you don’t have to give a shit about motorcycles to see it (I know I certainly don’t care about them).

Anyway, the fact that April instinctively calls Donatello with the news that she’s coming home seems like a callback to the short back-up strip “This Mortal Shell”.  In that story, April confers with Donatello before leaving on her trip, so the moments sort of act as bookends to her arc.

On the other hand, Laird said specifically that “This Mortal Shell” was a non-canon story (though I don’t know why), so if he WAS going for some sort of callback to it, that’s rather strange.

Oh yeah, and Splinter might be alive?  If that’s the same Splinter from the Mirage universe?  It’s been five years and we still don’t know for sure?  Yeah, I kinda don’t care anymore.

This was an extremely frivolous, self-indulgent issue that achieves next to nothing aside from sucking.  Laird must have been bullied on his Segway by some tough guys wearing Harley shirts and now he’s gotten even with them.  Yeah!  You sure showed THEM, Pete!