Tea-Time for a Turtle, Part 1 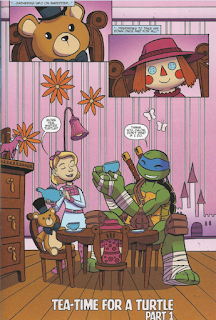 Down in the lair, Raphael is trouncing Donatello and Michelangelo at a game of video hockey.  Raph offers Leonardo to play winner, but Leo says he has some stealth training to do topside and awkwardly hurries away.  The other Turtles shrug, knowing that Leo never lightens up or has fun. 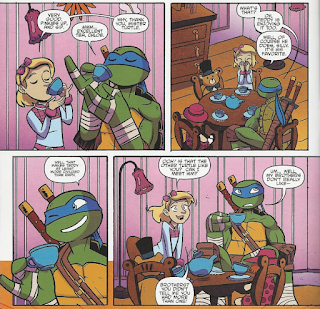 In reality, Leo has headed over to have a tea party with Chloe, the little girl he met back when Slash first appeared.  Evidently, Leo’s been joining her for tea-time for a while.  Chloe asks if Leo would invite his brothers to tea next time, but Leo suggests that they wouldn’t enjoy the experience as much as he does.

Back in the lair, Donnie receives a call from April.  Apparently, there’s a report of a mutant fly-man ransacking an abandoned computer lab and that can only mean Baxter Stockman.  The Turtles decide to go bust him up without Leo, as Baxter is no threat on his own.

The Turtles ambush Baxter as he tries to abscond with some high tech computer equipment, only to learn that THEY are the ones being ambushed.  Tiger Claw jets down from the sky and opens fire on the Turtles, quickly pinning them behind a dumpster.  They attempt to call Leo for back-up, but he isn’t answering. 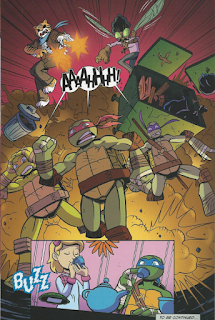 At Chloe’s place, Leo has set his T-Phone aside, as is the table rules.  Chloe insists that if he won’t invite his brothers to tea, then Leo must at least have one more cup with her before he leaves.  Leo obliges as his brothers continue to get shot at…

*This story is continued from TMNT Amazing Adventures #4.  The story continues in “Tea-Time for a Turtle, Part 2”.

*Leonardo had his tea party with Chloe in the season 2 episode “Slash and Destroy”.  Chloe has appeared in several episodes afterward, but usually as a crowd filler.

*Michelangelo suggests wearing his Turflytle costume to the altercation with Stockman.  The costume appeared in the season 2 episodes “The Mutation Situation” and “The Lonely Mutation of Baxter Stockman”.

I must be getting old; I’m not jaded or cynical about cute things anymore.  Or maybe I haven’t gotten old enough.

Whatever the case may be, this first half of the next story in Amazing Adventures was pretty cute.  Peter DiCicco pens a lot of horseplay and brotherly taunting between Raph, Mikey and Donnie.  While it might seem a little excessive (that’s ALL those characters seem to do in this story), it’s actually rather cleverly implemented.  Seeing those three engaging in so much immature roughhousing and masculine ribbing, one can sympathize with Leo trying to keep his friendship with Chloe a secret.

What works about it is that Leo never has to have some sort of clumsy inner monologue describing his feelings, 'Oh no, if my brothers found out I like sipping tea with a little girl they’ll never let me live it down!' etc.  You put the pieces together on your own, which may not seem difficult for us adults reading children's comic books, but it’s always nice when a kid’s comic offers the target audience a little bit of intellectual credit.

Also, Leo befriending Chloe was something more than just a silly throwback to a quick gag from one episode.  After acquiring April and Casey, the Turtles sort of quit trying to make human friends in the Nickelodeon cartoon.  The Turtles are actually pretty social characters and I can believe they’d jump on any opportunity to be friends with humans that they can get, even if one is a little girl that likes tea parties.

As for the bad guys, my only comment is that Michelangelo derisively refers to Baxter Stockman as “a level one boss”.  Clearly, Mikey’s been playing TMNT: Turtles in Time.  “Scene 1: Big Apple, 3 AM”

Chad Thomas continues to rock it on the art duties.  There are more of the little details in his pages that I love, especially that wood-paneled, trackball-controlled, 1980s arcade cocktail cabinet Raph and Donnie are playing on at the beginning. 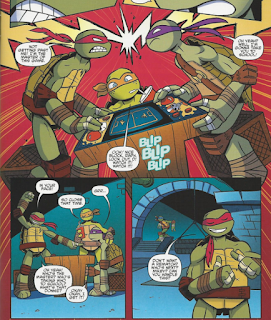 Man, I forgot all about arcade cocktail cabinets; they were more common in waiting rooms than in the actual arcades (there was a Ms. Pac-Man cocktail cabinet in the waiting room of my dentist’s office, way back when).  Look at that thing, the images on the screen are of hockey players, but the cabinet art features a guy wearing a football helmet.  Clearly this is one of those cabinets where you could select your “game mode” between different sports, but the field grid always stayed the same and the actual games were identical even if the sprites were different.

I could write ten more paragraphs about that imaginary arcade cocktail cabinet.  But I won’t.  Because I’m hungry.