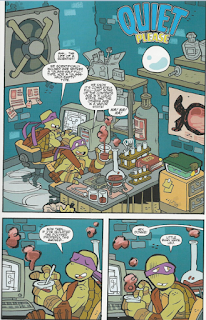 In his lab, Donatello is busy with an experiment when Leonardo barges in.  Leo’s looking for his sword and after Donnie assures him it isn’t there, he sends him away and gets back to work.  Then Raphael shows up to bully Donnie because he’s bored and has nothing better to do.  Once Raph’s gone, Donnie is about to get back to work when Michelangelo enters, giving a tour of Donnie’s lab to Ice Cream Kitty.  Eventually, Donnie drives them out. 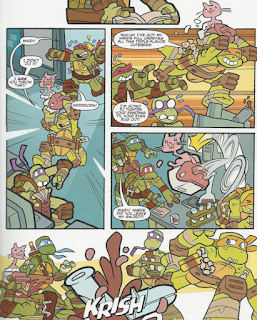 He’s about to get back to work when all three of his brothers and Ice Cream Kitty come barging back into the lab, fighting over something.  Their roughhousing ruins his experiment.  Finally fed up, Donatello goes off on them and chases them all out of his lab.

However, now it’s too quiet and he can’t get to work.

Later, April finds Donnie sitting under a sewer grate, listening to the loud racket of the city above.  She asks him why he chose there to work and Donnie says he thinks best when he has some white noise.

Ian Flynn’s the main writer over at Archie’s Sonic the Hedgehog book and the recently cancelled Mega Man book (was really digging that one).  He’s good at what he does; I'd like to see him write a longer form TMNT story, as a matter of fact.  The Setup – Punchline – The End formula of these back-ups are kind of constricting and it’s rare that anybody gets their best work out of them.

Coleman Engle’s art style is very sharp and I particularly like his use of line weight: big and thick for characters in the foreground, thinner and crisper for characters further back.  It has a Saturday morning cartoon look to it and reminds me of how Stephen Silver did line weight on shows like Clerks and Danny Phantom.

Facial expressions are, uh, “anime inspired”, I guess you’d call them.  They look fine and aren’t too overblown, and the aesthetic is certainly befitting of the source material (the Nick show resorts to anime expressions all the time for whatever reason).