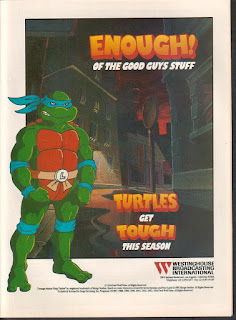 Well, I've made it to the "red sky" seasons of the original 1987 Teenage Mutant Ninja Turtles cartoon.  This is where things get EDGY!

A bunch of good episodes in this rather short (8 episode) season.  A rather cruddy three-parter in the middle, but it's still more exciting than many of the seasons before it.

Next up are the Lord Dregg seasons and then I'll be done.  Let's see if I can't knock seasons 9 and 10 out in a timely fashion.