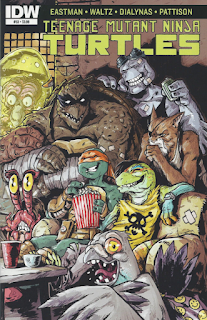 At Mutanimals HQ, the whole crew greets Michelangelo with one of Pigeon Pete’s special worm-cakes.  Mikey is happy to celebrate with his new friends, but declines Hob’s invitation to join the team.  While he doesn’t want to be a part of the Foot Clan, he doesn’t want to abandon his family completely, either. 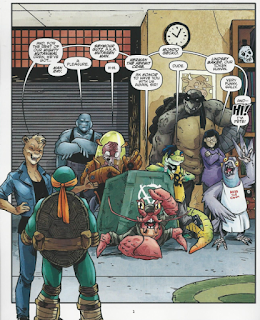 On a rooftop, Casey calls Detective Kara Lewis for an update on his escaped father.  Unfortunately, Lewis has yet to catch Hun due to a media gag order involving mutants.  Casey hangs up and is greeted by Raphael who asks how he and April have been doing.  Casey says that they’re just getting some space from each other; April’s working on the scroll and he’s doing the vigilante thing.

Back at Mutanimals HQ, Pete proves to be an idiot savant at board games, much to Mikey’s surprise.  Hob then interrupts the festivities with news of a weapons shipment at the docks.  Being “heroes” and all, the Mutanimals head to stop the shipment, armed with weapons they stole from Null.  Mikey decides to go along.

At April’s place, she’s busy studying the scroll when her mother comes to see her.  Mrs. O’Neil asks how things are going with Casey and April tells her that they’re just getting a little space.  Mrs. O’Neil tells April a story about how her marriage almost failed when she and Mr. O’Neil prioritized their work over their relationship.  She tells April that distance can help a couple see the big picture, but she has to use that time to actually figure things out. 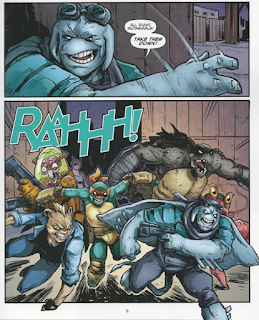 At the docks, the Mutanimals intercept Lupo and his weapons shipment.  They send the gangsters packing in record time and head back to HQ.  Unbeknownst to them, they’re being watched by Agent Winter.  His commander tells him not to be concerned with the weapons shipment and to keep tabs on the mutants.

At Dun (one “n”) Import-Export, Darius Dunn (two “n”s) gets a report from Jammer about Lupo’s failure thanks to the interference of the Mutanimals.  Fed up with the Foot Clan and the Mutanimals getting in his way, Dunn vows to ignite a war and orders Jemmer to fetch “The Inventor”. 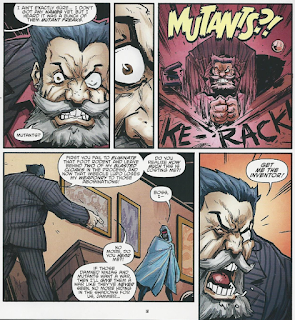 At Mutanimals HQ, everyone celebrates with a pizza, all save for Hob, who leaves to “take care of” the weapons they seized.  Mikey asks Slash what Hob does with the weapons they intercept and Slash presumes he destroys them.  Mikey isn’t buying that and clings to the back of the van as Hob pulls out (unaware that Mondo Gecko is watching him). 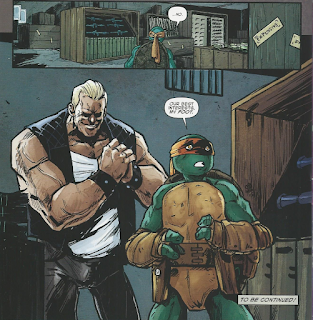 Mikey arrives at a warehouse and sneaks in through the window.  To his horror, he discovers that Hob has been stockpiling all the seized weapons.  What Mikey doesn’t know is that Hun is sneaking up behind him.

*Hob stole the weapons from Null in Mutanimals #4.

*Check the posters on the wall of Mutanimal HQ and you’ll notice quite a few Archie TMNT Adventures references: Ace Duck, Cryin’ Houn’, Cudley the Cowlick, and Acme Traps (from TMNT Adventures #22).  Also an angry starfish and a guy in a helmet and goggles I don’t recognize.

*This issue was originally published with 3 variant covers: Regular Cover by Dialynas, Incentive Cover by Atilio Rojo, and Subscription Cover by Eastman and Pattison.

I enjoyed their miniseries, so I was hoping for more Mutanimals-focused stories in the ongoing series.  Looks like I’m finally getting my wish with this two-parter.

Mikey’s exile from the Turtles has been an interesting development thus far.  As you’ve probably noticed by now, he’s abandoned his nunchakus in favor of the grappling hook, a nod to the old Fred Wolf cartoon where he was forced to make that swap to appease outraged Europeans (I hear they’ve since gotten over their nunchaku phobia).  The fact that he wanders right into the wings of the Mutanimals was a solid way to get that team back into the plot and I love seeing all those colorful faces again.

Hob, as it seems, hasn’t gone over to the side of the angels just yet.  You got that notion back when he busted Hun out, but it’s a bit clearer now.  Hob does have his own twisted sense of altruism and honor, though, so I don’t think he’s gone completely “bad” (at least not from his POV).  You also have to wonder how many of the Mutanimals are in on his collaboration with Hun?  Slash didn’t seem to know about Hob’s weapons stockpile, but Herman the Hermit Crab was the one who helped bust Hun, so presumably he’s in on it?

Lovin’ all this intrigue.

The various plot threads are folding together nicely and it looks like we’re headed toward another gang war story arc.  “City Fall” wasn’t perfect, though I enjoyed it, and I think one thing that could have improved it might have been if the various gangs being taken down by the Foot Clan had been given stronger identities.  In this situation, it looks like there are going to be at least three major factions: Splinter’s Foot Clan, Hob’s Mutanimals and Darius Dun’s Street Phantoms (or whoever make up the bulk of his forces).  We’ve already got a more colorful cast of characters this time around, so if IDW is indeed headed toward another gang war, I think it’ll turn out to be more interesting than before.

That said, I do wish they’d decide how they want to spell Dun’s name (either one “n” or two).

The other storyline progressed in this issue is April/Casey.  Though “progressed” might not be the word for it.  As dire as the Casey & April miniseries was, it still ended with the two lovebirds realizing how much they care for one another and coming together stronger than ever.  Now it seems like they’re suddenly and inexplicably drifting further apart.  Did they just forget about their declaration of love for each other or are we all just trying to forget that the Casey & April miniseries even happened?  Because I’d be surprisingly cooperative with the latter option.

New artist for this arc is Michael Dialynas and I think he’s pretty good.  He’s trying to stick to the aesthetic of Santolouco and Smith, at least more than Garing did, so folks looking for some visual cohesion may prefer his run.  While it has less of a personal fingerprint, I think his layouts and expressions look very lively and kinetic.  His pencils mesh better with Pattison’s colors than Garing's did, but again, that may be because Dialynas is trying harder to conform with Santouloco and Smith.

Dialynas puts a lot of humorous details into the expressions of the characters, from Dun losing his shit to Pete being… Pete.  His Mutagen Man stuck out to me; being less stylized than Kuhn’s rendition of the character, you can actually make out a few of the different animals that were supposedly combined to make him.  Or at the very least, you can now tell he’s got an equine’s skull (or part of it).  Dialynas left in Kuhn’s highly expressive eyeballs for Mutagen Man, so there’s this nice balance of comedy and grotesquery that makes the character so likeable.

I think this two-parter is shaping up to be a little more focused than the last one, even if I think these issues come across closer to a four-parter but with two slightly more distinct halves (does that make sense?).  It looks good and it’s got a ton of Mutanimal action.  I’m easy to please like that.

Grade: B (as in, “But Sally Pride and Man Ray would still benefit from a personality boost”.)